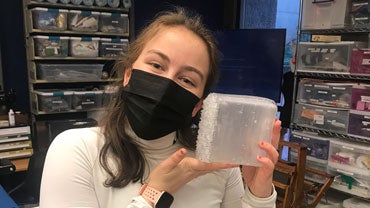 Composting can have significant environmental benefits, including reducing both the amount of kitchen waste sent to landfills and the production of harmful methane gas. But it can also be a challenging practice, particularly for people in small living spaces without a dedicated yard.

“I’ve been composting since about 2014 with my family, but when I tried to introduce it to my roommates when I came to Georgetown, everyone struggled with it,” said Gracey Owen (B’22). Existing countertop receptacles often attract bugs, and require special liners or charcoal filters to prevent odors—gear that costs money and can be difficult to find. “There’s a lot of consumer error that leads to odor and bugs, but if consumers are consistently mis-using a product, then it’s really a product issue,” Owen said.

Owen’s idea to counter these issues is Compost’d, a silicone composting container that can be stored in a freezer to minimize those issues. Compost’d is also flexible and collapsible, so it can fit into any size freezer. After developing the idea, she created renderings in TinkerCAD and 3D printed prototypes in the Library’s Maker Hub. The Maker Hub’s 3D printers allow for printing in a variety of materials and colors. “We actually printed Gracey’s final prototype with a flexible, rubber-like material, since she intends the final product to be made out of silicone,” said Maker Hub Manager David Strout.

Owen also entered pitch competitions through the McDonough School of Business to refine her idea and gauge interest in the product. “It was absolutely terrifying at first,” she said, even competitions that are small in scope like Rocket Pitch, which focuses on short elevator pitches for early-stage ideas. The response she received showed that a lot of people were interested in the product.

More recently, Owen competed in the 2021 Bark Tank pitch competition, winning $25,000 to help launch her business as well as the competition’s People’s Choice award. Owen hopes to bring the product to market this year.

Owen credits the Maker Hub with helping to accelerate development of the product. For-profit makerspaces typically require monthly subscriptions, usage fees, and costs for training or hiring expert engineers. She estimates prototypes could have cost $5,000 each, a prohibitive cost for her current cash flow. “The Maker Hub has been different, because people just want you to create,” she said. “It helped me to move so much faster.”