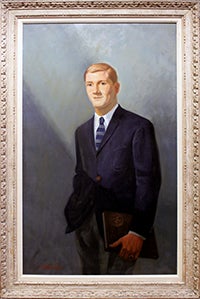 The Joseph Mark Lauinger Memorial Library is named in memory of a 1967 Georgetown alumnus who died in the Vietnam War in 1970, and in honor of all Georgetown graduates who lost their lives in all wars.

After graduation, Lauinger joined the United States Army. He was a first lieutenant when he was killed in action leading his platoon in Vietnam in January 1970. For his actions in Vietnam, he received several commendations, including a Silver Star, Bronze Star and Army Commendation. His medals are on display, along with his letters of commendation, in the Lauinger Library lobby, accompanied by the portrait pictured here. The portrait was painted by Jay O’Meilia of Tulsa, Oklahoma.

At the time of the Library’s opening in 1970, University President Robert J. Henle, S.J., stated that “The new library will stand, through Joseph, as a monument to the Georgetown men and women who have sacrificed and given of themselves, in peace as well as in war…. The name should provide the entire Georgetown community—students, faculty, Jesuits, alumni and friends—with an enduring impetus and a perpetual reminder of devoted service and supreme sacrifice.”