Over the past weeks, as part of my role as a summer student assistant in the Booth Center for Special Collections, I have been working on organizing and creating a finding aid for the J. Havens Richards S.J. Papers within the University Archives.. This collection consists of material on Father Richards’ life beyond his tenure as Georgetown’s President. The majority of the collection dates  from the time after his presidency.

Father Richards served as Georgetown’s 30th president, from 1888 until 1898. One of his obituaries notes that while the students did not love him, they certainly respected him.1 Perhaps partly due to this distance from the students he has not since received the same recognition as some of his predecessors or successors, although he worked tirelessly during his tenure to transform Georgetown into a modern university in the fullest sense of the word. He oversaw the enlargement of the Law and Medical Schools, including the construction of a new Law building and Georgetown’s first hospital. Other projects included the completion of Healy Hall and the construction of Dahlgren Chapel. In fact, Father Richards performed his duties with such vigor that he eventually had to step down, after what was described as a nervous attack brought on by overwork.

Given that the strains of the presidency had such a damaging effect on Father Richards’ health, one might have thought that he would not have kept up his work ethic in later years. The records suggest otherwise. Having left Georgetown, Father Richards served in numerous religious and educational positions at Jesuit institutions across the country: in Los Gatos, California; Boston; Buffalo; New York City; and Frederick, Maryland. During these years, he delivered numerous addresses, lectures, and lessons on topics ranging from Catholic women’s education to intemperance. The notes made and materials collected by Father Richards for these addresses make up the bulk of the collection. He also wrote and published a 400-page biography of his father Henry Livingston Richards in 1913. Finally in 1922, the year before his death, Father Richards wrote a play based on the lives of French Jesuit missionaries, titled “An Ambassador of Peace”, a copy of which can be found in the collection. Just as in his Georgetown days, Father Richards continued to work as much as he could.

Father Richards was a methodical worker, as is shown by the outlines which he produced for each of his addresses, which were clearly structured. He often produced several outlines of increasing detail for one address. A good example of this is the set of outlines Father Richards produced for an address given to the graduates of the Parish School of the Cathedral Chapel, Buffalo, on June 22, 1915, titled “The Building of the Temple.” In this address, Father Richards weaved together three of his most important values—patriotism, the Catholic faith, and dedication to study. He touched on each by highlighting the importance of freedom and law, religion, and constant practice for a complete education, akin to building a “Temple of God,” before concluding with an exhortation to “Study and live, as Americans and as Catholics!" 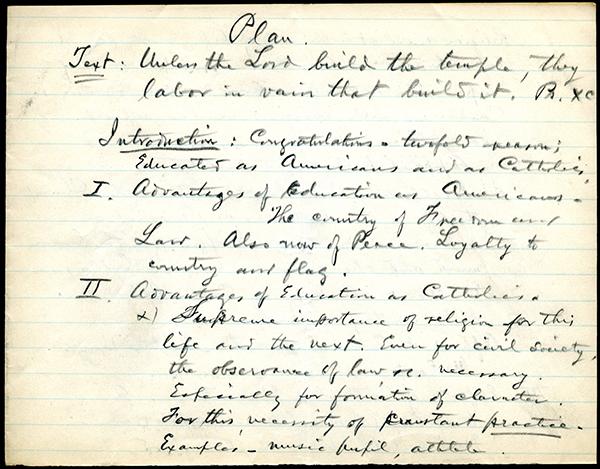 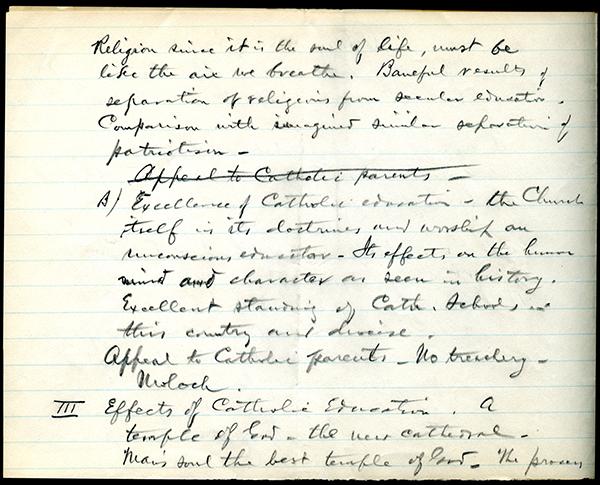 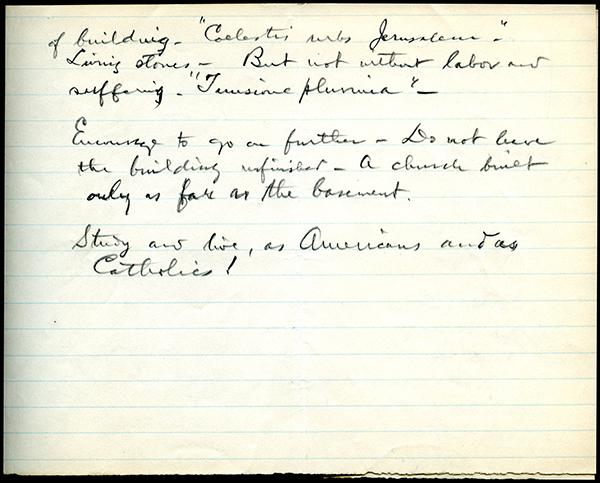 In his later years Father Richards remained not only committed to spreading the Catholic faith amongst youthful students, but also amongst adults. This is apparent from his polite yet unyielding and perhaps even stubborn correspondence with Judge Thomas C. T. Crain of New York, between 1920 and 1921, on the Catholic and Protestant faiths. In response to Crain’s explanation for his own Protestant convictions, Father Richards replied that while he respected Crain for his “solicitude to preserve your faith unshaken”, the Catholic Church’s direct lineage from the apostles and Christ himself meant that other Christian faiths possessed mere “fragments'' of the complete truths of Catholicism. To become more familiar with Catholicism would be to secure the “correction and completion” of one’s faith. He even attached a copy of his book describing his father’s life—after all, his father, originally an Episcopalian minister, converted to Catholicism just months after Richards’ birth. 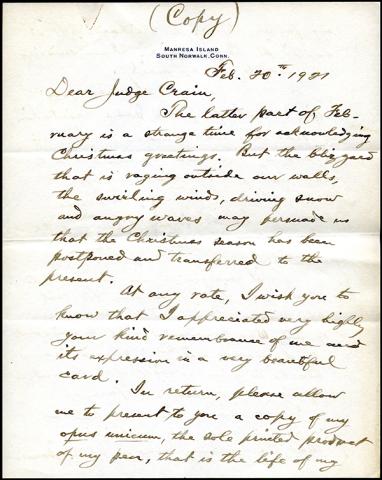 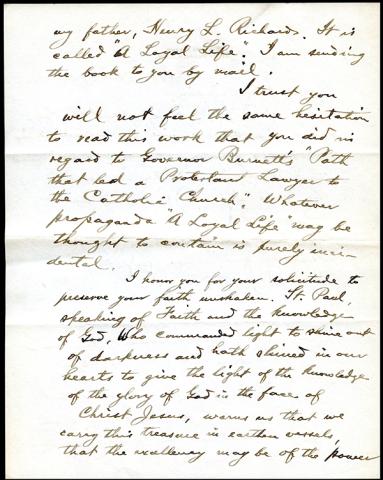 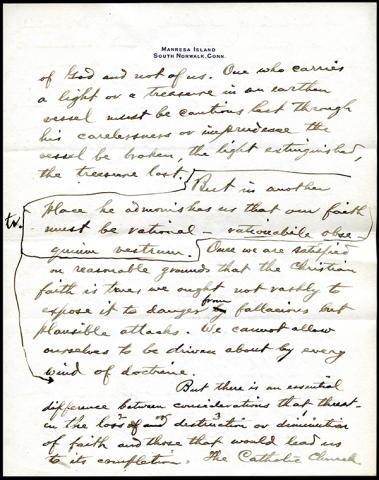 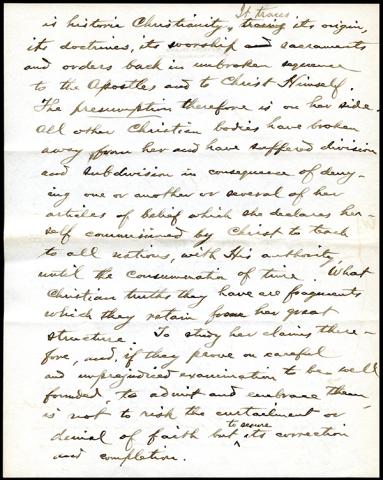 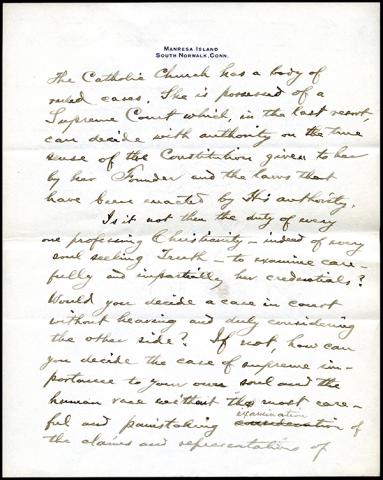 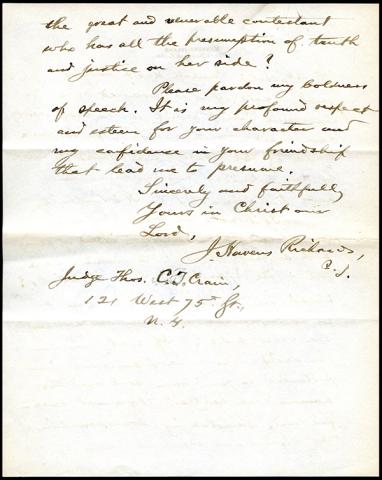 Father Richards died at the College of the Holy Cross on June 9, 1923, having suffered a series of strokes. Despite his significant achievements, Georgetown did not name any major buildings after him, as was done for President Patrick Francis Healy, S.J. or President Edward B. Bunn, S.J. However, Richards’ faith and commitment to Catholicism and the Society of Jesus clearly left a legacy amongst spiritual communities. In 1946, Ursuline nun Mother M. Loretta Griffin, O.S.U. sent a letter to Holy Cross, where Father Richards was buried, offering evidence that the dust from his grave had divine healing powers, and requesting “more dust from the grave and should there be any relics going about, I would appreciate one of these…”Father Richards may not be as revered as others in Georgetown’s memory, but I doubt any other Georgetown Presidents could claim such holiness as to have their remains sought out as relics.