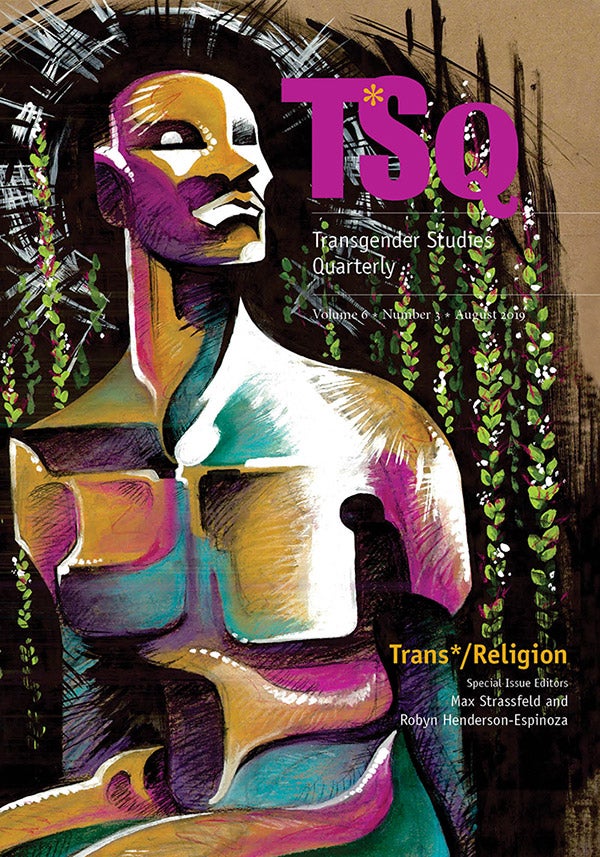 In 2008 Georgetown University Library received a grant from The Gladys Brooks Foundation to establish an endowment fund in support of the acquisitions of library materials in emerging disciplines (see Library Associates Newsletter Spring 2008, no. 87). This year Amy Phillips was awarded funding from the grant for the area of trans studies, religious and theological studies. Below, she gives an outline of the state of the field and a list of the new materials she has acquired with her Gladys Brooks Foundation grant:

“Might not trans theology be one technology by which trans activists, theologians, and scholars are reimagining both cosmology and ontology? Theology can function as a method of rethinking materiality and the conditions of embodiment outside its current constraints, which is part of what made it so attractive to early feminist theologians.” - Max Strassfeld and Robyn Henderson-Espinoza

The above quote comes from an introduction essay by Max Strassfeld and Robyn Henderson-Espinoza for a special issue of Transgender Studies Quarterly (TSQ) on Trans*/Religion (Volume 6, issue 3, August 2019). The special issue brought the most recent scholarship to the fore of what is a growing area of much needed attention not only in the academic pursuit of studying theology but in reflection on the practical and lived experience of transgender people in communities of faith. It is “an interdisciplinary field that draws upon the social sciences and psychology, the physical and life sciences, and the humanities and arts,” that is “as concerned with material conditions as it is with representations practices, and often pays particularly close attention to the interface between the two.” (Kelly quoting Stryker, page 10, see below)

Prior to this TSQ issue, another major publication bringing together scholars in this nascent field was the special issue of The Journal of Feminist Studies in Religion (volume 34, no. 1, Spring 2018). The issue was devoted solely to “Transing and Queering Feminst Studies and Practices of Religion''. Obviously, the title for my blog is based on this special issue.  Of note in this issue is the literature review of Trans* Studies in Religion by Siobhan M. Kelly entitled “Multiplicity and Contradiction” (pages 7-23). This article was key for me because I used it to expand my knowledge of the field and to select the landmark and most recent publications in this area for our library collection.

Below is the fruit of the Gladys Brooks Foundation Grant. I should note that some of the older titles represent prototypes or groundbreaking works in the field. I’ve organized the list starting with the most recent publications alphabetized by title. Please be aware that many of the books have not been received yet, so online books might not be available and physical books might not have arrived in the library yet.

Something that May Shock and Discredit You by Daniel Mallory Othberg. New York: Atria Books, 2020.

According to Whose Will: The Entanglements of Gender & Religion in the Lives of Transgender Jews with an Orthodox Background by Oriol Poveda. [Sweden]: Uppsala Universitet, 2017

Transgender Liturgies: Should the Church of England Develoop Materials to Mark the Gender Transition? By Martin Davie. London: The Latimer Trust, 2017

This is My Body: Hearing the Theology of Transgender Christians. Edited by Christina Beardsley and Michelle O’Brien. London: Darton, Longman & Todd, 2016

Take Back the Word: A Queer Reading of the Bible by Robert E Goss. Cleveland : Pilgrim Press, 2000