The Dogs of Georgetown

Therefore to this dog will I,
Tenderly not scornfully,
Render praise and favor.

The noble dog has shared man's adventures since prehistoric Times. His is thus a suitable figure to lead the Hoyas into athletic battle, exemplifying as he does the virtues of patience, stubborn courage, stamina, and loyalty. This is the story of Georgetown's canine collegians, be they blue blooded or blue collar, athletic or otherwise.

We don't really know how it began. We may assume there were dogs at Georgetown from the beginning. After all, the school ran a farm along the western edge of the campus until the twentieth century, and many of the students were rural in origin. However, as with so many facets of day-to-day life, there was no occasion to write about the dogs of Georgetown. They themselves did not keep diaries, and their expenses were not kept in detailed ledgers as were the student body's. As often happens, it took a breach of the peace to cause the first documentation referring to dogs at the College.

It seems that a terrier named "Rough And Ready" served as the guardian of the bakery and kitchen. There he ran off small boys bent on stealing pies and attempted to protect his territory from one Pompey Gavin, a large and apparently belligerent bulldog named for the college baker, the celebrated Brother Gavin. Pompey - "as bloody minded as his classic predecessor " -was determined to become top dog at the bakehouse. One fateful night in April 1862, matters came to a head. An epic dogfight ensued, and Rough was fatally injured.

The students decided to bring the miscreant to justice before a jury of his peers. They drew up a detailed indictment, which survives in the college archives. "Blocher" (a German shepherd, perhaps?) served as foreman (foredog?) of the jury. The verdict: guilty as charged. The sentence: banishment, in this case to the Georgetown Villa, which is now the McLean Gardens development on Wisconsin Avenue. According to the College Journal, Pompey was then poisoned by the Union soldiers occupying the villa. "He had been sent thither to protect the premises, and, emulating the example of the murdered Rough, fell a victim to his fidelity " - thus the dark and bloody ground of our early history.

Around the turn of the century, various dogs began to be associated with Georgetown athletics, at least on an informal basis. The first was an enormous canine of unspecified breed belonging to the Rev. William Carroll, S.J. Appropriately, this hound was said to delight in the name Hoya. Hoya, for reasons unknown, decided to adopt the Prep division football team. Unfortunately, he took the rivalry with the College team a bit too seriously, and was banished to Saint Thomas Manor in Charles County, Maryland, for biting halfbacks. It must have been an effective defensive tactic, at least. Richmond Jack, a contemporary of Hoya, was a purebred Russian wolfhound, born May 10, 1906. Though Richmond jack's pedigree remains in the archives, we have neither his job description nor obituary; thus his role at Georgetown must remain obscure.

In 1911, an otherwise unknown dog was called forth to meet the Virginia mascot (a pig) before the annual football game. According to the yearbook, our official mascot was a small boy. Was he sick that day? Or did someone decide that it was inappropriate to send a boy to do a dog's job? In any case, the unknown mascot led the Blue and Gray to victory, 9-0. It is evident from the single fuzzy photograph that survives in the University of Virginia archives that this otherwise unknown mascot numbered at least a few English bulldogs among his ancestors. This anonymous representative set a better example for the breed than did the brutal Pompey Gavin.

After the First World War, many veterans returned to the campus. Among them was one "Stubby", who was said to represent the breed Boston bull terrier in a rather general way. Stubby had joined the 102nd Infantry at Yale, where the division was in training, and accompanied them to the front as divisional mascot. After the war, he joined a colleague named J. Robert Conroy at the Georgetown University School of Law, where he served several terms as mascot to the football team. Between the halves, Stubby would nudge a football around the field, much to the delight of the crowd. This trick became a standard feature of the repertoire of Georgetown mascots throughout the twenties and thirties.

Stubby was followed by a succession of Boston bull terriers. The first and most famous was Hoya 1, who had been recruited from Green Bay, Wisconsin, by Paul Van Laanen (C'26). Hoya soon became a sidekick of the Rev. Vincent McDonough, S.J., who was prefect of discipline and moderator of athletics. ( The gymnasium is named in his honor.) While Father "Mac" kept his eye on the athletes, Hoya would work on his halftime routine. Al Philip Kane (C'28, L'32, GL'34) remembers that the spectators cheered as loudly for Hoya as they did for the team. Kane also points out that it was at this time that the newspapers began to refer to the team as "the Hoyas," rather than "Hilltoppers" or "the Blue and Gray." Pending further research, it does appear that the team was named for the dog, who was in turn named for the traditional cheer. Incidentally, Hoya was simply a nom de sport. His real name was "Jazz Bo." 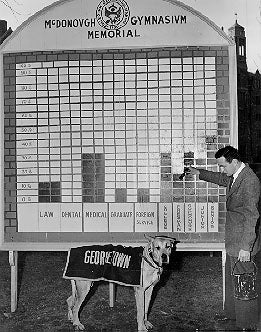 The line of succession was interrupted by World War II. The mascot's mantle passed to a charming Great Dane named Coulson's Hoya, a.k.a. "Butch". Butch was originally the mascot of a group in the Army Training Program at Georgetown. He stayed on at the college when his master was sent to the Far East. Butch lent his presence, which was considerable, to many campus occasions in the years following the war. He seems to have been a remarkably cooperative canine and was a particular favorite of newspaper photographers. At various times the papers featured Butch with a birthday cake; Butch with pretty girls; Butch with the Georgetown cannon; Butch posing as a photographer. It is surprising they didn't dress him up in white tie and tails -it would have fitted the sort of personality that comes across in the photographs.

In 1947, Butch suffered one of the occupational hazards of collegiate mascots: he was kidnapped by a group of young "scholars" from Fordham. Happily, he was rescued by a group from Georgetown, including Neil McShane (B'50), Richard Kelley (B'50), Tom McHugh (B'50), and William Blatty (C'50, later of Exorcist fame). During the course of the rescue, they also managed to capture the new Fordham mascot, which was a ram whose horns had been clipped. According to the Washington Times-Herald, our intrepid quartet stopped at a veterinarian's office to confirm that the animal was in fact a ram. So much for a liberal education. Another clipping shows Butch greeting the Villanova mascot, then in the care of Blatty, Kelley, and Charles Bidwill (C'50), now President of Sportsman's Park Racetrack in Chicago. 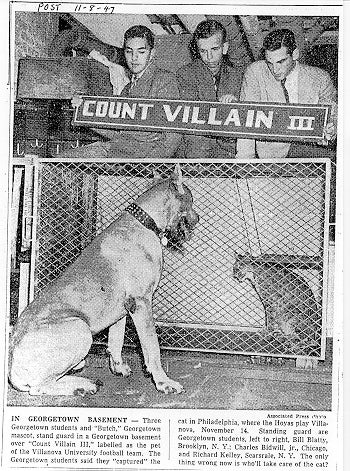 After Butch's retirement, the mascot's title returned to the breed Boston bull terrier, though this time in the guise of a person in a dog costume. We do not know this mascot's name; in fact, the only evidence of his existence is two photographs and a brief appearance in a game film from the middle fifties.

The final chapter of our story begins in 1962, when a student committee led by Stan Samorajczyk set out to restore the tradition of a live mascot. After reviewing the available documents, the group decided that a purebred English bulldog would best exemplify the tenacious qualities of our heroes of the hardwood. The committee was equally tenacious. Since the administration did not wish to commit funds to the project, the committee raised money through dances, an exhibition basketball game, sale of stock certificates, and door-to-door solicitation. Incidentally, the basketball game was the least profitable of these endeavors. In spite of financial difficulties unbecoming to a dog of his position, "Jack I" served faithfully for four eventful years. He too suffered the indignity of a villainous kidnapping, this time at the hands of ruffians from Holy Cross. Jack retired in 1967 and was replaced by Jack II, a younger and more vigorous bulldog. He in turn was replaced by a student (Pat Sheehan, C'81) in the now familiar bulldog suit. Pat was succeeded by Lloyd Williams, who expects to graduate next year. During last year's basketball campaign, Lloyd was joined by "Rocky", a prize-winning bulldog owned by Michael Meyers ( D'58). Rocky (also a nom de sport) is expected to return for the upcoming season.

Unfortunately, space does not permit us to chronicle all the dogs of Georgetown. Before closing, however, we must salute "Duchess," who chose to make her home on the East Campus in the fifties; several generations of Observatory mascots, including "Max," who was banished for killing sheep on the Archbold estate; and the labrador who in the middle seventies taught most of the student body to play catch. Some of us thought he deserved a degree. Anyone with additional memoirs is invited to submit them to the University Archives.