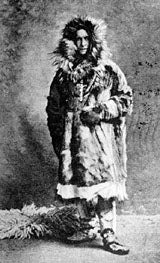 Rev. Francis Barnum, S.J., (1849 -1921) was, at various times, a world traveler, Alaska missionary, student of Inuit linguistics, and the first to attempt to manage the Georgetown University Archives. Though we had a place called the archives as early as 1816, Barnum appears to be the first to systematically collect and arrange historical material in the archives; this he did in a strikingly modern manner, though his work was often interrupted by postings to other Jesuit communities. A man of rare wit and good humor, it was said that he was sometimes reassigned with the express purpose of cheering up the other community. Thus for the benefit of anyone suffering from mid-winter cabin fever, or a surfeit of term papers, we hope that a small dose of Barnum on the perils of research might bring a welcome smile.

Difficulty of the Native Language

On arriving in Alaska, the first thing the missionary has to do, is to learn the language of the district in which he is stationed. It is hard for those who are accustomed to the aid of grammars and dictionaries, to realize what trouble it is to acquire a strange idiom without any help. One would scarcely believe what an amount of patient investigation is necessary to obtain the various expressions, so as to feel sure of their exact meaning. Let us take an example. Suppose we are in a boat, you pick up an oar, point to it and say, "Cha" =what? The native whom you address, gazes placidly at you, and says; "Chuya-ugeeakoa," which means, " I would like some tobacco." You proceed to write in your note-book, Oar = Chuya-ugeeakoa; you feel that you have a start, and so you endeavor to obtain the verb. Therefore you row a few strokes, and then you "cha" again. Probably by this time, he is sulky at not receiving the desired chew, or he is somewhat suspicious over that mysterious proceeding of yours with the pencil, so he pays no further attention to you. If he is a very intelligent fellow, he will say "Thou hast been rowing." Splendid! down it goes in the note-book. You notice that there is no similarity between the two words; well, after all, there is none in English either. Next you point to one who is rowing near you and "cha." The answer comes, and it is in the dual, but down it goes as your "third singular." Now you brace for a mighty effort, the hardest of all, to obtain the first person singular. "How do you say, I row?" is what you express as clearly as you can. Thou rowest is the invariable replay. Or he may suppose you wish a friendly criticism on your stroke, and with native simplicity says, "Thou rowest very poorly." For the 1st plural you designate yourself and others, and the reply is, "Ye row." When you get to the third plural and point to all rowing, you promptly get the word, "We are tired of rowing." They wish to rest and to have something to eat. When you have made out your paradigm at the mission, it will run, in English, somewhat as follows:

After this come the verification, which is far more difficult and slow. You soon find out by continual research and comparison, that there is evidently something wrong about that word for oar. Then you notice that on using the first person singular of your verb, that the person addressed appears neither interested nor flattered, so it must be wrong too, and thus the whole tense is laboriously reconstructed.