On November 18, 1976, world-renowned French marine explorer Jacques Cousteau sent a letter to U.S. Representative William H. Natcher, a Democrat from Kentucky and a longtime member of Congress. Enclosed with the letter was a copy of a telegram that Cousteau had sent to President-elect Jimmy Carter earlier that month. The telegram urged Carter to focus on the energy crisis facing the world. This letter and telegram are preserved in box 1 folder 40 of the William H. Natcher Papers.

Jacques-Yves Cousteau (1910-1997) was a French ocean explorer and environmentalist. He graduated from the French naval academy in 1933, and served as a gunnery officer in France in World War II. Passionate about undersea exploration, Cousteau developed new technologies to facilitate underwater research. He participated in the invention of the Aqua-Lung scuba system, sophisticated underwater cameras, and even a small submarine. In 1974, he established the Cousteau Society to promote the preservation of the world’s oceans.

Jimmy Carter (b. 1924) served as the 39th president of the United States. During his administration, America’s economy languished. Carter inherited an energy crisis whose origins traced back to the early 1970s, caused in part by an overreliance on foreign oil. Carter advanced an energy agenda that included taxation of oil companies, decontrol of natural gas prices, and use of synthetic fuels. His plans were essentially blocked by Congress. Nonetheless, Carter signed legislation to clean up toxic waste dumps, mitigate surface mining damage, and preserve land in Alaska from development. The federal Department of Energy was created during his term.

William H. Natcher (d. 1994), longtime Democratic member of the U.S. House of Representatives from Kentucky, was born in Bowling Green. He received a law degree from Ohio State University in 1933. He won election to the House 20 times. He set an astounding record by placing 18,401 consecutive votes over his years in Congress. In 1992, Natcher became chair of the House Appropriations Committee. 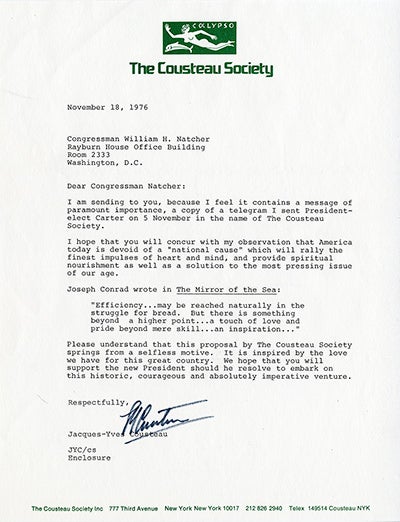 Cousteau’s letter to Congressman Natcher was written on Cousteau Society letterhead, and sent from the Cousteau Society’s headquarters in New York City to Natcher in the Rayburn House Office Building in Washington, D.C. Of the enclosed telegram Cousteau wrote, “I feel it contains a message of paramount importance.” He proposed that environmental protection could be America’s new “national cause” and wrote, “We hope that you will support the new President should he resolve to embark on this historic, courageous and absolutely imperative venture.” 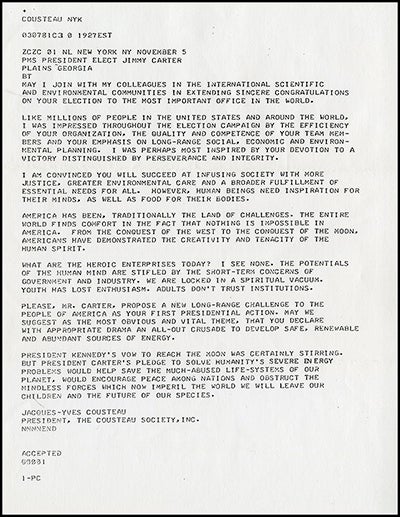 Cousteau sent the telegram to Carter’s home in Plains, Georgia on November 5, 1976. On behalf of “the international scientific and environmental communities,” Cousteau congratulated Carter on his victory in the presidential election. He optimistically thought Carter could promote “greater environmental care” for the planet. Cousteau suggested that America “declare with appropriate drama an all-out crusade to develop safe, renewable and abundant sources of energy” and concluded the telegram by writing:

President Carter’s pledge to solve humanity’s severe energy problems would help save the much-abused life-systems of our planet, would encourage peace among nations and obstruct the mindless forces which now imperil the world we will leave our children and the future of our species.

The letter and telegram testify to Cousteau’s and Carter’s commitment to environmental issues. Throughout his lifetime, Cousteau advanced oceanographic research. For his part, President Carter has spent years well beyond his presidency promoting environmental projects and peacemaking efforts worldwide. Cousteau’s correspondence resonates in our own time as we continue to face major environmental and energy challenges.