For a comparatively small private school, Georgetown alumni have long engaged in a surprising diversity of activities. In military affairs, no less than politics and business, our alumni have compiled a remarkable record, and have turned up in the front lines in all our nation's struggles. Our second student, Charles Philemon Wederstrandt, joined the Navy, and served aboard the U.S.S. Constellation before resigning because of poor health. Though no longer on active duty, he led troops in the successful defense of Baltimore against the British in 1814.

U.S. Army Lieut. William Walker, of Mississippi and the class of 1841, was first to scale the fortifications at the Battle of Chapultepec in the Mexican War, and later lost an arm and a leg in the service of the Confederacy; nevertheless, at the end of the war he was still on active duty, serving as a Brigadier General in command of the Department of North Carolina. General Lewis Armistead, C.S.A., who attended preparatory classes in 1830-31 before entering West Point, was mortally wounded at the side of a union gun at the furthest advance of Pickett's charge at Gettysburg, the so-called high-water mark of the Confederacy. Francis Preston Blair, of the class of 1836, rose to the rank of Major General in the Union forces and commanded the XV and XVII Corps in Sherman's march to the sea.

In this century, Dennis P. Dowd, Jr. C '08 enlisted in the French Foreign Legion and is thought to have been the first American to join the Allied forces in World War I. He was killed flying with the famous Lafayette Escadrille long before the United States entered the war. George A. Wolf, BSBA 1939, was lost aboard the U.S.S. Arizona in the attack on Pearl Harbor, the first of 125 Georgetown men to lose their lives in the Second World War. 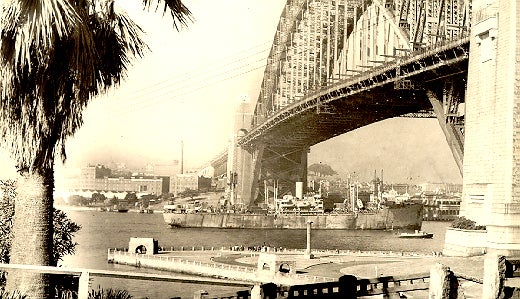 A curious footnote to this history is provided by the S.S. Georgetown Victory, which was among the last casualties of the Second World War. The 7000 ton Victory-class troopship was the 53rd in her class built at the Bethlehem-Fairfield shipyard at Baltimore, and launched April 28th, 1945. The Victory-class ships were an improvement on the famous Liberty ship design, providing greater tonnage, speed and comfort. After the war, many were converted to other purposes. For example, the Seton Hall Victory was converted for service as a radar ship during the Apollo program; the Notre Dame Victory became a Great Lakes bulk carrier; and the Vasser Victory became the Spanish liner Begoña. A few Victory ships were used by the military as late as the Viet-Nam conflict. Entering service near the end of the war, the Georgetown Victory and others like her, were given the happy task of transporting the troops for demobilization. Even so, the photo we have showing the ship leaving Sydney harbor for Glasgow, just a year after her launching, shows a battered and war-weary vessel; nonetheless, she must have seemed beautiful to the 1400 boys aboard, who were on their way home. Alas, she didn't complete the final voyage. On April 30, 1946, she ran aground off Killard Point, County Down, Ireland. All 1400 men were rescued by life boats and breeches buoy. The Illustrated London News noted that the ship was so close to land, that a number of men waded ashore through heavy oil and were cared for in nearby homes. The newspapers blamed heavy fog, but an authoritative history of the Victory ships says she was running at full speed on a fine clear evening. Undoubtedly, everyone aboard was anxious to reach port. In any case, by daybreak the next day, the vessel had broken her back on the ledge, and deteriorating weather conditions made her breakup seem imminent. Later, all remaining portable gear not already taken by looters was removed and the ship abandoned. Winter storms later separated the wreck into two parts. These sections were finally salvaged in 1951 and consigned to the ship-breakers at Troon. 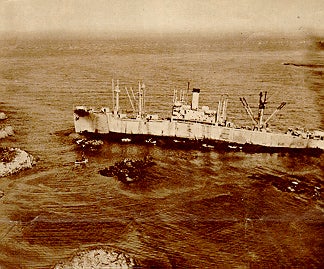 University Archivist Jon Reynolds's earliest career objective was to write non-fiction that was both interesting and informative. We hope this column represents a return to these original purposes.

The rest of the story:

In late February, 1999, we were delighted to receive the following email:

My name is Eddie Wright and I am from Swindon, England. My family have recently gone onto the Internet at home and I was browsing recently when I decided to look for information on the SS Georgetown Victory and was delighted to find your article. I was onboard the Georgetown Victory for her unfortunate last voyage and have pondered many times in past years what caused the grounding and eventual salvage of the ship

I served in the Fleet Air Arm and was in Sydney aboard the aircraft carrier HMS Perseus from December '45 carrying out 'ditching' operations of American 'Lease Lend' aircraft in the Pacific, many were new and unused! In March '46 many of us, as younger men were exchanged for Naval personnel in barracks who were due for demobbing before us. I was drafted to SS Georgetown Victory on 26th March '46 - leaving Sydney we headed for the UK calling in for water and fuel at Freemantle, Colombo and Aden via the Suez Canal.

On the night of the grounding events were something like this… by about 11.00pm on the 29th April, most of the navy personnel had kitbags packed and ready for disembarking at Glasgow the next morning. Most of us were settling down for sleep by that time - then there came a terrific crash and the ship stopped dead. All the main lights went out (emergency limited lights came on) and water was pouring through the air vents making us think we were going down. Kitbags and other loose baggage flew everywhere. There was of course a rush from all decks to get to the Upper deck, I can't remember now if if there were any loud speaker announcements or commands given.

On the upper deck we could see in the dimness that we had grounded and were right under the cliffs. Engines were put astern but failed to move us. No one left the ship at this time and we became aware after a hour or so that the tide was ebbing and we were going to be left almost high and dry.

With the sea level falling during the early hours of the morning the ship moaned and groaned as she started to break up. Water and steam pipes would suddenly burst and those who has settled back down on the lower decks would come rushing back up top.

Rescue started at about 5.00am, men were leaving the ship via scramble nets down into several small boats which took us the 50 metres or so to the rocky shore. We then headed up the cliff path where Irish farmers waited at the top to transport us to RAF coaches. We were taken to the local airfield for breakfast.

Later an Army convoy took us to Belfast Army barracks and at midnight on 30th April several hundred off us boarded an ordinary passenger steamer to Glasgow, our original destination.

From there we had 7 days survivor leave (normal RN practise) then I was demobbed back to civilian life after 3 years service.

I can confirm that the sea at the time of the grounding was flat calm and there was no mist!

Oh, by the way I expect by now that you may well be aware that in the photo of the SS Georgetown Victory under Sydney bridge, the ship is in fact entering the inner harbour and docks not leaving. The photo is taken from the North Shore looking across the harbour towards the city, the Opera House would be to the left of the picture on the city side. I was there again in December 1995 with my wife... what a beautiful city!!

Anyway, I hope my story hasn't been too boring, but may be of some interest to you. (My daughter has kindly typed this for me as I would have been here for weeks!) 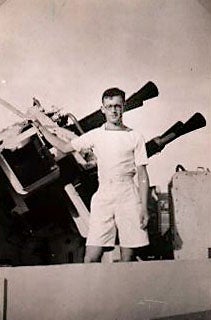 1. Yours truly, Eddie aboard HMS Perseus. 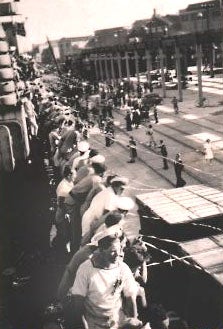 2. Dockside in Sydney, minutes before departure for the UK. 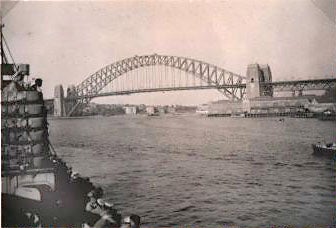 3. Passing under the Sydney Harbour Bridge for the last time. 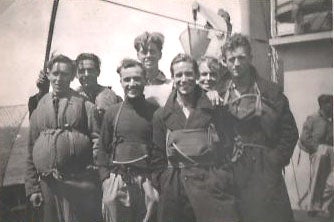 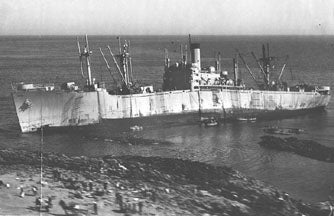 The newspaper cutting attached would seem to indicate that most of our belongings were lost, I don't think this was so. An official Naval salvage party was organised during the day. As an Air Mechanic (Air Frames) I personally only lost a good kit of tools which were due to be mine on demobilisation. I did make sure that presents from Australia such as silk stockings for my fiancee (who died in 1972 after nearly 25 years of marriage)and other items for my family left the ship with me down the scramble nets. These were contained in a fairly large suitcase which was rope lashed to my back. I wondered at the time If I would fall off the nets with the weight, but all was well. Oh! I must make this comment about the lifeboat drill photo, it probably cannot be seen that I and many others aboard hadn't shaved for days. The reason being that Georgetown Victory only carried freshwater for drinking and catering, other supplies were taken from the sea for personal washing etc. We were issued with salt water soap… try it some time!! You will know why shaving was an agonising chore!!! I hope the photos attached are OK for quality, in terms of their possible use. I think I have told you everything that may be of interest to you now. I look forward to hearing from you in future days.

Needless to say, these letters and photos really made our day here in Special Collections. We are most grateful to Mr. Wright for sharing them with us.

Mr. Wright died in 2004. His widow, Mrs. Sheila Kingdon (formerly Wright), would be happy to hear from others interested in the Georgetown Victory at: sheila_kingdon@btinternet.com.