They Came to Georgetown: The Irish (Part I)

Fr. James Ryder, born in Dublin in 1800, came to the United States as a child following the early death of his Protestant father. Enrolled at Georgetown by his mother in 1813, he entered the novitiate of the Society two years later. Not long after, he was among a group of talented young American scholastics sent to Rome for training. 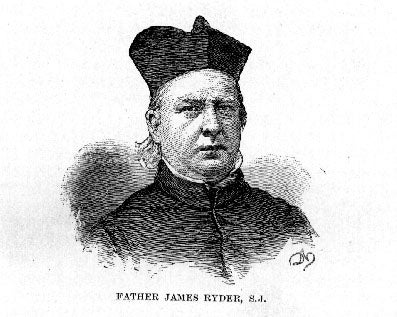 Rev. James Ryder, S.J. Fr. Ryder returned to Georgetown at the end of 1829. By the next year he had left a continuing mark on the college by directing the formation of the Philodemic Society. Esteemed throughout his life as an eloquent preacher, he continually encouraged oratory and debate at the college. During his first term as president, in 1842, the Philodemic took upon itself, under his leadership and that of Fr. George Fenwick, to slake the public thirst for a celebration of the anniversary of the founding of Maryland. In due course clergy, students, musicians and distinguished guests took conveyance to St. Inigoes and St. Mary's, where they regaled themselves on oratory and a concluding ode by George Washington Parke Custis, set to the tune of " The Star- Spangled Banner" and sung by a trio composed of Custis, Fr. Fenwick, and a granddaughter of Charles Carroll of Carrollton.

Two years later Fr. Ryder saw to the passage of the act incorporating " The Presidents and Directors of Georgetown College." Besides entitling the college to adopt a seal, the act clarified the ambiguous position given the college by the original 1815 charter. And in a decade of intense anti-Catholic feeling throughout America, Fr. Ryder made sure that the college was known at 1600 Pennsylvania Avenue-even though twice he was pelted with rocks in the streets of Washington. Besides accepting Presidential offspring as students, the college, at Ryder's insistence, put regional differences aside and turned out en masse for inaugural parades and other occasions. Ryder provided an extra touch by sending gifts of fruit from the vineyards on the Observatory hillside to the President.

The Observatory itself came to be built in 1843, though credit for it cannot fairly be given to Fr. Ryder. But in his second term as president, from 1848 to 1851, he oversaw the foundation of the Medical Department. Impetus for the establishment of the medical branch came from four doctors disaffected with the policies and educational practices of the medical school attached to Columbian College (George Washington University), which had started up in 1826. Doctors Noble Young, Johnson Eliot, Charles Liebermann, and Flodoardo Howard, after a preliminary meeting on Oct. 25, 1849, met again with Fr. Ryder and won his agreement to the affiliation of a school to be run by them with the college. Procurement of a site and final arrangements for a faculty took time, but a prospectus dated April 2, 1851, announced the schedule for an initial course of lectures which began in the following month. Simply by not erecting obstacles, Fr. Ryder accomplished what otherwise would have strained to the breaking point the resources of the college.

Referred to once by Bishop Benedict Fenwick as a "right down nice little fellow," Fr. Ryder emerged with reputation unscathed from the student revolt of 1850. While he was away from the campus, on Jan. 15, three students got into trouble. The following day Fr. James Ward, Fr. Ryder's deputy, expelled them. One stayed on until dinner, at which time he roused a number of his fellows to sympathetic anger with a speech in the refectory. Some violence followed, and 44 young gentlemen betook themselves to the Globe Hotel in Washington, from whence they issued non-negotiable demands, principally for the restoration of the status quo ante of Jan. 14 and a general amnesty for themselves. But in vain: notice was given to the hotel that the students' bills would not be paid by the college, and a team of Jesuit negotiators talked the students into submission, demands unmet, on Jan. 21. 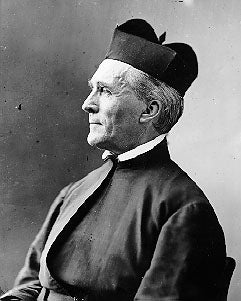 Fr. Bernard Maguire was not the sort of president who would make himself "unavailable for comment." Shortly after he became president in 1852, a band of students disrupted a class and did some mild wrecking. Fr. Maguire faced them down alone, expelled six, and finished with the affections and respect of the student body securely in his grasp. A native of Edgeworthtown, County Longford, Fr. Maguire came to the United States shortly after his birth in 1818.

As prefect and as president, Fr. Maguire commanded the respect of the students and got it. No one-probably not even a bishop-would have dared call him a "right down nice little fellow." His readings of the monthly "black lists" are recalled in the reminiscences of Fr. Francis Barnum, a student at Georgetown during Fr. Maguire's second term as president, from 1866 to 1870: ... we all knew perfectly well the storm that was coming and wondered who were the ones that the bolt would fall upon. There was first a nervous crumpling of the paper and then the torrent burst forth. Even Fr. Barnum, loquacious and a man of considerable wit, was awed: "It is useless to attempt a description."

The college was blessed during Fr. Maguire's first term with a level of prosperity never before reached and not to be reached again until long after his second term. The middle 1850's saw the flowering of the college societies and the institution of college dramatics. Among its more important events was the more rigid separation of college and preparatory divisions. What is now the Maguire building was erected during Fr. Maguire's presidency to house the younger boys. In 1853, shortly after the opening of Loyola College in Baltimore, the Provincial of the Maryland Province of the Society moved his official residence from Georgetown, where it had been since the organization of the province in 1833, to Baltimore.

Another separation from the Society marked Fr. Maguire's second term. The Civil War and the attendant burgeoning of Washington's population provided the final arguments for those in the Society who wished to have the scholastics studying in an atmosphere of quiet and retirement. Washington would suit no longer in those terms (if it ever really had), and so the scholastics and their teachers and a large percentage of the college library went off to Woodstock, near-but not too near-Baltimore.

The man who was head of the college between Fr. Maguire's two terms and again after the second term was Fr. John Early, a native of Maguire's Bridge, County Fermanagh. Unlike Frs. Ryder and Maguire, Fr. Early grew up and was educated in Ireland; he came to the United States at 19, in 1833, and the following year entered the Society of Jesus. 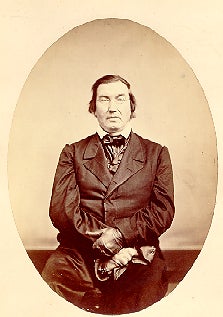 Rev. John Early, S.J. Fr. Early was a "professional" college president. From 1848 to 1851 he was president of Holy Cross; in 1852 he was the first president appointed to the newly-founded Loyola College in Baltimore. Leaving Loyola to take over Georgetown in 1858, he returned there during Fr. Maguire's second term here, 1866 to 1870, only to return to Georgetown in 1870 himself.

Fr. Early's first term at Georgetown was dominated by the Civil War. As is well known, Union troops (the 69th and later the 79th New York regiments) were billeted briefly at Georgetown early in the war, and the college was used as a base hospital after Second Manassas, from August 1862, until January, 1863. But it was the drastic decrease in student enrollment that was the most serious problem. The Southern boys who had made up the majority of Georgetown's students went back to fight for their states or to be educated away from the North. Much of the Northern minority decamped as well for similar reasons, and more than once there were less than 60 students in the whole college. Fr. Early kept the college open, however, and in the fall of 1865 he was able to assemble over 100 students, including a group of seven from Louisiana, the first Southerners to enter since before the war.

The war did, however, stall for ten years a project that was important to Fr. Early and to the college. As early as June, 1859, plans for a proposed law school were underway. A letter to Fr. Early from William M. Merrick, dated June 9, refers to the proposal as "your scheme" and reports favorable outside reaction to it. Not until 1870, however, was the Law Department a reality, when Fr. Maguire was able to announce its formation in his address at the 1870 Commencement. The Law School opened during the following October, after Fr. Early had returned to Georgetown, in rented quarters in the Colonization Building at Pennsylvania Avenue and 4 1/2 Street.

The question of whether the college was to mature into a university was put off for a few years following Fr. Early's death (while still in office as president) in 1873. But during the period in office of its three Irish presidents-1840-45, 1848-51, 1852--73 -the college obviously moved far along that road: the scholastics were gone, but the younger students were isolated officially and schools of medicine and law were established. A conscious decision not to pursue the aims of a university would have been to ignore the efforts of almost 30 years. To Fr. Patrick Healy has generally gone the credit for much of Georgetown's academic improvement in the late nineteenth century; but to the three Irishmen, Ryder, Maguire, and Early, Fr. Healy owed the stable administrative and educational structure upon which he could build.