The Unknown Women of Georgetown

In 1789, the separate education of men and women, and indeed the idea that women needed but few educational opportunities, was taken for granted. John Carroll thus did not need to specify that his academy was for the education of young men, and in modern times, the admission of women on the basis of full equality was considered a thoroughly revolutionary development. A group of golden jubilarians once told me that Fr. McDonough, our long-time Prefect of Discipline, simply didn't believe women had any place around the college, and so tried his best to make sure that his young men never encountered them. For their part, this group assured me they made it their mission to meet as many young women as possible. So much for the schemes of Jesuits. There were women on the campus even then, and there were in fact women involved with Georgetown from the very beginning. These sketches provide an introduction to this all but unknown story. 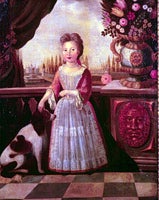 Eleanor Darnall Carroll, the mother of John Carroll, our founder, was one of the few women in colonial America to be given a formal education. For the Maryland Catholics, this meant convent schools in Flanders. Her influence clearly was vital throughout son John's entire life. Indeed, had she not lived well into her eighties at Forest Glen, now a subway stop on the Red Line, Carroll would not have returned to Maryland, and thus would not have had the occasion to establish our University. Nor would he have had the occasion to encourage Mother Seton to begin her educational work at Emmitsburg, or to approve the school at the Visitation convent in Georgetown. In the very first decade of our existence, Georgetown employed both lay men and lay women, but all we know about them is found in the payment schedules in the ledger books. Justane Douat was a woman of means who came here from Santo Domingo to serve as a nurse for the students. From her accounts we know that she attended the theater with then University President Fr. DuBourg and Bishop Flaget of Kentucky, and employed her own servants. That is about all we know about her, though there is one interesting unexplained line in her account: "to cash paid for the seal of the corporation." From this entry it appears she was donating the money to engrave the emblem that is now the seal of the university, but the accounting practices of the time were sufficiently irregular, that we can't really say for sure.

Susan Decatur, the widow of naval hero Stephen Decatur, lived in a cottage where the White-Gravenor building now stands. In addition to a number of mementos left to the university collection, Mrs. Decatur made several significant cash grants to the university in return for a life annuity. She then lived long enough to be one of the few people to actually make a decent living out of the university.

There were many other women whose hard work and support did much to build this place, from the women who ran the laundry that stood near the present site of Harbin, to the women whose donations built Dahlgren chapel, the two Ryan buildings, and much of the east campus. Also, we should remember that the Visitation Academy girls made the banner that marked the adoption of Blue and Gray as the official school colors, but still, they were not admitted as students. The Jesuits held the line.

Until recently, it was thought that the first women officially enrolled at Georgetown were the students of the nursing school, but a research request caused us to discover two women enrolled in the Medical School in the 1880-81 school year. Jeannette Sumner and Annie Rice transferred to the Women's Medical College of Philadelphia after that year, completed their medical education and established the first dispensary in Washington serving the needs of poor women and children; yet we have no idea how they came to be admitted or why they transferred. Still, they were definitely the first women to be enrolled at Georgetown.

Women have officially studied at Georgetown continuously since the founding of the Nursing school in 1904. In 1919, special arrangements were made to offer classes at Georgetown Visitation for nuns wishing to improve their education. During the 1930's women were admitted to the Hygienist program at the Dental School, and were admitted to regular graduate programs during the second world war. By 1952, women were admitted to all schools but the college, though on a very limited basis. By that time, there were 409 women on campus out of a total enrollment of just over 5000. The women of Georgetown have always been a very talented group. For example, the late Rita Lenihan, who was in the first group of women admitted to the graduate school, later commanded the women's naval forces; Mary Jo Bane, SFS '63, the first woman editor of the Foreign Service School Courier, is on leave from a Harvard Professorship to serve as Assistant Secretary for Children and Families in the Department of Health and Human Services; and Christine Niedermeier, C'73, L'77, the first woman to deliver the Cohongurotan oration, is running for Mayor (actually, the Connecticut title is "First Selectman") of Fairfield, Connecticut.

The first tentative recognition of the need for women's extracurricular activities came in 1952 with the establishment of the women's athletic association. Initially, the association was limited to nursing students, and the main activity was intramural basketball. Later field hockey, swimming, tennis, badminton, bowling and horseback riding were added, and local intercollegiate competition began in basketball and field hockey. In 1956, nurses Skippy White and Carol Bloise won spots on the men's sailing team and were the first Georgetown women to win varsity letters. Soon women were leaders in all aspects of student activities, and it remained only to breach the hallowed walls of the college. This was accomplished with only minor discomfiture in 1969. By 1976, Georgetown was more than 50% female, with 2642 women undergraduates enrolled. Though we may assume the battle of the sexes will remain a feature of human nature, and the full meaning of equality has yet to be realized, happily, equal educational opportunity is no longer a subject for debate at Georgetown.