The Art of Prentiss Taylor: A Retrospective Exhibition of his Lithographs with a Sampling of his Oils, Watercolors & Book Jacket Designs

Prentiss Taylor’s inspiration has always been drawn from the interests and concerns of cultivated man—especially architecture, music, and social justice—and from man’s relationship to environment and landscape. His subjects range from the grand to the common. While human figures seldom appear in his landscapes, the interaction of man and landscape is implicit, and vestiges of man’s past are usually present—a Roman aqueduct, an Indian cliff dwelling, a church at Trampas.

Although his work has always been figurative and seemingly realistic, Taylor does not hesitate to alter or rearrange reality for its own good and for the enhancement of his design. His earlier work often employed deliberate distortion in order to achieve a synthesis of the various elements of a scene, controlled primarily by an overall design concept, a kind of arrangement and summary of a scene by collection and formally organizing its separate elements.

In the course of time, he refined these distortional techniques considerably, especially in his landscapes. Instead of arbitrarily combining selected elements of a scene into a formal conceptual arrangement, he developed an approach of changing focus or viewpoint.

As Taylor himself explained it on the occasion of an exhibit in 1951, “I have walked around the landscape you are looking at…I have looked at the buildings close to and then seen them in the entire landscape This is simple This is what everyone’s eye does. The eye does not comprehend a whole scene. It roves. And it is this shifting viewpoint that I exploit to emphasize the elements of a scene that will express my conception of it. Consequently, the scene is at once more naturally represented than by the synthesis method and yet not restricted to the camera-eye or fixed viewpoint.”

It is the artist’s lithographs that summon forth and display his greatest skills. Practically in a class by themselves are his prints drawn on stone with brush and lithographic ink instead of crayon. Sometimes called “lithoprints,” they permit great spontaneity of creation, but demand the utmost virtuosity and experience. Once the ink is diluted in order to obtain halftones and other tonal gradations of a wash drawing, it becomes extremely difficult to handle with confidence in the outcome. There are a number of outstanding lithoprints in this show.

Characteristic of Taylor’s work is careful and thoughtful composition, including clarity of design, rhythm, space, and tonal values. He is concerned not just with balance, but, above all, with movement, the use of design elements to carry the eye across and around the work.

Prentiss Taylor explores and exploits all the textural possibilities of the lithographic stone with assurance, virtuosity, and authority, distilling the experiences of a man of great sensitivity, broad interests, and discriminating taste, who is concerned above all with man’s place in nature and time.

In 1927 the Arts Club of Washington hosted the first exhibition to include the works of Prentiss Taylor, a third generation Washingtonian born December 13th, 1907. In announcing the exhibition, the Club declared that this remarkable young artist had “a brilliant future ahead of him.” Now, more than sixty years later, we witness the complete fulfillment of that judgment in this Georgetown exhibition.

Taylor began the study of lithography at New York’s Art Students League in 1931, finding that the medium gave him great satisfaction. As he was to comment on it many years later, “with that first magic feeling of the lithograph crayon working on the fine grain of the stone, I knew that I was at home in lithography.”

In 1934, after fellowships at the MacDowell Colony and at Yaddo, the MacBeth Gallery gave Taylor his first one-person exhibition in New York City. In 1942 he became the President of the Society of Washington Printmakers (an office he was to hold for the next 34 years) and in 1948 he was elected an associate of the prestigious National Academy of Design.

One of Taylor’s most interesting projects was his collaboration with the late Langston Hughes, the noted black author. With the encouragement of the writer Carl Van Vechten, Hughes and Taylor joined forces towards the end of 1931 to create the Golden Stair Press, issuing broadsides and books with illustrations by Taylor and texts by Hughes. Among their joint publications are The Negro Mother and Other Dramatic Recitations and the powerful Scottsboro Limited.

The subject of art and psychiatry is one in which the artist has also been deeply interested. From 1943 to 1954 Taylor served as art therapist on the staff of St. Elizabeth’s Hospital in Washington, and later with the staff of Chestnut Lodge in Maryland. In addition, the February 1950 issue of the American Journal of Psychiatry carried his important contribution to the literature, “Art as Psychotherapy.”

Over the years Taylor has travelled much and exhibited widely, both in this country and abroad. His work has been shown at the Art Institute in Chicago, the Metropolitan Museum of Art, the Whitney, the Philadelphia Museum of Art, the Museum of Fine Arts in Boston, and at the Library of Congress, to name a few. As early as 1937 he was shown at the American Pavilion of the Paris Exposition, and again in 1940 at the Venice Biennial. In many of these exhibitions his works have won prizes and awards for their excellence. Today he is represented in the permanent collections of many of the country’s leading museums.

Prentiss Taylor lives in comfortable retirement in his Northwest Washington home amid his art and his books, reminiscing with old friends, former students and admirers who come by in search of the wisdom and advice of one of America’s outstanding graphic artists.

All works listed in the catalog are lithographs, except where the entry is preceded by an asterisk and goes on to identify the work as a watercolor, oil, drawing, etc. Unless otherwise noted, all works are from the collection of the artist. 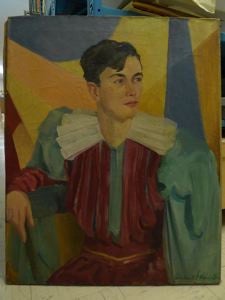 Prentiss Taylor – A Look Back

Myself as Mezzetin, 1936
Ed. 40, XLVI, 326 x 223
Self portrait with memorabilia, including a cross section of TVA’s Norris Dam
James Elder Collection, Georgetown Univ. 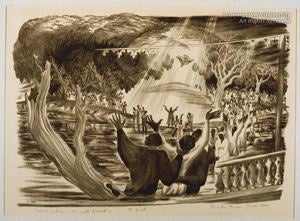 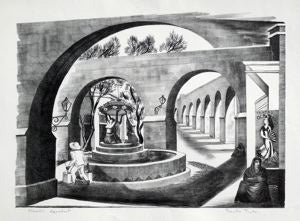 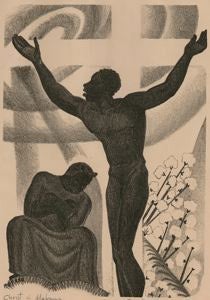 Co-sponsored by Georgetown University and The Washington Print Club