Cosmology 101: The Big Bang—Its Math and Aftermath in Fine Prints

This exhibition is about the science of cosmology, i.e., the study of the origins, structure, and development of the Universe as we approach the end of the 20th century.  This has been a century of major breakthroughs—beginning with Einstein’s theory of general relativity in 1915 followed by Edwin Hubble’s demonstration in 1924 that there are galaxies out there beyond the Milky Way, and again in 1929 that the Universe is still expanding.

It was in the early 1940s that George Gamow postulated his theory that the Universe began with a gigantic primaeval fireball. But lacking proof, he was soon forgotten in the face of the then widely held belief among cosmologists that the Universe was without beginning or end.

It wasn't until 1965 that two radio astronomers working on a project at Bell Laboratories chanced upon an all pervasive background noise of radiation in the heavens, the telltale missing evidence to prove beyond a doubt George Gamow's theory of the Big Bang. Today hardly a month goes by without some announcement of a new galactic discovery. The Washington Post carried a front page article in its April 22, 1998 paper headlined "Oh Baby! Telescopes Show the Birth of a Solar System," in which it covered a NASA announcement of the discovery of a disk of planet-forming debris surrounding star HR 4796 in the constellation Centaurus, some 220 light years or 1,300 trillion miles from earth.

The article goes on to state that "planets form as natural byproducts of star formation… coagulating inside flattened clouds of gas and debris that rotate around a newborn star…(with matter clumping)…together to form planetesimals 10 to 100 miles across which finally may collide and pile together into full-blown planets.”

It is thought that once formed, a great planet wields enough gravitational power to sweep up the gas and debris in nearby rings leaving an empty void to either side of it.

To enhance the viewer's understanding and enjoyment of Cosmology 101, the curator created a self-guided tour with checklist for each of the four "Big Bang" sections: its math, its aftermath, its theologies, and finally, the promise of its next millennium.

The Big Bang & Its Math

The mathematical equations developed to explain the astrophysicist’s understanding of the Big Bang would boggle the mind of all but professional cosmologists and their graduate students.  Suffice it to say, however, that at the bottom of it all is Einstein’s famous equation, E = MC2, i.e., energy = mass times the speed of light multiplied by itself.

What happened at the very moment of the Big Bang marking the beginning of time and space is still a mystery. But astrophysicists tell us that the temperature rose to more than 1032 degrees on their Kelvin scale (i.e. 1 with 32 zeros following it) in that pinpoint of nothingness from which our Universe of billions upon billions of galaxies began its process of expansion, a process still going on today, some 15 billion years later.

To help conceptualize what might have occurred just prior to, and at the very moment of the Big Bang, Cosmology 101 offers Richard J. Anuszkiewicz’s two untitled intaglio prints of 1979, the one in black listed in the checklist under “Countdown Minus One,” and the other in orange under “We Have Ignition.”

As to why it occurred, Cosmology 101 offers Trudi Ludwig’s handcolored linocut portrait of Einstein teaching his E = MC2 equation from her “New Icons for a 20th Century Cathedral” portfolio. Note the rays of energy and the stars emanating from “MASS” as it floats above Einstein and his equation. What triggered that exchange? The answer still lies hidden in the cosmic mysteries on which he expended so much energy, recognizing that

"The Most Beautiful Thing We Can Experience
is the Mysterious - It is the Source of
all True Art and Science."

The Big Bang & Its Aftermath

In the 1st print in this section, Hayter's "Expansion," we can visualize the Big Bang's expanding primordial mass as it began thinning out and cooling down on its way to evolving into today's Universe. In one of its galaxies, our Milky Way, our sun was born some 4.6 billion years ago when a gas cloud ignited with temperatures rising to some 10 million degrees on the Kelvin scale.

In the early stages of the sun’s development it began to attract dust and other galactic debris into encircling bands of matter such as we see in the 2nd print, Pearson’s “Gyros IV” of 1964.  With the increasing attraction of more and more material, these bands began to coalesce into larger and larger masses, ultimately giving form to the nine planets in our solar system.

With the passage of the eons our planet Earth became host to rudimentary forms of life, and ultimately in time to human life itself. In the 3rd print, Wendy Thon seems to suggest that her "Meteors" might have been the source, while in the 4th print Mina Billmyer assures the viewer that regardless of the source human kind thrived in her “Rite of Spring” under the moon and stars.

Humanity brought with it a whole new dimension to the Big Bang’s evolving Universe.  For now there were intelligent beings wandering over Earth's land masses, sailing its seas, studying its heavens, searching for meaning, recording their reflections, building their cities, and creating their art.

But humanity also had a destructive bent—going off to its wars, contaminating its environment, and even trashing its cities as Albert Decaris reminds us in the 5th print, his “La Seine Assechie” badly in need of an Earth Day sponsor.  Our government leaders even went so far as to build thickets of nuclear weaponry capable of pushing mankind to the brink of an annihilation of our own making as we are reminded in the 6th print, Jean Carzou’s “Apocalypse” of 1957.

But if humanity escaped that apocalypse, our biblical literature reminds us of yet another, though not of our making.  For somewhere there is an angel, trumpet in hand, ready to sound the alarm when Earth's appointed hour arrives, as Boris Artzybasheff clearly warns us in the 7th print, his powerful wood engraving of 1937, “The Last Trumpet.”

When might that come? If we ask the astrophysicists, they will tell us that it will surely come when our dying sun, having exhausted its nuclear fuel some nine billion years from now, falls prey along with its planets to the shredding and ingesting by one of our galaxy's recycling bins, a ravenous black hole. See the section's final two prints, June Wayne's "Goodbye Louise" of 1988, and “Black Hole Anyone?” by the anonymous collagist of 1998. 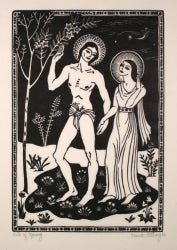 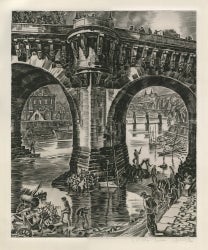 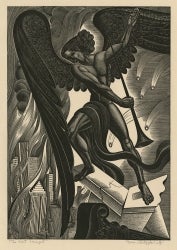 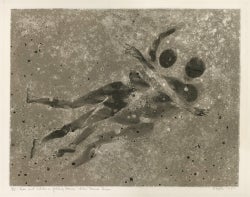 The Big Bang and Its Theologies

In the previous section, two of the prints dealt with the “Apocalypse,” one man-made, the other as foretold in Judeo-Christian biblical literature.  This section expands on the latter in a remarkable portfolio of eight prints published circa 1920 by the self-taught printmaker Fritz Schwimbeck, born in Munich in 1889.

The title of the portfolio is “Werden-Vergehen,” The Birth and Death of the World.  It begins with the Spark of Creation flowing from the hand of the Judeo-Christian God, followed by the planet Saturn as it flows free of the Unfolding Universe.  It continues on with the appearance of Siva, the Hindu deity of life and death, followed by Oblations offered in an Egyptian temple.  Then comes “Untergang” with its apocalypse engulfing the city of Cologne, its famous cathedral and its people. "Gedenkblatt" ("In Memoriam") follows with its lone grave marker standing askew under a darkened sky lit only by the fires burning in the background. The penultimate print shows the figure of all pervading death hovering in the blackened sky. The final print, "Ewigkeit" ("Eternity"), shows the majestic planet Jupiter with the lifeless Earth riding low beneath it in a cosmic captivity for ever more.

Obviously Schwimbeck's interest in "Werden-Vergehen" ran deep in its theologies and myths of late 19th and early 2oth century literature. Had he been born a generation later, what might these prints have been as Cosmology began to discover the Big Bang, its expanding Universe, its billions upon billions of galaxies, and its black holes? He probably would have taken to his etching plates and reveled in it. 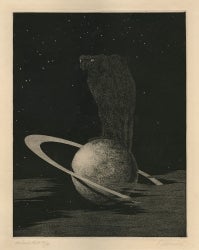 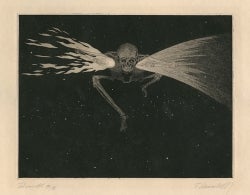 The Big Bang & Its Next Millennium

In the foreword we took note of the Washington Post’s April 22, 1998 report that NASA researchers had just discovered a disc of planet-forming debris surrounding the 10 million year old star, HR 4796, some 220 light years or 1300 trillion miles from Earth.  (A light year is the distance light travels in a vacuum in one year, or about 5.8 trillion miles.)  On May 2, 1998, the Post reported yet another discovery by astronomers in Hawaii of the most distant galaxy yet, some 12.3 million light years from Earth.

In this final section of Cosmology 101, we have chosen three prints to project the possible future direction of the science, two by Angelo Savelli, and the other by Irving Amen. This latter print is a portrait of Einstein who, before his death in 1955, had reminded his fellow scientists that "God does not play dice with the Universe."

The 1st of Savelli's prints, "The City Going Moon" of 1964 was chosen because it deals with the pathways a space craft would follow in climbing out of Earth's gravity and on into its parabolic course to begin exploring our solar system and beyond.

Savelli's 2nd print, "Listening to the Universe" of 1965, was chosen since it was his tribute to the work of two radio astronomers at Bell Laboratories who had just discovered Big Bang's radio waves still reverberating in outer space.