Famous and Familiar: Faces and Figures by Edward McCluney

We are honored to present an online exhibition devoted to the graphic work of the multi-talented artist Edward McCluney. Mr. McCluney is a natural draftsman and can often draw figures and faces from memory. His prints depict familiar types and people we might have encountered in everyday life. Some of them are infused with a wry twist of humor, others are poignant character studies. This exhibition explores some of the ways in which McCluney has brought innovative techniques to the field of traditional printmaking through experimentation and discovery.

Edward McCluney is a master printmaker and art educator who works and teaches at his studio in the Torpedo Factory Art Center in Alexandria, Virginia. He began teaching in 1962, and loves mentoring and working with students of all ages. He has exhibited in more than fifty group shows and more than thirty solo shows. McCluney's works have been featured in newspaper articles, on video, and in various publications. In addition, his work is represented in private collections, galleries, and museums.

McCluney holds a BFA in art education and fine arts from Norfolk State University and an MFA in printmaking and painting from the University of Massachusetts, Amherst. While he was in college he integrated the Virginia Beach Boardwalk Art Show along with his teacher and mentor A. B. Jackson, a painter, and won first prize in pottery.

After graduate school, McCluney began teaching at the Massachusetts College of Art where he taught in the Fine Arts and Art Education departments, attaining the rank of Associate Professor and exhibiting in regional galleries. Later, he served as Director of MIT’s Student Art Association for seventeen years. In 1973 he had a break-through exhibition at the National Center of Afro-American Artists in Boston, where a number of his works were added to the permanent collection. While a longstanding artist-in-residence at the NCAAA, McCluney created his chief masterwork, a portfolio of linocuts entitled Nine American Masters.

Our exhibition draws from sixty McCluney artworks in Georgetown University's collection, the majority of which were generously donated by the artist. Measurements provided represent the sheet size. Visitors are welcome to view the collection by appointment in Lauinger Library's Booth Family Center for Special Collections.

Nine American Masters is a portfolio of large linocut portraits, some accented with color, portraying a select group of iconic artists, writers and performers whom McCluney considered absolute masters of their disciplines. The suite began from a chance encounter with author James Baldwin on the streets of New York. During their interaction, McCluney made some quick sketches of Baldwin on a brown paper bag he was carrying. These were later developed into drawings which came to the attention of Barry Gaither, Director of the National Center of Afro-American Artists (NCAAA) in Boston. Gaither was so impressed, he suggested that McCluney create a series of great African Americans. The resulting portfolio may be considered the magnum opus of the artist’s career.

The Ford Foundation, the Museum of Fine Arts, Boston, and the NCAAA commissioned the Nine American Masters portfolio. When it was exhibited at Brandeis University in 1993, McCluney reflected in the exhibition catalogue:

"For their extraordinary creativity, imagination, innovative styles, technical skills, appreciation of self, tenacity and perhaps just plain genius, I have chosen these nine truly gifted people who have contributed to brightening the human condition. They are all black Americans, but their accomplishments are not limited to any ethnic or cultural group. Their contributions command praise worldwide, and they truly belong to the international creative history of our time."¹

As a tribute to the guiding figure behind the project, McCluney added a tenth portrait of Barry Gaither. For the purposes of this online exhibition we’ve included a selection of portraits from the suite. 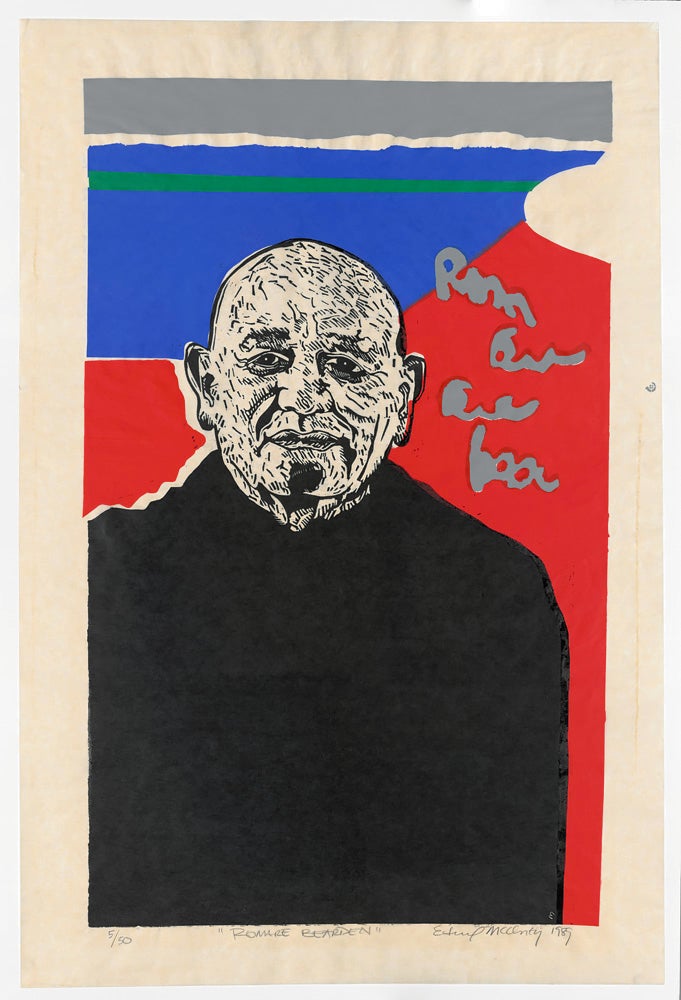 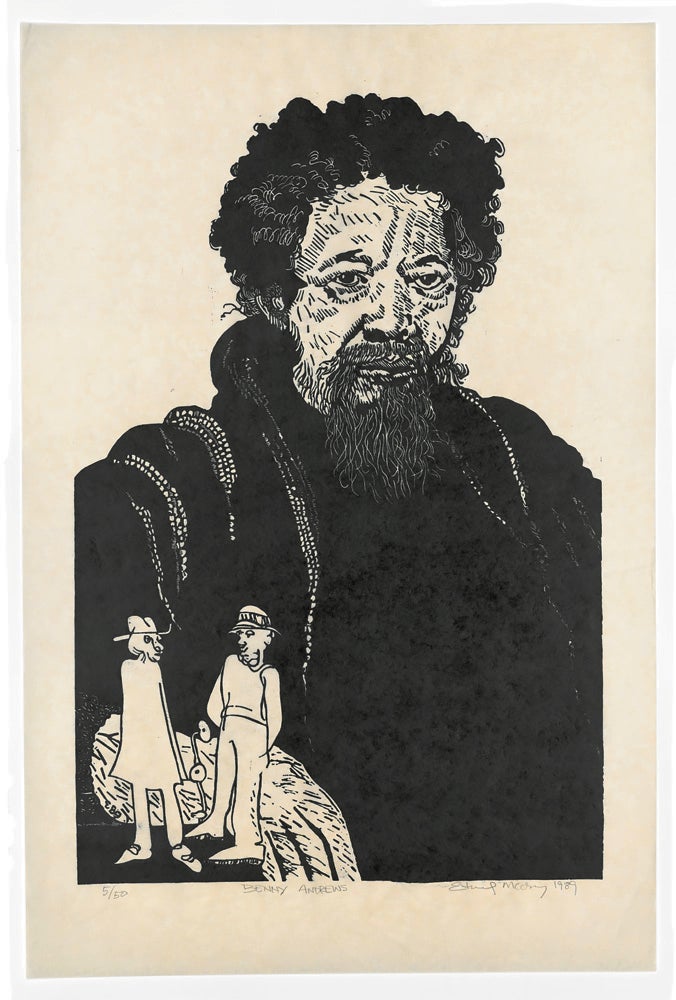 "I did several sketches of Benny, and he and I traded five of my Masters portraits for several of his pieces."1

1. Quotes here and in the Famous sub-section below refer to an email from Edward McCluney to Art Curator LuLen Walker on 24 July 2017. 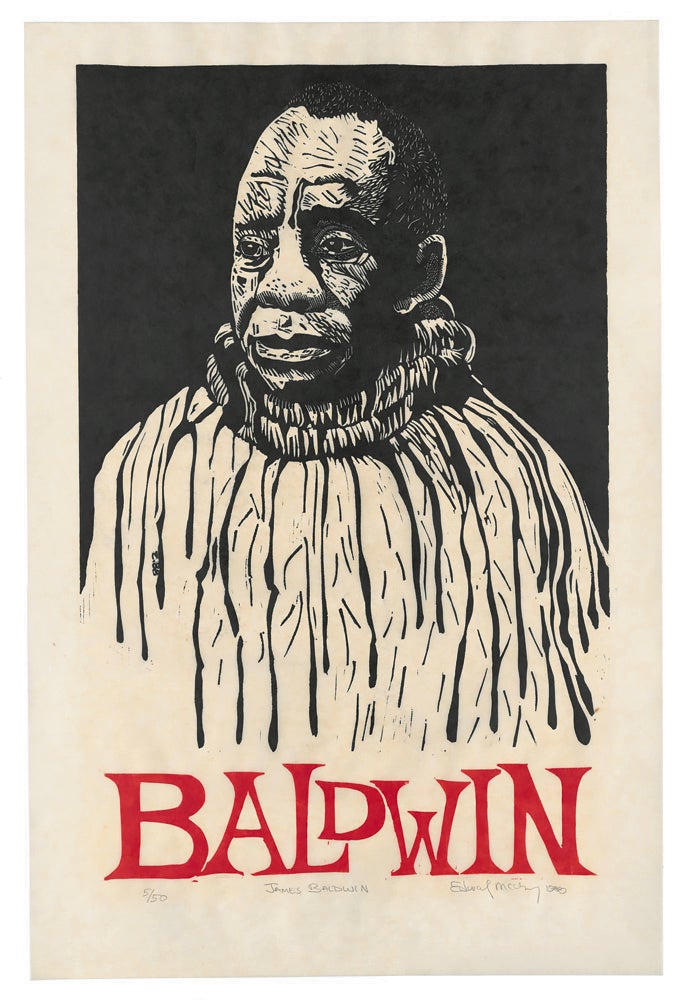 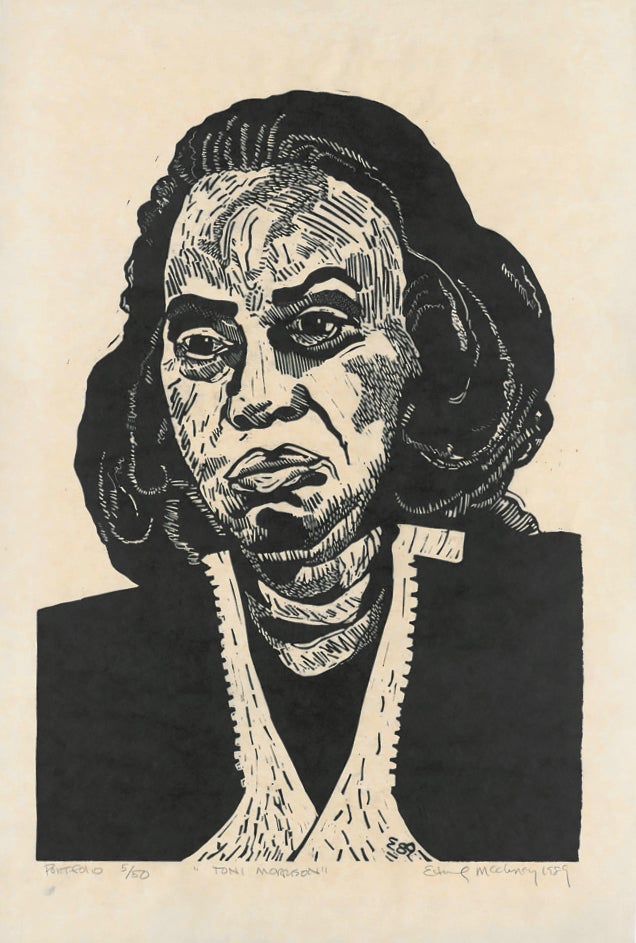 "In the mid-‘90s, Toni Morrison came to MIT where I was a campus photographer. I followed her around for a couple of hours and told her that I wanted to put her in my Masters portfolio. She said fine, but she would not pose. I photographed and sketched her and sent her a final print when her image was done." 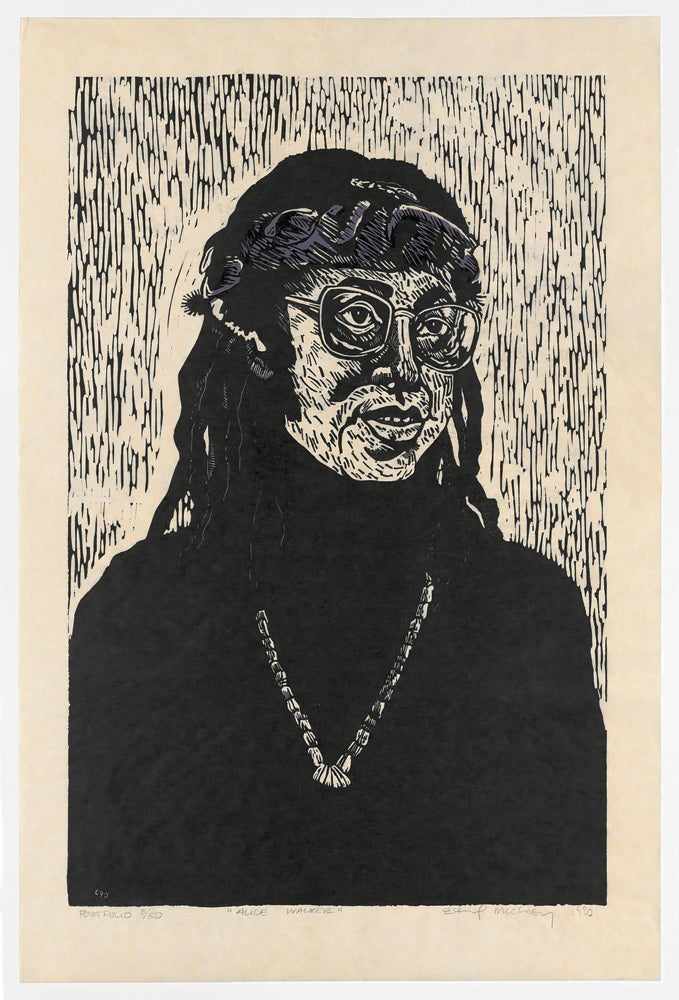 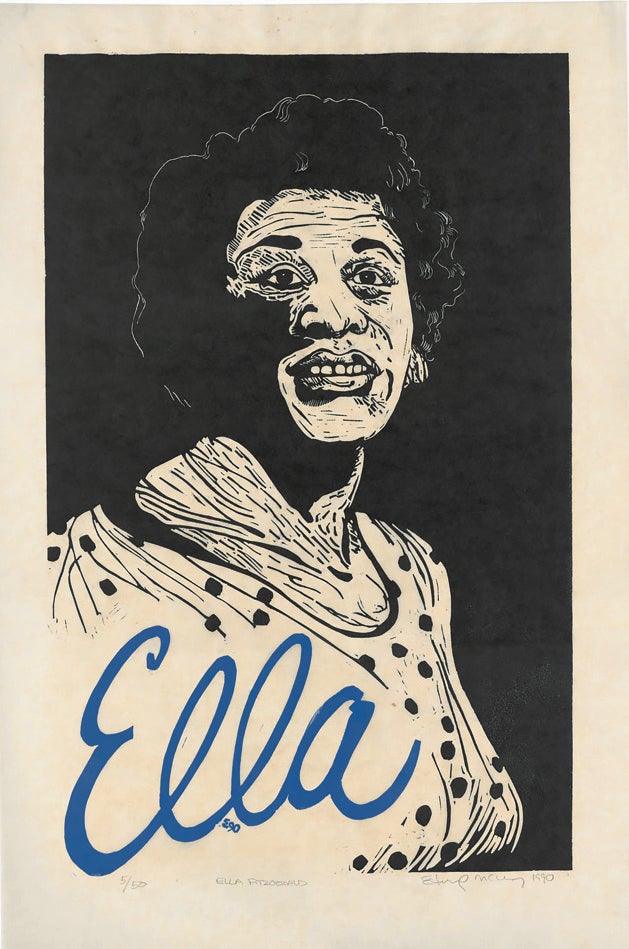 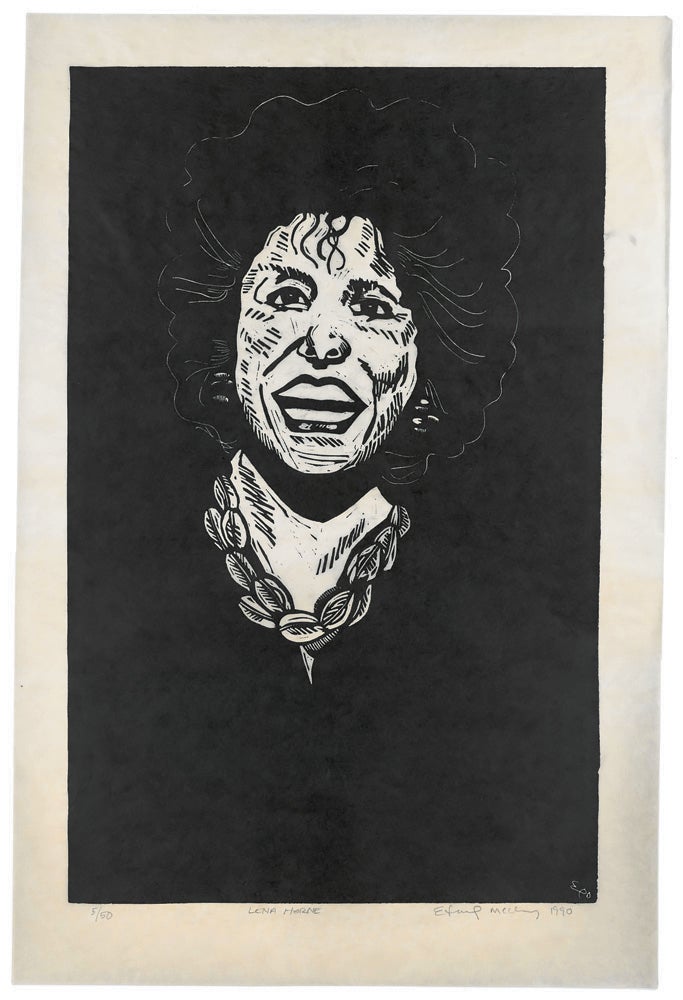 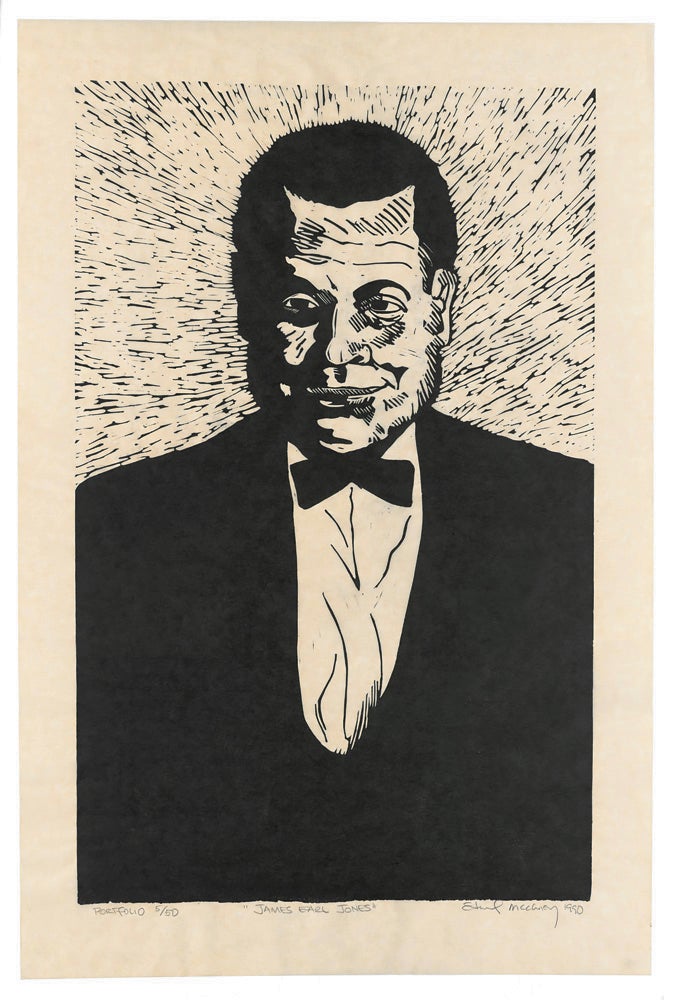 "One morning I was walking with a friend on Madison Avenue in New York City. I must have been speaking fairly loudly because a voice boomed at me,  'You have a great voice, do you do anything with it?' It was James Earl Jones out for coffee. I was blown away and don’t remember the conversation but came away walking on air. I went home to Boston and not only put “JJ” (that’s what he called himself to me) into the Masters portfolio and became a professional voice artist." 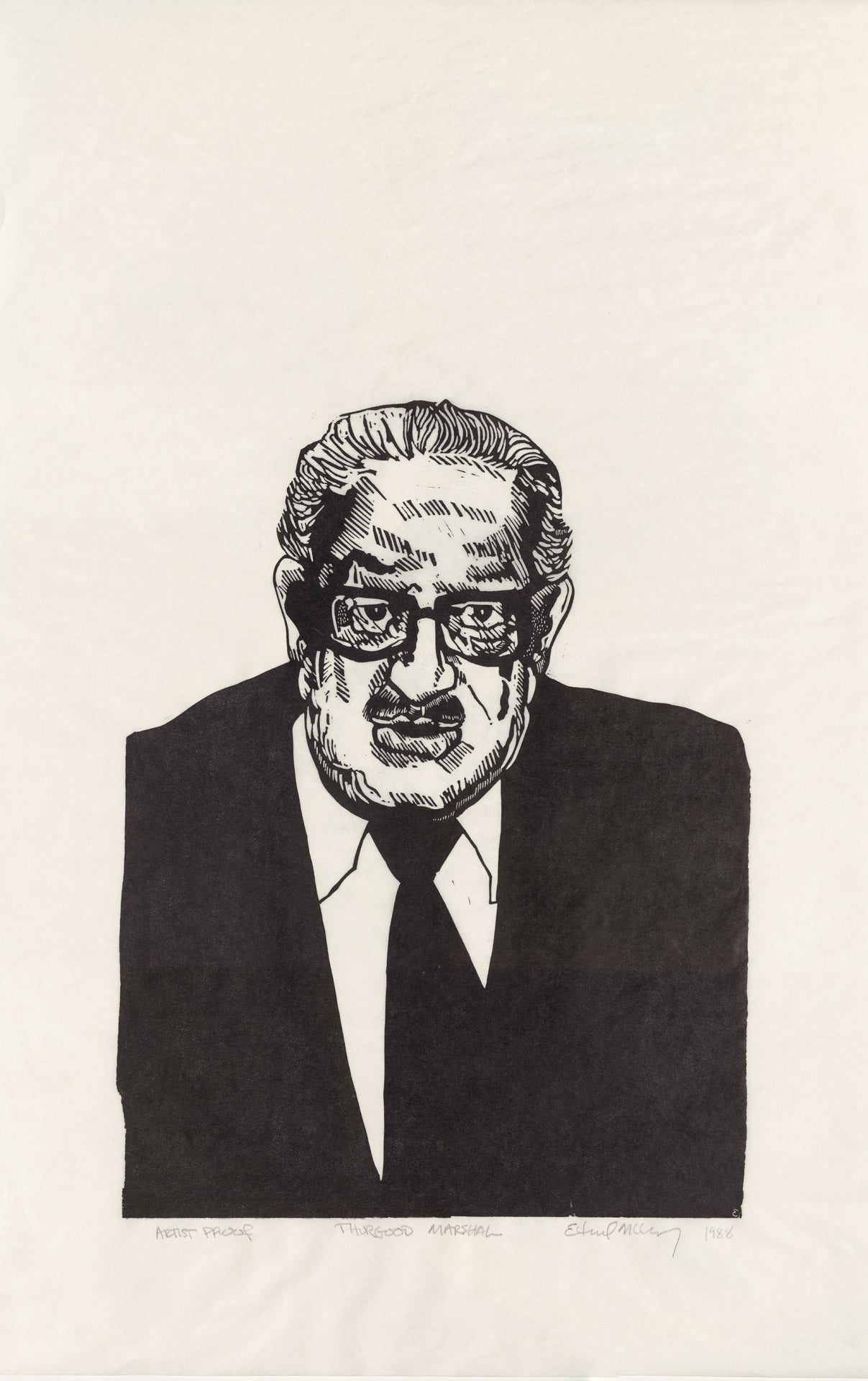 Thurgood Marshall is not part of the Nine American Masters suite, but was created as a commissioned gift. As explained by the artist in his 2016 donation list to Georgetown University:

"Thurgood Marshall was commissioned in 1988 by a group of his law clerks who were Harvard law professors and lawyers, to honor Justice Marshall’s retirement. The group wanted to honor him with a gift that they could also share. We set the edition at fifty images in the set and five artist proofs. Marshall received #1, I was told. This image now hangs in several courthouses, law offices, and homes across the country. Its most prestigious spot, for me, is the foyer of the Harvard University Law Library."

Many of the prints in this section represent early works from McCluney’s graduate period at the University of Massachusetts, Amherst where he studied with Jack Coughlin and Fred Becker, contemporaries of Gabor Peterdi, all well-known printmakers. During this time, McCluney began experimenting with shaped plate intaglios, a technique inspired by the welded metal strips Ed Porter was printing from.

Two characteristics of McCluney’s intaglios are the distinctive shaped plates and the depth of the acid bite in the process of etching. Several of the lone figure prints are made from these cut-out plates and one can detect the deep impression of the plate mark along the edges of the figure’s contour. McCluney prints from zinc plates and uses a coping saw to cut out the shapes. The printing process requires careful calculations on how to orient the plates in the press so the plates don’t curl due to pressure.

Most of the subjects in this section are generic types or "impressions" that McCluney drew from in the course of his day-to-day experience. As a student, he became fascinated with senior citizens and made several prints based on people he observed in his environment or from memory. He often made sketches on site and developed them into prints later in the studio. 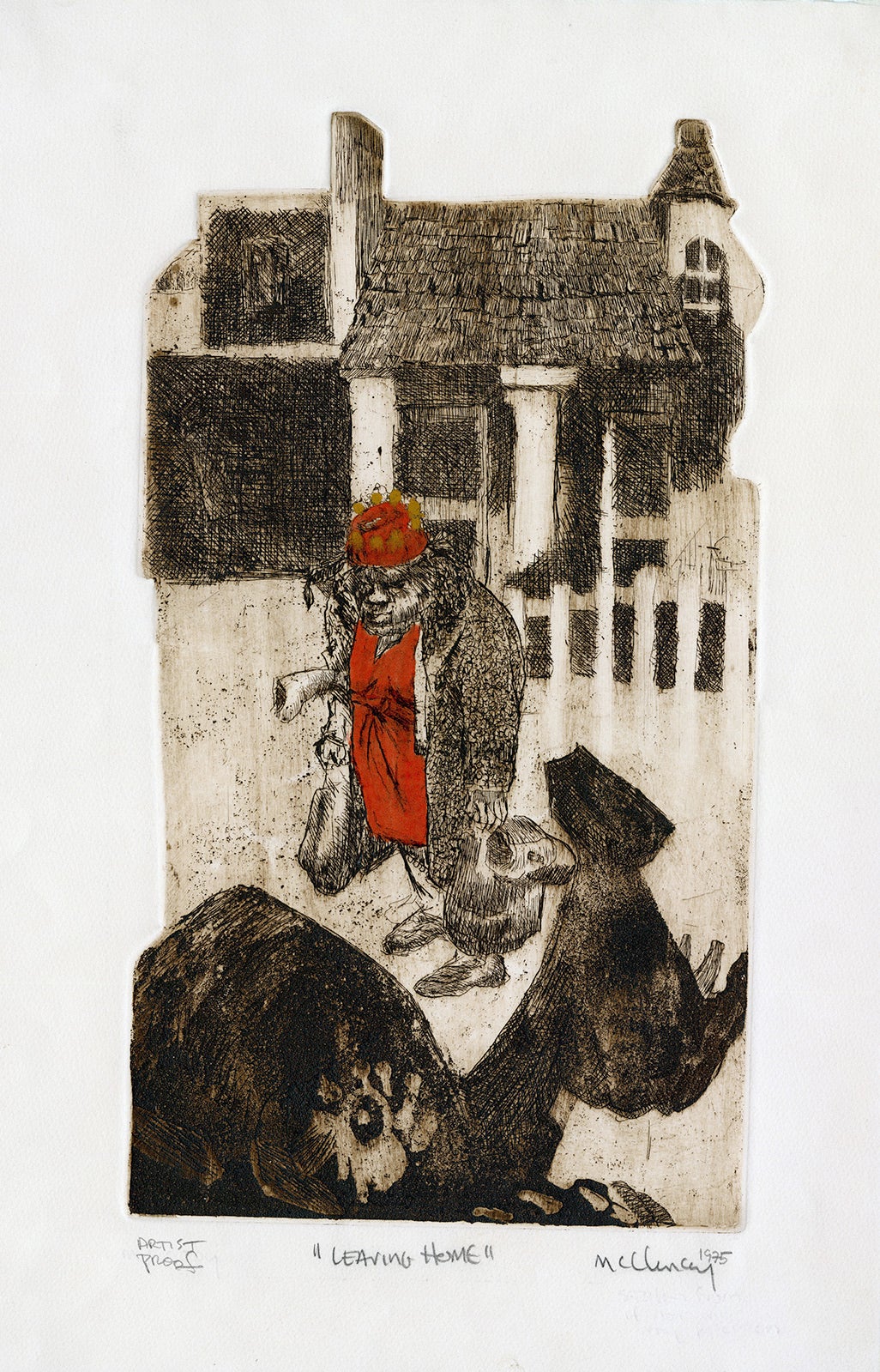 In this early etching, McCluney began with drawing the figure of the woman, then added the house in the background and the backhoe in the foreground. The woman is leaving her home carrying her belongings as a menacing looking machine is poised to destroy her home. 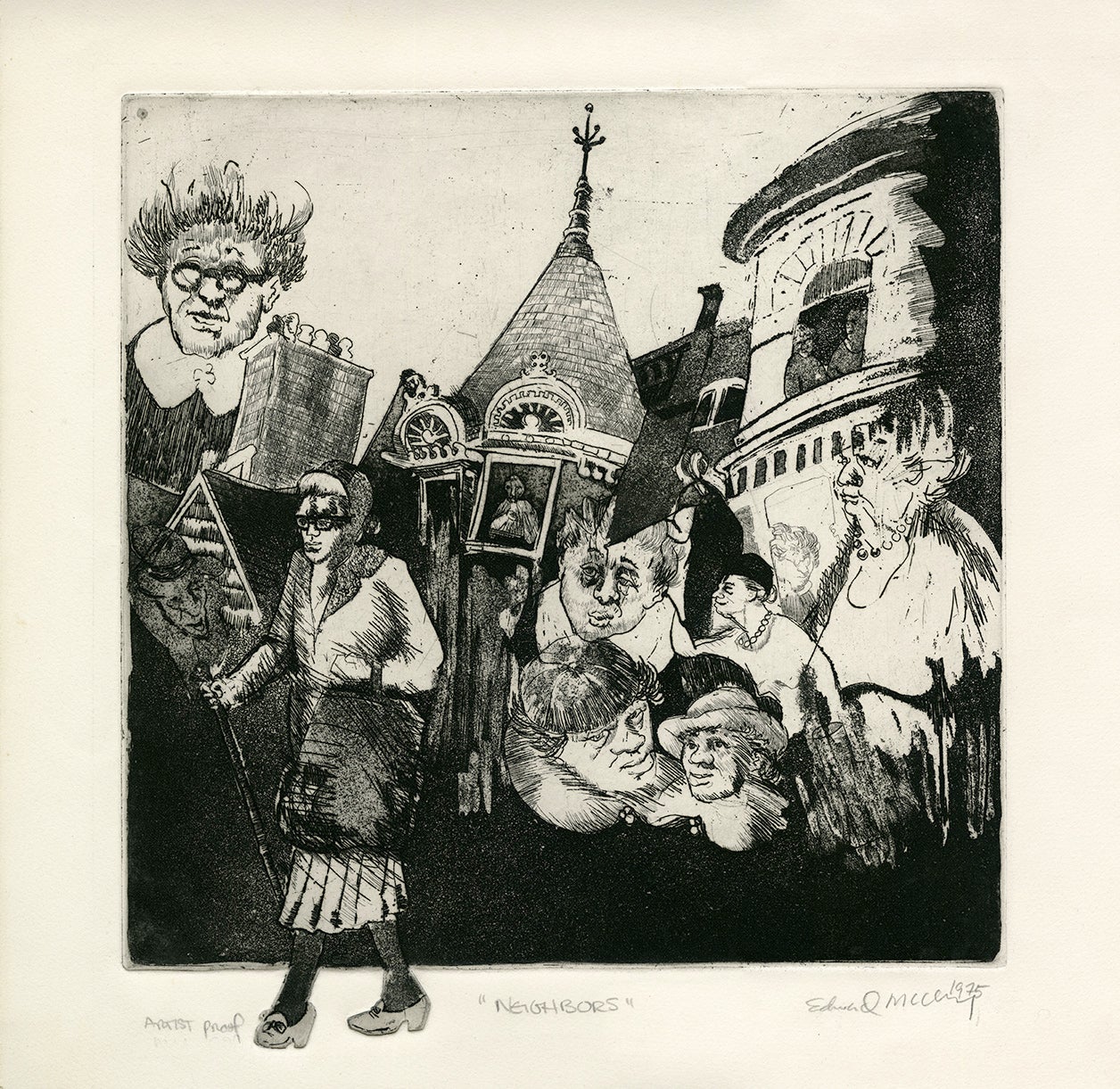 This print was McCluney’s first foray into shaped etchings printed from plates he cut out using a coping saw. In this innovative technique, the feet of McCluney’s ubiquitous walking woman extend into the margin, below the plate line. This composition reveals the artist's love of Victorian houses. The array of faces below an upper story window appear almost like a painted architectural mural. 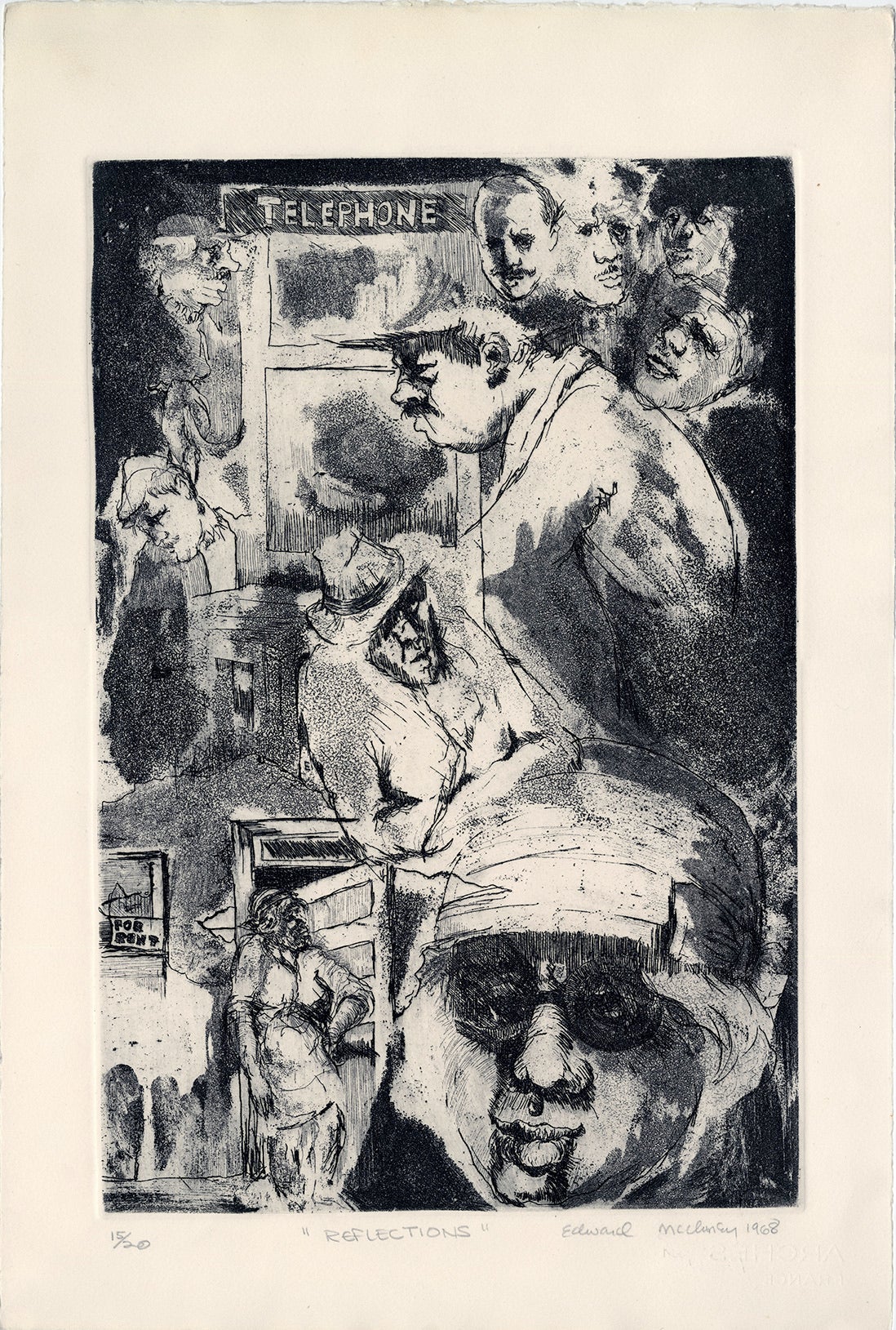 The artist was learning and experimenting with the tonal process of aquatint with this multi-figure etching. In this process, fine particles of rosin are applied to the heated etching plate to achieve an effect similar to watercolor or ink wash on paper when printed. When the aquatint plate is immersed in acid, the agent bites around the fine particles leaving a textured area on the plate. McCluney “liked to push the envelope” and experimented with manually applying the rosin. He used scraps of nylon stockings to serve as a sifter. The title of this compelling montage refers to the artist’s accumulated memories of the past, with people and places he may have sketched or observed at different times. 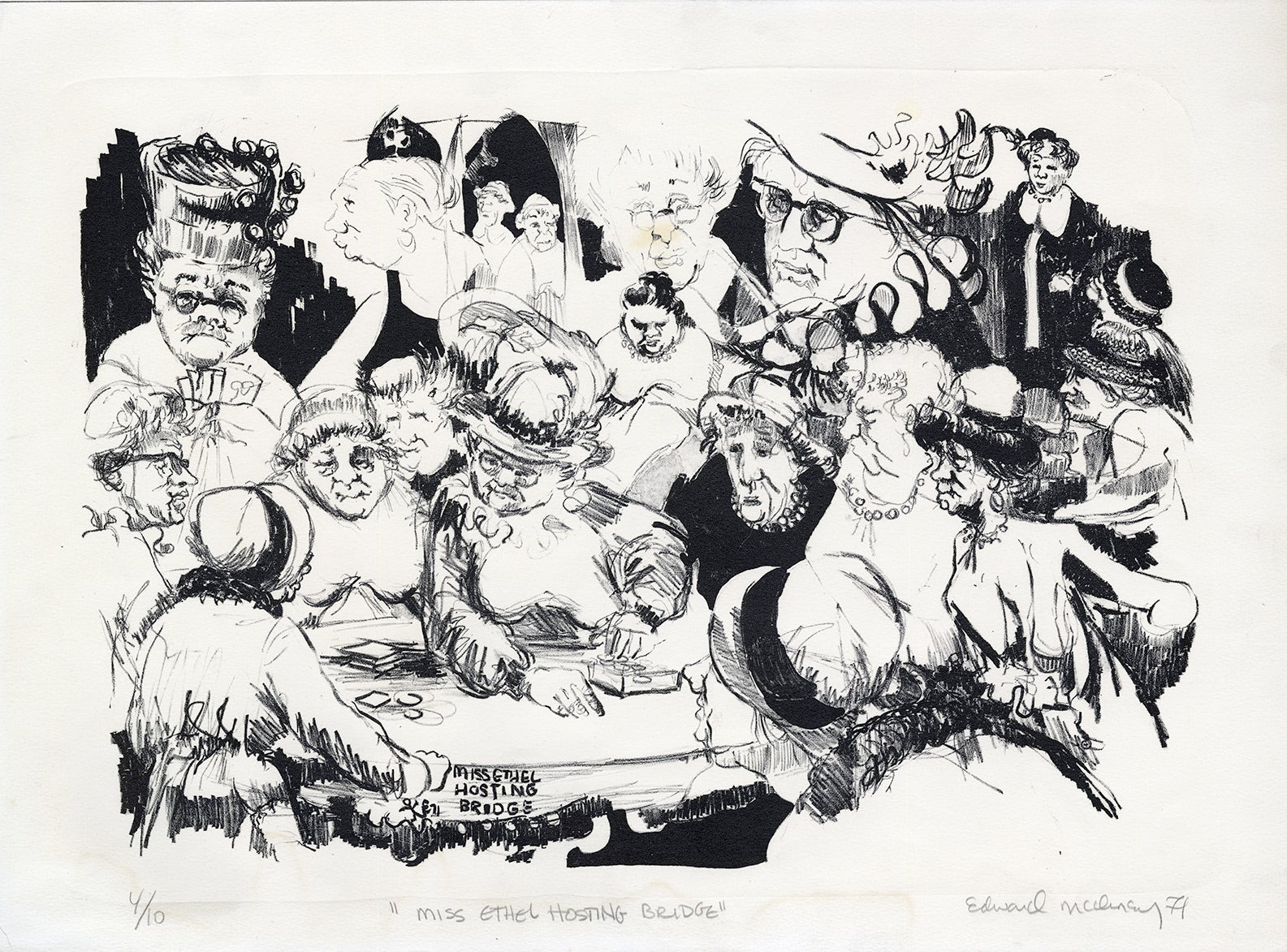 The subject of this lithograph was the artist’s aunt who lived in Norfolk, Virginia. Miss Ethel hosted weekly games of bridge or pinochle during McCluney’s boyhood visits. The older women fashionably dressed in hats and jewelry made an impression that inspired much of his work in graduate school and beyond. At these lively occasions, McCluney served beverages earning some sought-after pocket change. In his Walking Women prints, McCluney focused on the subject's shoes, which appeared too large and would cause the women to walk with a shuffling gait. 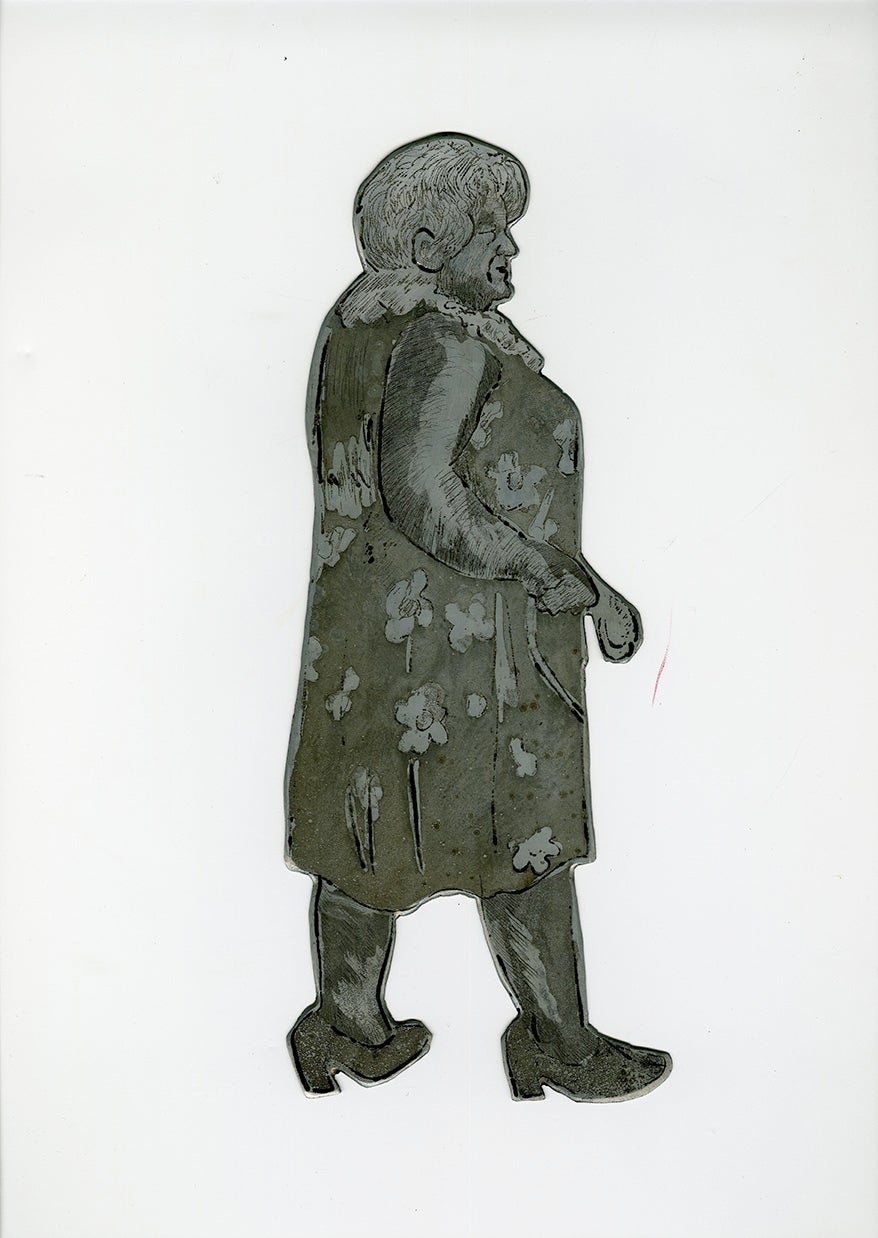 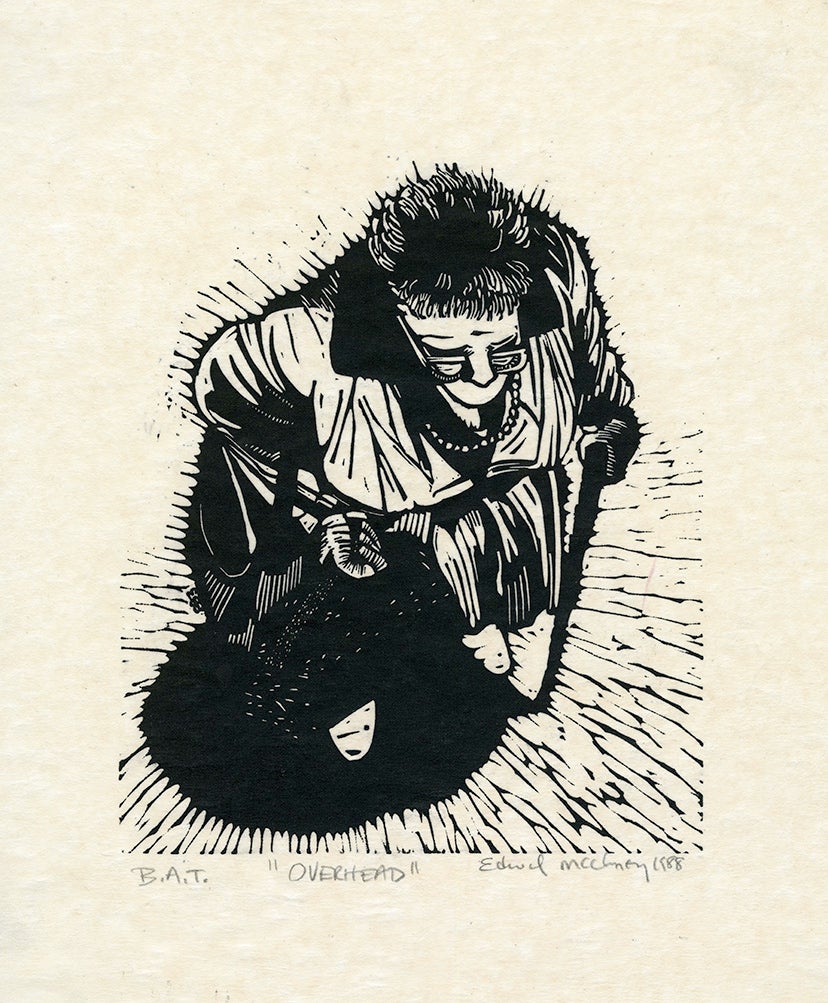 In this and the following linoleum cuts, the artist addressed one of his favorite themes as seen from above, a technical challenge to render effectively in two dimensions. In the linoleum medium, the three dimensional figure is translated through depth of line and flat planes of ink. 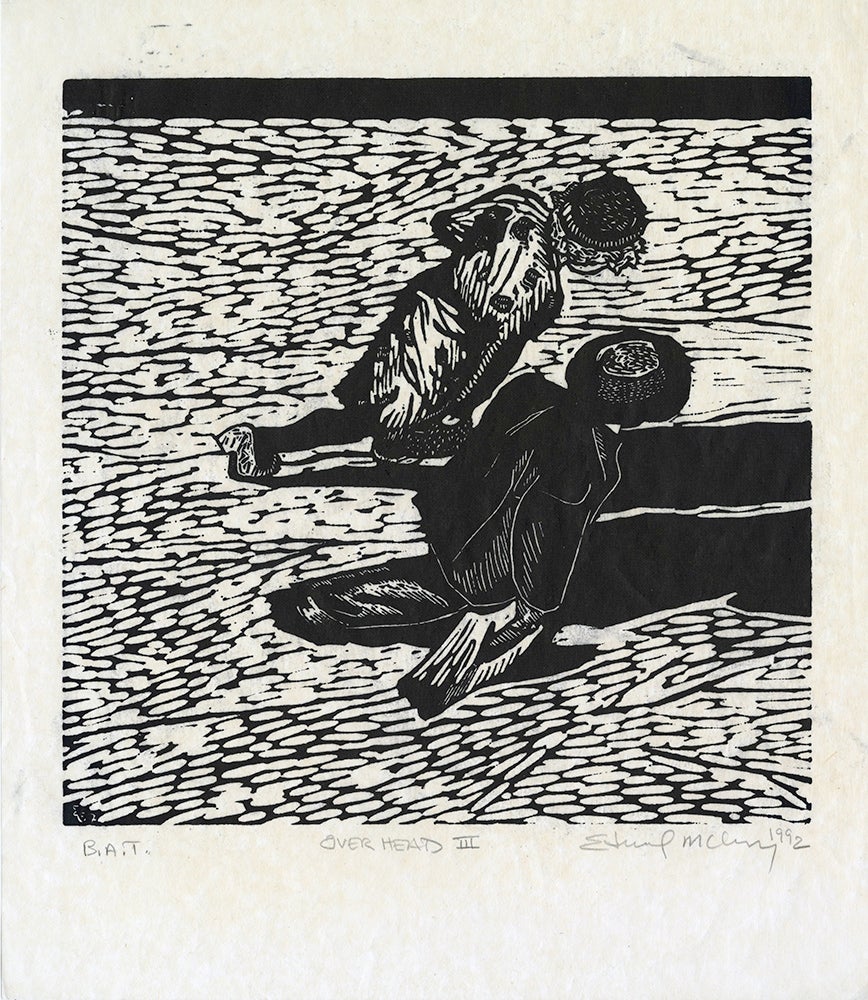 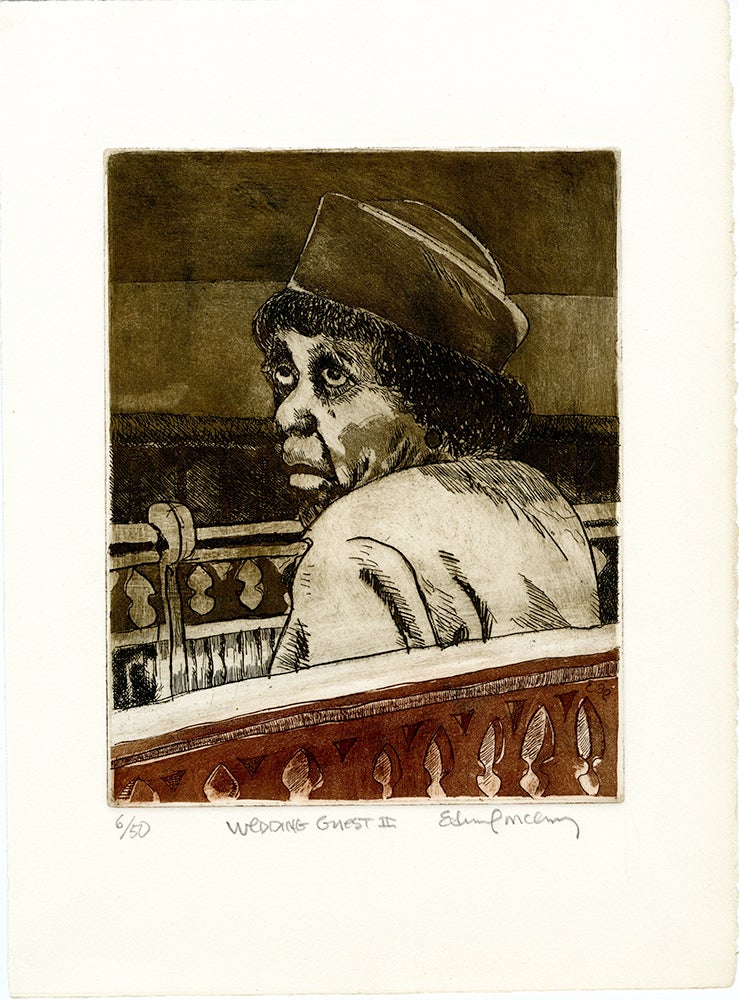 McCluney made this print when he was working as a university photographer at MIT.  On assignment at a wedding in the chapel on campus he observed this woman in the congregation. He later learned she was the grandmother of the bride, who was running late to the ceremony. The grandmother kept turning around nervously to see if the bride had appeared. This etching incorporates three colors: burnt umber, raw umber, and sepia, simultaneously applied to the plate in sections. The plate was then carefully wiped so the ink would remain only in the etched lines prior to printing. 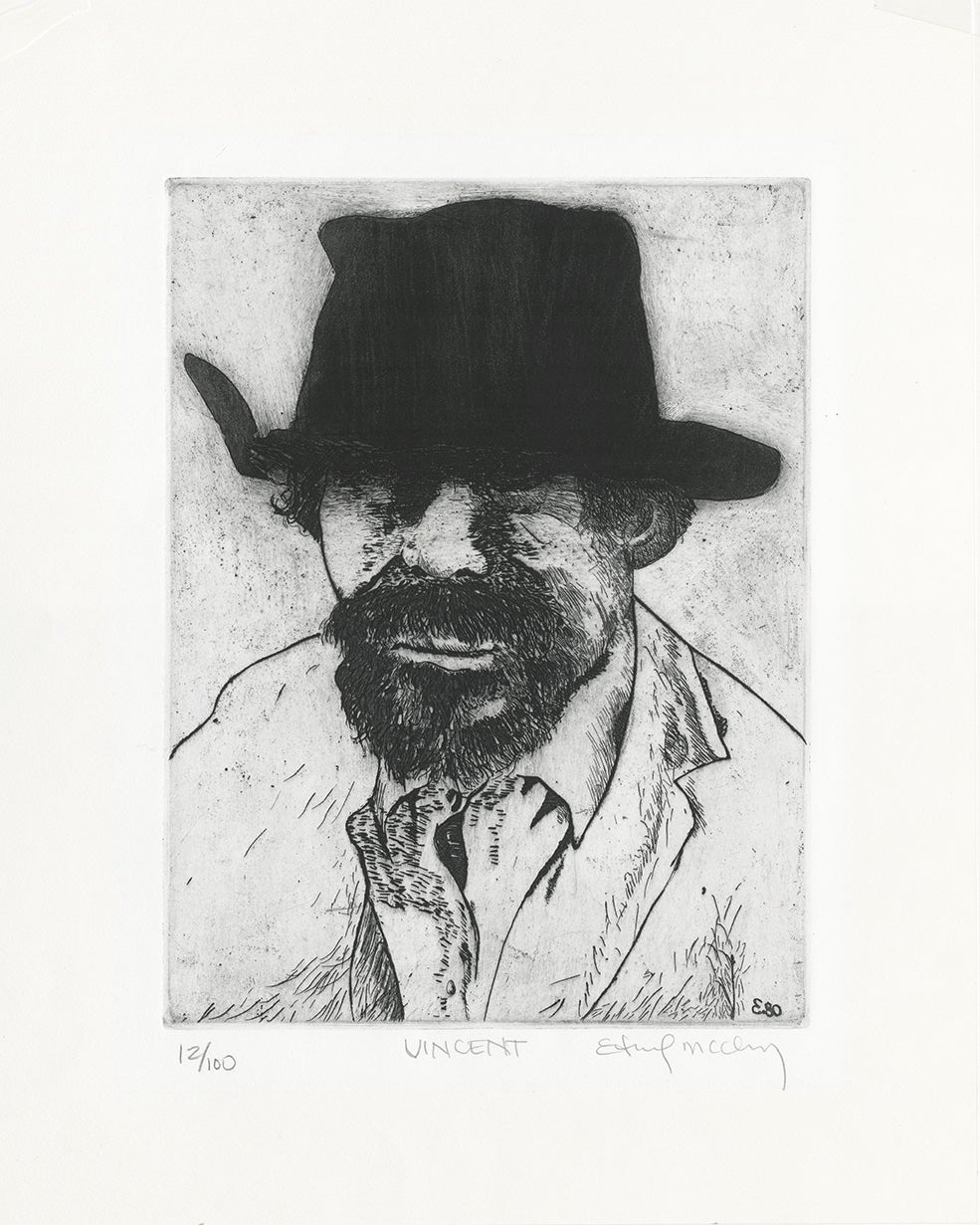 Vincent began as a self-portrait but due to an excessive use of acid in the etching process there was an "explosion" in the acid bath. This actually caused the artist a temporary sight impairment and is one of the dangers associated with etching. The deeply bitten area of the hat which is a rich black is evidence of the event. He saw a resemblance to Van Gogh in this self-portrait. 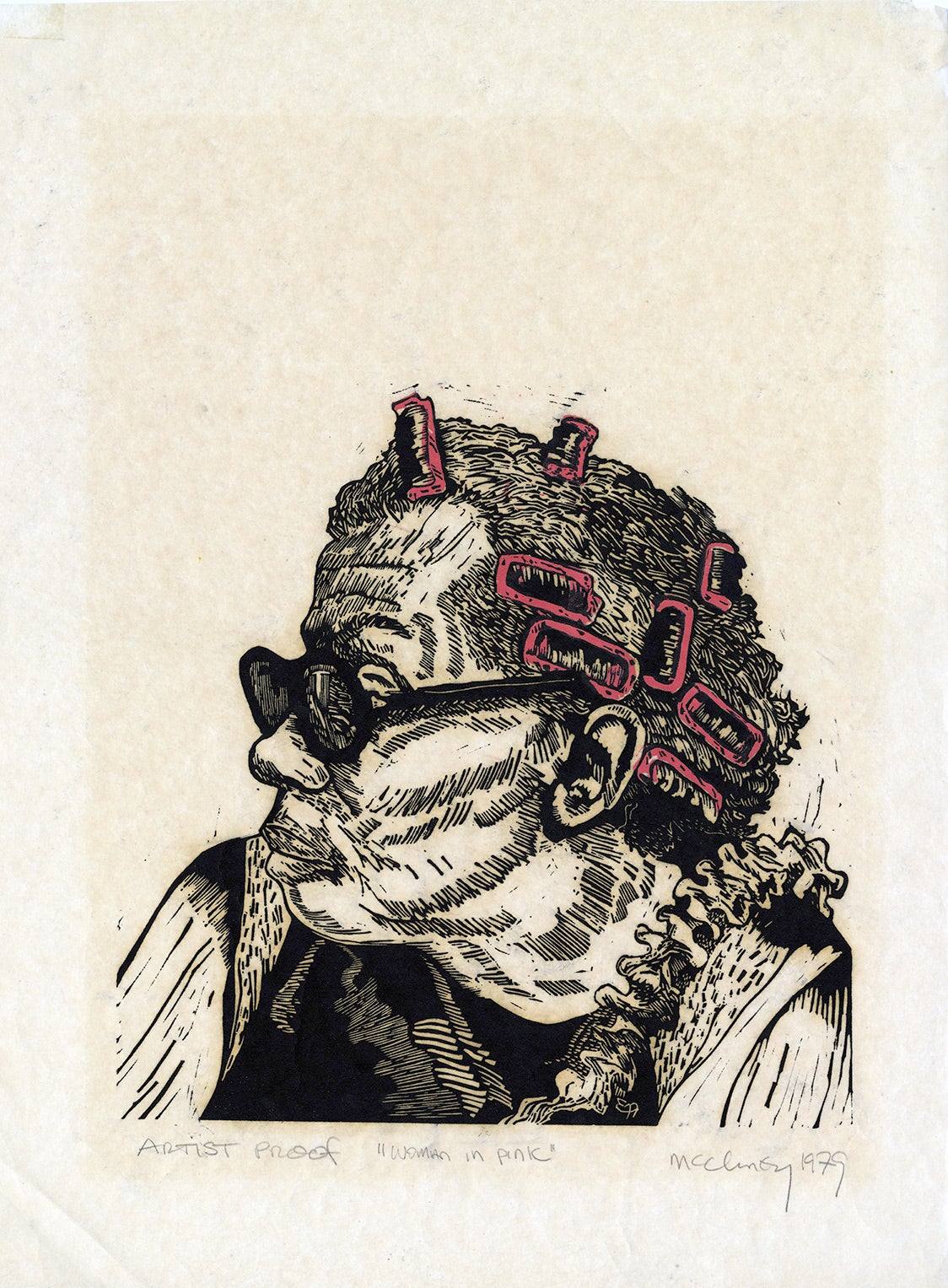 Woman in Pink belongs to what McCluney describes as his “big head series” drawn without a model. He was inspired by a set of pink foam curlers to create this portrait. By adding the color pink, the artist draws more attention to the curlers than the woman wearing them. 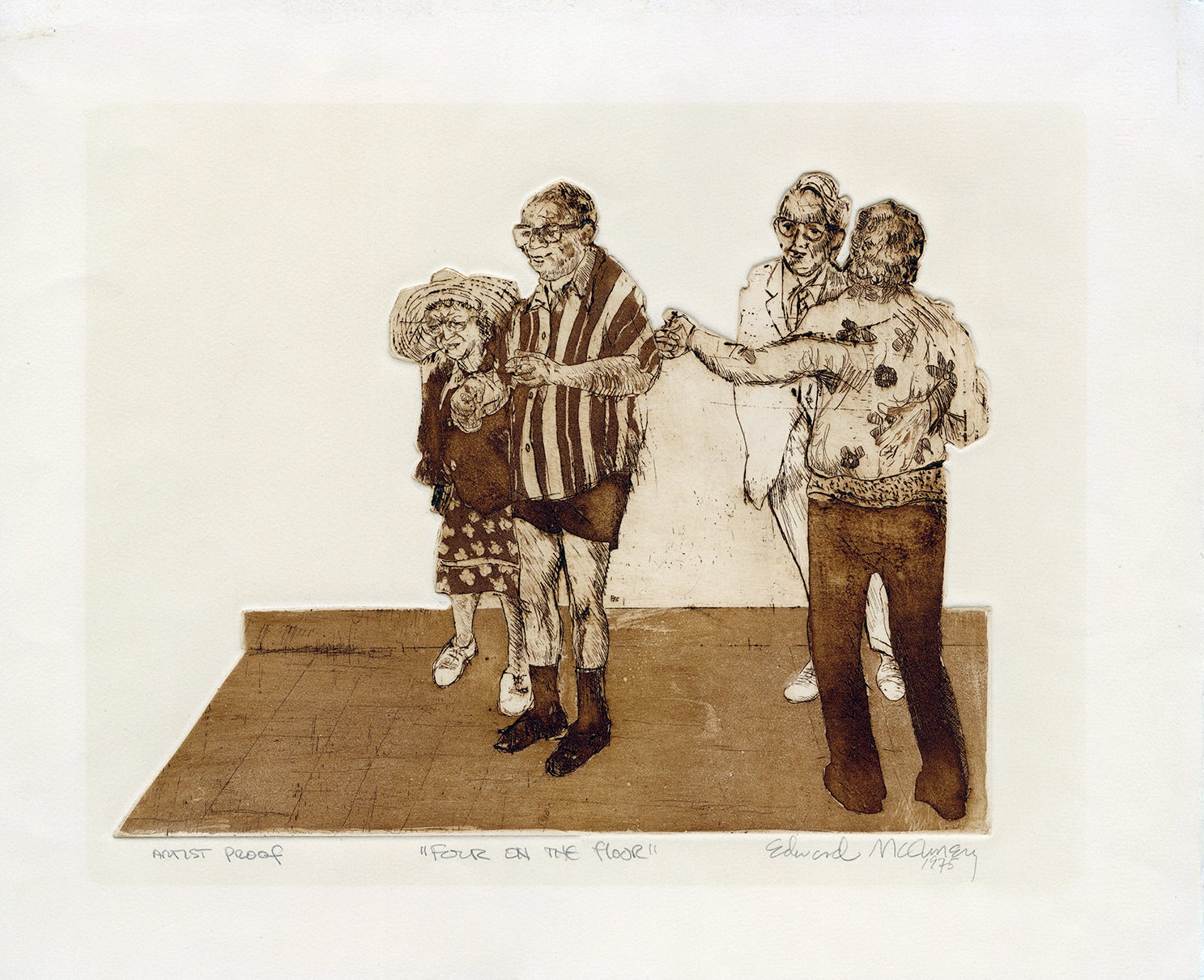 Four on the Floor

Although the title of this print describes these dancers McCluney observed in barns and other venues, it also refers to a specific rule he had to enforce as a Dorm Master at University of Massachusetts, Amherst.  One of the rules stipulated that in co-ed dorms and private rooms couples had to have four feet on the floor at all times.  According to the artist, students found many ways to bend this rule which he took humor in at the time. 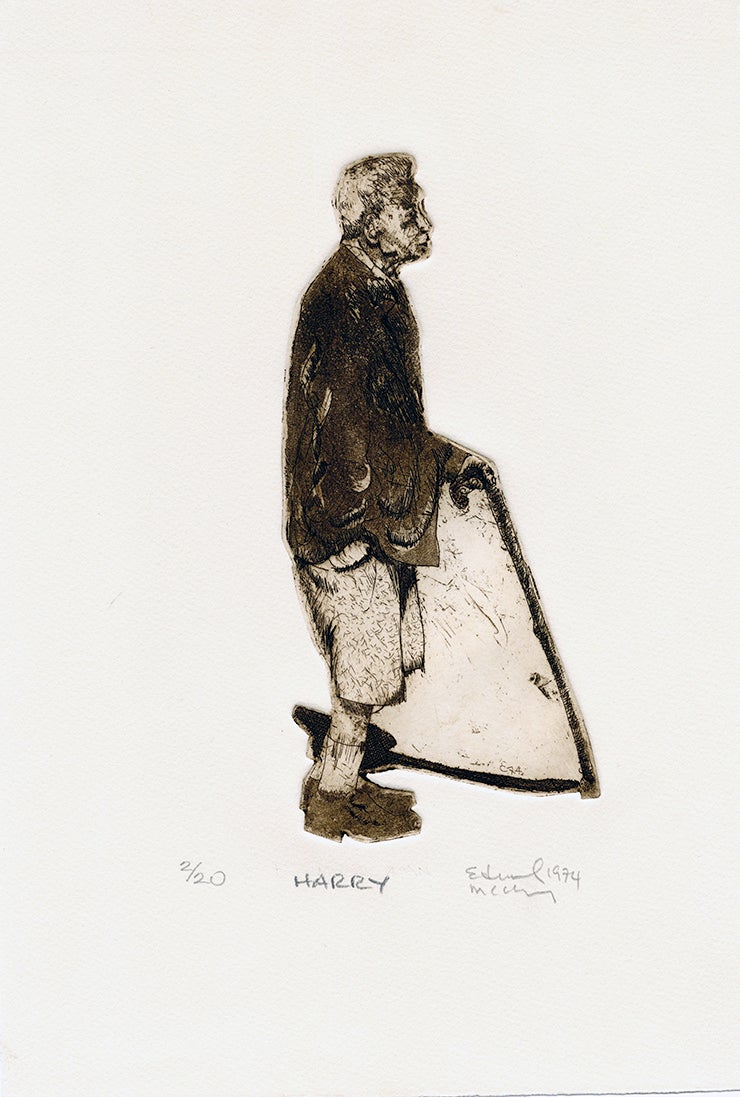 Harry, dressed in Bermuda shorts, is a figure the artist observed walking on Virginia Beach. To print this plate was technically challenging. With 1,000 pounds per square inch pressing on the plate, it was a struggle to keep the figure’s walking stick, a thin strip of zinc, from curling during printing. 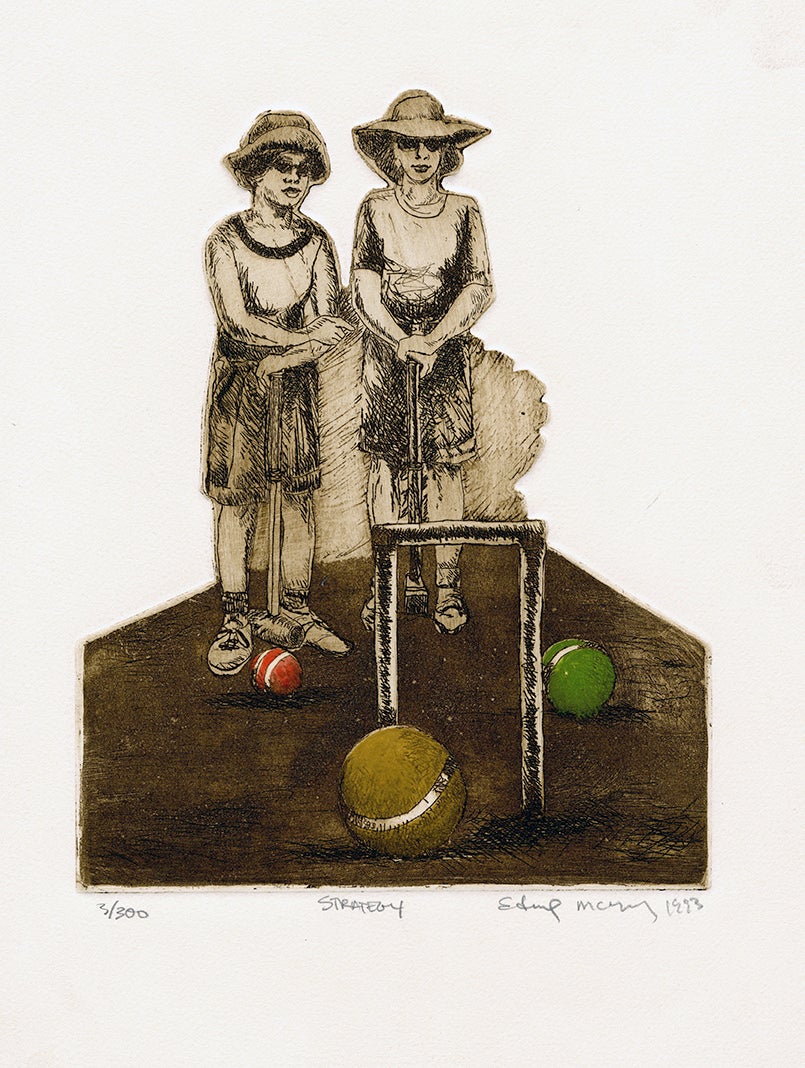 McCluney enjoys the game of croquet and was introduced to it in Bar Harbor, Maine. At that time, women played in separate circuits from men. The simplicity of this print belies the complexity of this sport. The yellow ball appears to have just missed its goal as two players contemplate their next move. With effective use of perspective the ball in the foreground appears to have been lobbed there by the viewer.