Georgetown and the Hemisphere

An exhibition prepared for the Georgetown Reception at the Summit of the Americas.

Georgetown University is widely known as a magnet for students interested in international studies. Today, students from over a hundred nations have chosen to pursue their education at Georgetown. In this century, the Edmund A. Walsh, S.J. School of Foreign Service has provided a focus for Georgetown's presence in the international community. It must be noted, however, that a strong international orientation dates from the earliest days of John Carroll's Academy on the Potomac. At the time of our founding in 1789, American colleges were local, or at most regional schools. In New England, for example, an estimated 91% of the students were natives of the region. In contrast, Carroll's academy was from the beginning a national, indeed international, school. In the first decade nearly one-fifth of its students came from outside the United States, including many from the Caribbean area. It is thus appropriate that the first prospectus printed after the founding was published in French and Spanish, as well as English. In 1879 an attempt was made to compile an alumni roster for the period 1812-1879. The work is far from complete, but the numbers are nonetheless surprising: 221 students are listed from other countries in our hemisphere, including 64 from Cuba, 44 from Mexico, 32 from Canada, and 18 from Chile. Remember, these were the days when we were graduating less than ten students per year. For example, Cuba's total exceeded that of California (48).

Significant numbers of international students have continued to attend Georgetown to the present day. The list includes such distinguished men as Tomás Herrán of the class of 1863, who, as the representative of Colombia, negotiated the Hay-Herrán Treaty; and Feliz Cipriano Zegarra, College 1864, former Peruvian Ambassador to the United States. Juan Sacasa attended the College in the 1890's and served as President of Nicaragua; former President of Ecuador and Secretary General of the Organization of American States Galo Plaza, attended the School of Foreign Service in the late twenties; Luis Muñoz Marín, the political father of modern Puerto Rico, attended the Prep division and later enrolled in the Foreign Service School; Alfredo Cristiani, Business '68, is President of El Salvador. American graduates active in hemispheric affairs have included our most famous alumnus, President Clinton of the class of 1968; Bailey K. Ashford, MD 1896, who is credited with eradicating hook worm from Puerto Rico; Ambassadors Willard Beaulac, Richard Buttrick, Diego Asencio, Viron Vaky, Lev Dobriansky, and John Gordon Mein. William Manger, LLB 1921, PhD 1926, served as Assistant Secretary General of the Pan American Union and the Organization of American States. Former government Professor José Sorzano (SFS '65, Ph D. '72) left Georgetown to serve as Director for Inter-American Affairs at the National Security Council, and also served as deputy ambassador to the United Nations.

Georgetown has also enjoyed an international faculty, and, in this century, the faculty has taken an increasing role in international affairs. Our founder, John Carroll, represented the Continental Congress in a mission to Canada. Our third President, Rev. William DuBourg, S.S., was born in Sainte-Domingue, but came to Georgetown after fleeing Jacobins in southern France. Rev. José Lopez, S.J., our sixteenth President, had served as chaplain and advisor to Agustin de Iturbide during his brief reign as emperor of Mexico. In this century, L.S. Rowe, former Director General of the Pan American Union, served on the faculty of the Foreign Service School; and Professor of Latin American History Thomas Dodd is presently serving as U.S. Ambassador to Uruguay. We are particularly proud of the performance of our faculty at the United Nations: Professors Jeane Kirkpatrick, Donald McHenry, and Madeleine Albright have represented the United States at the United Nations; and, as mentioned above, Professor Sorzano served as Deputy Ambassador and earlier as U.S. representative to the Economic and Social Commission.

This small display, prepared on the occasion of the Summit of the Americas, highlights the history of Georgetown's relations within the western hemisphere.

Selections from the Exhibition:

Nicholas and Jean Jacques Fevrier entered the college April 17, 1792 from the French West Indies. Note that the bill was paid in part by a barrel of Muscarado sugar, and a supply of coffee. The first Hispanic student, Francisco Ignacio DiAyala entered November 15, 1793. 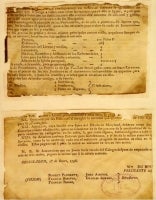 Fragments of the Spanish edition of the 1798 Prospectus

It was also printed in French and English.

DuBourg was born in Sainte-Domingue but came to Georgetown from France from which he fled five days before a Jacobin raiding party murdered four of his seminarian instructors. Note that not all our Presidents have been Jesuits.

Dr. Ashford is credited with eradicating hookworm from Puerto Rico. 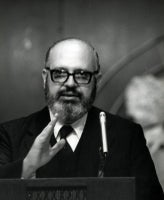 Some may remember Ambassador Asencio's "grace under fire" when held hostage for 61 days in Colombia. 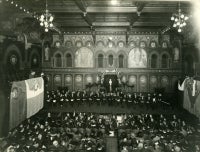 A portion of the Diplomatic Corps 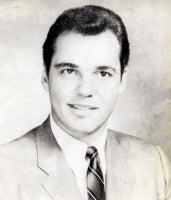 As the representative of Colombia, Herrán negotiated the Hay-Herrán Treaty.

Zegarra served as Peruvian Ambassador to the United States. 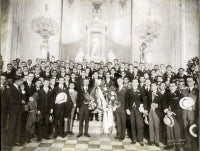 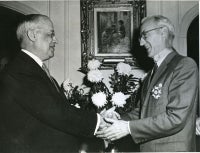