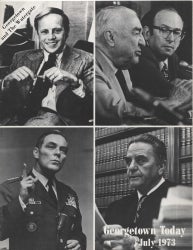 Thirty-five years ago, on June 17, 1972, several men were caught breaking into the Democratic National Committee office at The Watergate.  At first, this was viewed as nothing more than a minor burglary.  Over time, however, direct connections to President Richard Nixon's re-election campaign and to the President himself were discovered and, after two years of investigative reporting, judicial proceedings, and Congressional hearings, President Nixon resigned.  Pictured on the cover of this university publication are (clockwise from top right): John W. Dean III; Samuel Dash; Judge John J. Sirica; and Alexander M. Haig.  The lives of these four, along with a number of other Georgetown alumni and faculty, were impacted by the fall-out from Watergate.

In this AP wirephoto taken on June 26, 1973, John Dean is shown during his second day of testimony before the Senate Select Committee on Presidential Campaign Activities, otherwise known as the Ervin Committee.

John Dean (1938-    ) graduated from the Georgetown University Law School in 1965.  By 1970, he was counsel to President Nixon.  After the break-in, Dean was called in by White House assistants John Erlichman and H.R. Haldeman to coordinate its cover-up and White House officials later tried to implicate him as the mastermind behind the conspiracy.  In April 1973, Dean issued a statement saying that he would not be a Watergate “scapegoat” and ten days later he was fired.  Dean, probably more so than any one else, became identified with the unraveling of the scandal and his week-long testimony in front of the Senate Select Committee provided the core evidence linking President Nixon to the cover-up.

When asked in late 1974 what the country should learn from Watergate, Dash  responded: “Initially, what we should learn from Watergate is that it can happen here.  We could come close to losing our democracy and our free society.  I believe that the persons involved in the Watergate - those in the White House who were its primary leaders - did not believe in our government or our free society.  They saw dissent and differences of opinion as disloyalty.”

Chief counsel: Inside the Ervin Committee – The Untold Story of Watergate By Samuel Dash

After graduation from Georgetown in 1926, Sirica (1905-1992) worked as an assistant U.S. attorney for the District of Columbia, as a lawyer with the D.C. firm of Hogan and Hartson, and as counsel to the House Select Committee investigating the Federal Communications Commission.  President Eisenhower appointed him to the U.S. District Court in 1957 and he became chief judge in 1971.  Named Time magazine’s Man of the Year in 1973, he stepped down as chief judge on March 19, 1974, his seventieth birthday.

Newsweek wrote that: “if any one man could be said to have broken the [Watergate] case open it was Chief U.S. District Judge John J. Sirica. . . Sirica unloaded a six-to-twenty year sentence and a $40,000 fine on G. Gordon Liddy, the resolutely closed-mouth ringleader of the wiretapping gang.  Then the Judge handed out provisional maximum sentences to five other defendants—but added a hint that these might be reduced for any participant that came clean to a grand jury or Senator Sam Ervin’s special Watergate committee . . . James McCord, Jr. began singing immediately to the Ervin Committee, and everything else flowed from that.”

To Set the Record Straight: The Break-in, the Tapes, the Conspirators, the Pardon By John J. Sirica

On May 4, 1973, three days after the resignation of H. R. Haldeman as White House Chief of Staff, General Haig (1924-    )was named “interim” Chief of Staff by President Nixon.  Haig had first joined the White House staff in 1969 as a senior military advisor to Henry Kissinger, leaving in January 1973 to become Army Vice Chief of Staff.  In June 1973, he announced that he would retire from active military duty to become permanent assistant to President Nixon. Haig was credited with restoring some order to the beleaguered Nixon White House and with preparing a smooth transition to the Ford Administration when President Nixon resigned from office. 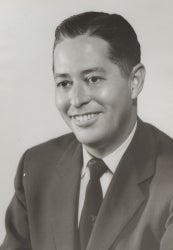 The senior senator from New Mexico, Joseph Montoya (1915-1978) was a member of the Select Committee on Presidential Campaign Activities, the first legislative group to investigate Watergate.  He was noted that the Select Committee’s hearings “produced much more than many people expected.  For many weeks something startlingly new came from almost every session.”

A member of one of New Mexico’s oldest families and, at the time of Watergate, the only Hispanic in the Senate, Mr. Montoya graduated from the Law Center in 1938.  Two years before his graduation, he had been elected to the New Mexico House of Representatives, making him, at 21, the youngest lawmaker in state history. 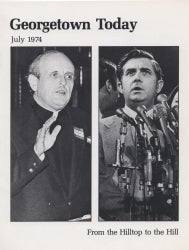 Lawrence Hogan (1928-    )described the Committee sessions in this way: “ The days have been very long.  They generally start at 9 or 9:30 and we go through until 6, or sometimes later.  We’re frequently interrupted with votes on the House floor, but generally we proceed through the presentation of the evidence with the staff summarizing statements from various sources . . . At some junctures, to illustrate the information being presented to us, we listen to the White House tapes.  We all have earphones, which give a very good acoustical effect . . . but some of the tapes have very, very inaudible portions.”

Fr. Drinan (1920-2007), elected to Congress in 1970, was the first Roman Catholic priest to serve as a voting member of that institution.  In July 1973, he introduced the first resolution for the impeachment of President Richard Nixon, an act he said in 1974 meant “only that I though the Congress should investigate the possible existence of probably cause for a trial of the President in the Senate . . . I made no judgment on anything regarding Watergate since matters related to the incident were being considered by the Senate Watergate Committee and, of course, by the courts.”  Fr. Drinan resigned his seat in 1980 and became a Professor at the Georgetown University Law Center. 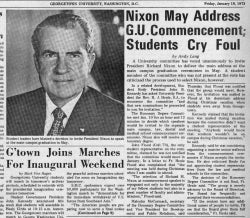 The decision to invite President Nixon to address the 1973 Georgetown commencement and to award him an honorary degree drew angry protests from student leaders who threatened a walk-out if the President attended. In April 1973, shortly before the resignations of presidential aides H.R. Haldeman and John Ehrlichman and the firing of John Dean, President Nixon turned down the invitation and the University announced that the Most Rev. William Baum, Archbishop-elect of Washington, would be the principal speaker at commencement. 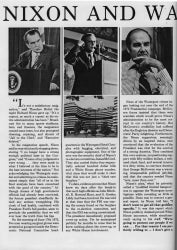 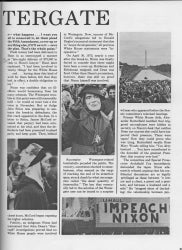 “Nixon and Watergate.” Summary of the scandal in Ye Domesday Booke, 1975

The 1975 yearbook, on page 63, reveals another connection between Georgetown University and Watergate – Frank Wills (1948-200), the private security guard at The Watergate who discovered the break-in at the DNC headquarters, was later employed at Georgetown as a security guard.