The Kennedy Institute of Ethics

50 Years of Bioethics at Georgetown University

Who has the right to make medical decisions for the incapacitated or those with intellectual disabilities?

What are the moral implications of human cloning?

Do individuals have a right to decide how and when they die?

These are just a few of the many moral quandaries that have been investigated and debated by the scholars at the Kennedy Institute of Ethics (KIE) for the past fifty years.

The KIE is a center for practically engaged ethics at Georgetown University. Established in 1971 with a founding interest in medical ethics, it is one of the oldest academic ethics centers in the world. The KIE is notable for being at the forefront of the field of bioethics–its scholars were influential in shaping the scope of the field, combining medical ethics, theology, social science, and philosophy in a distinct discipline.

This exhibition, drawn from materials held by the Bioethics Research Library Archives, provides a history of the KIE from its founding to the present day, particularly highlighting its longstanding commitment to the rights of people with disabilities and its efforts to bring together a diverse and inclusive community of scholars in the field of bioethics. 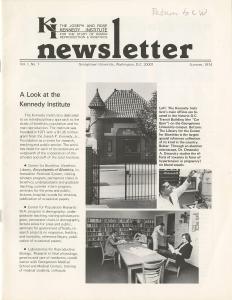 It includes images of the Institute’s original home in the Car Barn, the bioethics library (already the “largest special reference collection of its kind in the country”), and the Laboratories for Reproductive Biology. 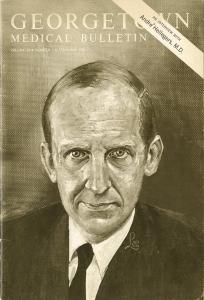 The vision for the KIE was driven by its founding director, André Hellegers. Born in the Netherlands and educated in England, he came to Georgetown University in 1967 as a professor of obstetrics and gynecology. A Catholic physician with a strong interest in ethics, he saw that current advances in medical technology were resulting in increasingly complex moral quandaries involving reproduction, human experimentation, end of life care, and the treatment of the disabled.

Hellegers believed the best way to examine these new ethical questions was through an interdisciplinary approach. “We want to have an Institute where cooperation among people from different disciplines is a reality. We want ethicists, doctors, scientists, and demographers to really talk to each other and work together on problems. The questions we deal with are too all-encompassing to leave to any one group or discipline.”

The convergence of these professions, combined with theologians and philosophers, would soon shape and define the field that is now known as “bioethics.” 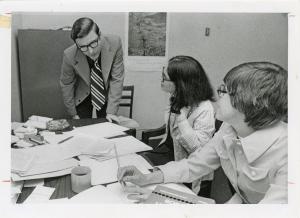 Photograph of LeRoy Walters (Director of the Center of Bioethics), Maureen Canick (librarian), and Renee Johnson (librarian) compiling the first Bibliography of Bioethics

Formally established in 1973, the Bioethics Research Library (now located in nearby Healy Hall) was the world’s first library devoted to bioethics. The library proved to be highly influential in shaping the field of bioethics itself. The literature of this new field was produced by scholars in a variety of disciplines, such as philosophy, theology, law, and medicine. Before the computer age, there was no easy way to access these materials. The KIE soon produced the Bibliography of Bioethics, one of the first efforts to assemble a catalog of shared literature on the emerging field.

This was followed by the Encyclopedia of Bioethics. Edited by Warren T. Reich, the Encyclopedia would come to define over 300 bioethical terms and topics for the first time. In 1978 the Kennedy Institute created the first electronic database of bioethics literature (referred to at the time as a “computerized literature retrieval service”). In the age before widespread internet access and personal computers, this was a revolutionary development. 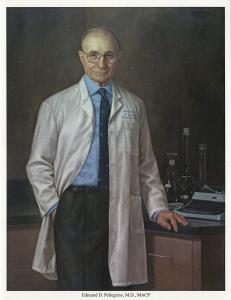 Dr. Pellegrino was a founding figure in the field of bioethics and a Georgetown scholar and administrator for over thirty years. Pellegrino believed that health care professionals had an obligation to consider the moral and ethical implications of their work, particularly their interactions with patients. He had this to say about his work at the University of Kentucky in the late 1950s and 1960s:

“I began to teach medical ethics to my residents just as part of the ordinary teaching idea. We called it the Morning Report, where I would go over the cases that came in over the last 24 hours with the residents. I don’t want to claim to be the first, but I didn’t know of anyone doing that, certainly not a chairman of the department of medicine.”

As director of the KIE in the 1980s, he stabilized the finances of the Institute. Remarkably, Pellegrino continued to teach and write prolifically while managing the KIE, publishing dozens of articles on medical ethics during his tenure as Director. 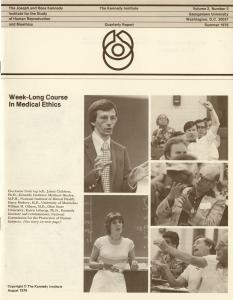 The Institute began hosting the annual Intensive Bioethics Course (IBC) in 1975. It was initially designed to introduce health care professionals to the field and provide them with an opportunity to study and reflect on the major medical ethics issues of the day. Soon, the course would attract a variety of other professionals with an interest in bioethical issues, such as professionals, philosophers, theologians, policy makers, and hospital chaplains, among others.

The IBC proved to be highly influential. The foundational lectures on bioethics were rooted in an approach called Principlism and focused on respect for autonomy, beneficence, non-maleficence, and justice. KIE scholars Tom Beauchamp and James Childress proposed this approach in their textbook, Principles of Biomedical Ethics, which has helped to shape bioethics both in the U.S. and around the world. 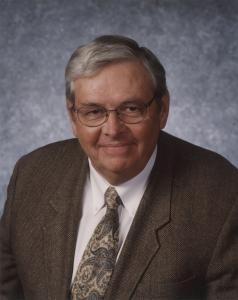 Dr. Veatch is another towering figure in the field of bioethics who spent over 40 years at the Kennedy Institute of Ethics (including a seven-year term as Director from 1989-1996). He first studied pharmacology before earning his PhD in Religion and Society from Harvard University, studying medical ethics. He had a lifelong interest in social justice and pacifism–as an undergraduate at Purdue University he led the efforts to end compulsory ROTC enrollment and would go on to work in Nigeria as a Peace Corps volunteer in the 1960s.

He made major contributions to theory and policy regarding transplantation ethics, ethical issues in death and dying, and issues of consent both in therapy and in human subject research.

Veatch served the field of bioethics in many ways, as a teacher, a prolific author, a member of advisory committees and editorial boards, and as an ethics consultant to important legal cases, including the landmark legal case of Karen Ann Quinlan, a woman whose parents won the right to forgo life-support (1975-1976). He also testified in the case of Baby K, an anencephalic infant whose mother argued for a right of access to continued ventilator support (1994). From 1981 to 1982, he served as a consultant to the President’s Commission for the Study of Ethical Problems in Medicine and Biomedical Research. 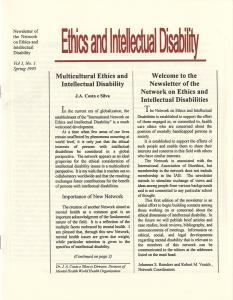 Newsletter of the Ethics and Intellectual Disability Network, Vol. 1, No. 1

From its founding, the Kennedy Institute of Ethics has been at the forefront of investigating bioethical issues as they relate to people with disabilities. These issues include discrimination against people with disabilities who are in need of organ transplantation, genetic screening, and the termination of pregnancies in the case of severe fetal abnormality.

Robert Veatch, a foundational figure in the field of bioethics and Director of the KIE from 1989 to 1996, was the founding co-editor of the Newsletter of the Ethics and Intellectual Disability Network. Veatch was particularly concerned with the rights of those who could not communicate or provide consent, such as individuals left in a persistent vegetative state.

Today, the Institute is home to a number of scholars who are examining disability ethics, such as Sean Aas, Quill Kukla and Joel Michael Reynolds. Kukla and Reynolds are also core faculty members of the Disability Studies program. 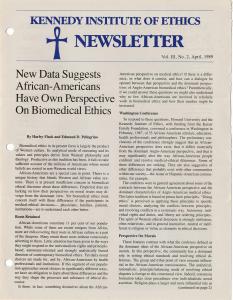 This issue of the Kennedy Institute of Ethics Newsletter details the 1987 conference on Black Americans' approaches to bioethics, co-sponsored by the KIE and Howard University. The KIE has a long tradition of exploring bioethical issues from a variety of viewpoints. In the 1970s, the Jewish and Islamic scholars joined the Institute as Visiting Researchers. Patricia A. King, Professor of Law emeritus, lectured on the intersection of race and bioethics for decades as part of the IBC. In the 1980s, the KIE built relationships with bioethics communities across the globe, particularly in Japan and Germany. And today, the Bioethics Research Library continues to develop the Islamic Medical and Scientific Ethics (IMSE) Database. 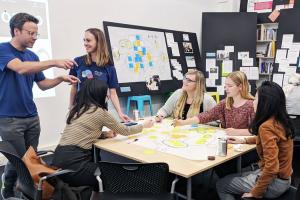 Photograph of students and faculty at an Ethics Lab workshop

"Georgetown is taking its history and culture of ethics, its courage with hard conversations, as well as its storied innovation with pedagogy, to help found the field of digital ethics."

Hellegers’s vision of an interdisciplinary approach to the study of ethics lives on in the KIE’s Ethics Lab, where philosophers and designers work with students to address some of the increasingly complex ethical issues of the modern world. Ethics Lab develops and implements new courses, partners with faculty from a variety of disciplines to integrate ethics into their curricula, and engages with specialists across sectors, in workshops and ongoing partnerships, to expand their ability to make ethical considerations central to their work and decision. 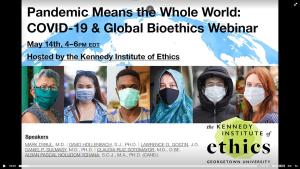 Screenshot of the Pandemic Means the Whole World: COVID-19 and Global Bioethics webinar

With the outbreak of the COVID-19 pandemic, KIE scholars sponsored numerous webinars on pandemic ethics, several of which addressed the disparity in response across the globe. These webinars have been digitally preserved by the Bioethics Research Library Archives.