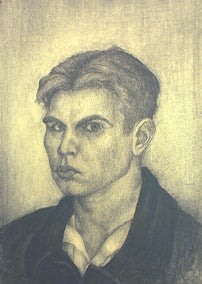 Drawn from the wealth of resources by and about Lynd Ward in Lauinger Library's Special Collections Division, this exhibition focuses on his original designs for book illustrations, primarily those for children. His extensive achievement in the medium of wood engraving, which established his reputation as an illustrator, is a subject we hope to develop in a future exhibition. A comprehensive overview of the artist's work in all media was exhibited in the Gunlocke reading room soon after the family decided to donate more than 1,000 works of art as well as most of his personal and business correspondence to the library in the early 1980s. The pieces in the current exhibition, executed in watercolor and a variety of drawing media, reveal Lynd Ward's unique talent as an illustrator, beginning with Prince Bantam (1929) the first of many collaborations with his wife as author, and ending with The Silver Pony (1973), just a few years before ill health caused his retirement from the field.

Background on the Artist

As a young boy growing up in Illinois, Massachusetts and New Jersey, Ward's moral outlook was shaped by the principles of his father, a Methodist minister sympathetic to social causes such as Chicago's Settlement House and the Russian Revolution. His artistic vision was sparked by such picture books as Gustave Doré's Bible illustrations and a story about toys coming to life. These images, preserved in memory, initiated a process of thinking in visual images. This enabled him to create the type of dynamic imagery which could tell a story without the benefit of words. Ward described this process in the article summarized below.

Lynd Ward received his fine arts degree from Columbia University's Teacher's College in 1926, marrying his future collaborator and fellow graduate May McNeer the same year. While honeymooning in Europe they settled in Leipzig where Ward enrolled in the National Academy of Graphic Arts, studying the techniques of printmaking and book design for a year. Some early compositions from this period are preserved in Special Collections, including the penetrating charcoal Self-portrait reproduced here.

He returned to America at a time when book illustration was a relatively open field, and his first story comprised entirely of woodcut images, God's Man, was published in New York in 1929, establishing his reputation as an illustrator when the artist was only twenty-four. God's Man was succeeded by five others in the same genre, all in great demand throughout the Depression years. During this time Ward played an active role in the field of publishing, founding Equinox Press, a cooperative for established figures in the New York book publishing circle. He also was named director of the graphic arts division of the Federal Writers Project in New York City from 1937-39. The publication of a multi-volume edition of Les Misérables in 1938 inaugurated a series of classics Ward produced for George Macy's Limited Editions Club and its trade publication offshoot, the Heritage Press.

Ward returned to the story-in-pictures format later in his career with a trio of picture books: The Biggest Bear (1952), which received the Caldecott Medal, Nic of the Woods (1965), and The Silver Pony (1973), which was distinguished with a Caldecott Honor and the second place selection for the Boston Globe-Horn Book Award. Throughout his successful career spanning five decades, Ward contributed illustrations to more than 100 books for children and adults.

The following synopsis and excerpt is from Ward's article "Making Pictures for a Book," published in the Instructor magazine (August 20, 1953).

When the artist first reads a manuscript for a book, a series of visual images begins to form in his mind. Since an artist thinks in images, he creates something like a "private little movie" that is projected in his head by the words from the manuscript. He then consults with the publisher to find out what kind of book they want to create and in what format, i.e. size, length, number of illustrations, whether they want color or black and white illustrations, etc. The illustrator begins to research the subject so he will be able to create an accurate portrayal. For his book The Biggest Bear, Lynd Ward went to the zoo to observe the behavior of bears, and to the Museum of Natural History to study them in greater detail. For a story on Martin Luther, he turned to the work of Albrecht Dürer and Lucas Cranach for period details and consulted books on costume, architecture and home furnishings of the period.

Once he feels he "knows" the subject, the artist can begin to plan out the illustrations on a number of pieces of paper, cut to the size specified by the publisher, making a rough layout of each page in the book from beginning to end. At this point he begins to revisit the mental pictures stored in his mind's eye since first receiving the manuscript, and making sketches of some of the most important ones, placing the pages where they belong in the sequence of the story. During this stage, he is concerned with showing the development of the main character, and planning the key pages with color illustrations and how certain colors might affect the emotional impact of the story. The final step is to work out each of the rough sketches using watercolor, ink or whatever medium seems best suited to the reproduction process selected by the publisher. In the words of the artist:

"My own method in color work is to make a fairly loose pencil drawing on the paper or illustration board, to block in the position of the main figures and background elements, and indicate the way the area is divided between the important units of the picture. Then I brush in the main colors fairly quickly so that the over-all effect is indicated in a general way right at the start. I find that this gives me not only a much better feeling about the picture from the very beginning but also enables me to change and adjust specific colors as I go along. A yellow, for example, that seems all right just on the white paper by itself, may have to be changed quite a bit if it appears later against a large area of the sky.

So, by working from large areas down to smaller, and by saving details until the last... you finally end up with a finished picture. When you have in this way finished all the pictures that were planned in that early rough form, when you have wrapped them up and sent them to the publisher, and when he, in turn, has had them reproduced, and printed in their proper places with words all neatly set in type, then you have a book. And that is what you started working for."

Checklist of the Exhibition

Idylls of the King

Unpublished illustrations for the book by Alfred, Lord Tennyson 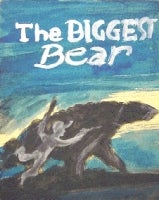 Book jacket design for the book by Lynd Ward 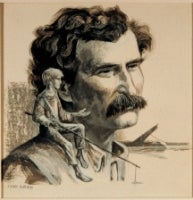 The Secret Journey of the Silver Reindeer

Book jacket designs for the book by Lee Kingman

The Secret Journey of the Silver Reindeer

Book jacket designs for the book by Lee Kingman 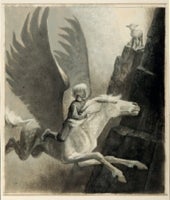 The Silver Pony: a story in pictures

Book jacket designs for the book by Lynd Ward

For Whom the Bell Tolls

For the book by Ernest Hemingway

For Whom the Bell Tolls

For the book by Ernest Hemingway 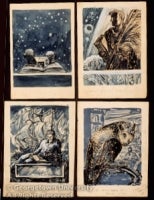 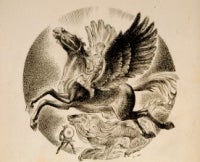 Story and Verse For Children

Unpublished illustrations for the book by Miriam Blanton Huber

For the book edited by Katherine Miller

Prince Bantam, being the adventures of Yoshitsune the brave and his faithful henchman, great Benkei of the Western Pagoda

Unpublished illustration for the book by May McNeer

Frontispiece illustration for the book by Victor Hugo

Frontispiece illustration for the book by Victor Hugo

The Man with Four Lives

Book jacket design for the book by William J. Cowen

For the book by Hildegarde Hoyt Swift 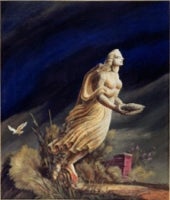 The Running of the Tide

Book jacket design for the book by Esther Forbes

Book jacket design for the book by Leonard Clark 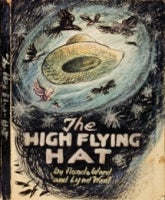 For the book by Nanda Ward 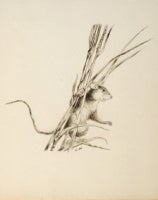 For the book by Nanda Ward

Book jacket design for the book by Joyce Collin-Smith

Title page illustration for the book by Henry Steele Commager

For the book by Henry Steele Commager 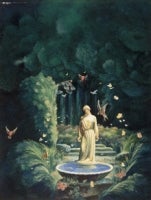 A Cup of Sky

The Curve and the Tusk

For the story by Stuart Cloete
Published in Colliers magazine (January 26, 1952)
Released in book form by Houghton Mifflin, 1952 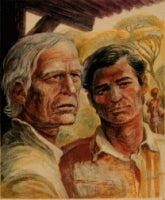 The Curve and the Tusk

For the story by Stuart Cloete Published in Colliers magazine (January 26, 1952) Released in book form by Houghton Mifflin, 1952

Book jacket design for the book by Robert Louis Stevenson

Interior illustration for the book by Robert Louis Stevenson

Frontispiece illustration for the book by Jean Fritz

The Wolf of Lamb's Lane

Book jacket design for the book by May McNeer

The Wolf of Lamb's Lane

The Master of Ballantrae

For the book by Robert Louis Stevenson

Winter 1965
Watercolor and ink on paper