An exhibition of fine prints for the opening of fall term 1992.

For more than a century America’s master printmakers have found inspiration and challenge in the vistas and environs of Manhattan.  The images they have recorded have been actively collected by the curators of great public collections and the sagacious private collector alike.  The Special Collections Division of Georgetown University’s Lauinger Library has not been untouched by their attraction and charm.

It is with a certain sense of accomplishment that Georgetown presents this exhibition, assembled from its own Manhattan-related holdings, to welcome her incoming freshmen, her returning students, and faculty for the opening of the Fall Term, 1992.

While the prints in this exhibition reach as far back as 1884 to Frank M. Gregory’s Old Trinity, Wall Street, they go on to portray the majesty of Manhattan’s bridges, skyscrapers, and commerce-filled rivers.  They also offer the viewer a glimpse into Manhattan’s environs showing us where some of her people live, as they go out on the town in search of “the latest” in an early edition of the Sunday Times, the inspiration of their churches, the diversion of an evening at the theater, and the relaxation of a summer’s night spent in strumming on a guitar, and yes, even in bringing us a blue Monday’s feeble promise of yet another week’s supply of just laundered linen hanging on the line.

The viewer will find that the majority of the forty prints in this exhibition were produced during the first half of the twentieth century by some of America’s great masters of that era, including John Taylor Arms, Earl Horter, Armin Landeck, Joseph Pennell, and Harry Sternberg.  But fourteen of them are by Frederick Mershimer, a young contemporary artist living in Brooklyn whose prints Georgetown has been collecting since first discovering his work back in 1987.

It is with much confidence that Georgetown has been adding these mezzotints of Mershimer’s to its graphic collections, and it is a pleasure to include them in this exhibition, interspersed among the prints of other masters of the twentieth century.

Frederick Mershimer, a Pennsylvania native born in 1958, received his Bachelor in Fine Arts degree from Pittsburgh’s Carnegie-Mellon University in 1980, with a major in painting.

Always interested in the problems of rendering light, naturalism and illusion, Mershimer has chosen New York architecture as the dominant theme for many of his prints.  Inspired by the city’s landmarks and its other structures of historic significance, his images are characterized by the qualities of light and space.

Having achieved national recognition for his prints, and especially his mezzotints, Frederick Mershimer is represented in numerous permanent collections, including the Smithsonian’s National Museum of American Art, Washington’s Corcoran Gallery of Art, the New York Public Library, Georgetown University’s Lauinger Library, the Museum at the University of Arizona, and the New Orleans Museum of Art.

When an artist sets out to produce a mezzotint on a copper plate, he must first prepare it by the laborious process of going over its entire surface with a special hand-held tool called a rocker.  It is a thick chisel-like steel tool with a curved and serrated cutting edge comprised of anywhere from 30 to as many as 100 teeth per inch of cutting edge.  The artist holds the tool perpendicular to the plate and, exerting pressure, rocks it from side to side.  As the tool rocks its way over the surface of the plate, its small teeth indent the copper surface and throw up with each indentation a tiny bur of metal.

When the plate is fully rocked and covered with the resulting pits and burs, it will print as a rich field of black if it is inked and passed through a press.  The plate is now ready to accept the image. The artist must now remove the black where he wants the image to appear.

Using scrapers, burnishers, and even dental tools, the artist begins to remove varying amounts of the bur.  The more he scrapes away, the less ink will be held by what remains.  If he continues to scrape and burnish down below the rocker’s indentations to arrive at a smooth surface, that area will hold no ink at all, and will print as pure white when the plate is inked, wiped and pressed into the paper of his finished print.

The mezzotint process was discovered by Ludwig von Siegan about 1640 in Holland, and from there it was soon introduced in England.  There it achieved an enormous popularity in both the production of portraits and in the reproduction of famous oil paintings, given its ability for blending tones of light and dark in the absence of the presence of lines.

But in the middle of the 19th century, with the development of newer and less difficult reproductive techniques, the mezzotint process fell into desuetude.  In more recent years, however, it has enjoyed a resurgence of interest among the more venturesome and talented contemporary fine print makers, who have successfully taken the process on to newer heights in the production of original works of art.

Items in the Exhibition:

The prints are listed alphabetically by artist and title, followed by year, medium, and edition size where known.  All of the prints are from the Georgetown University collections. 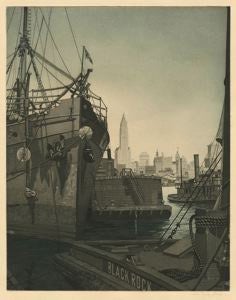 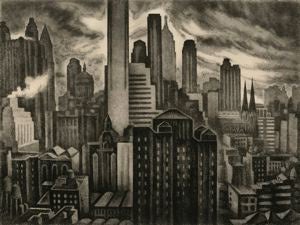 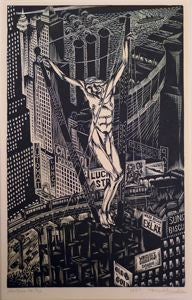 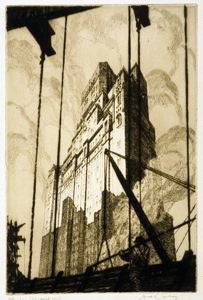 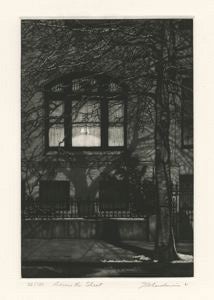 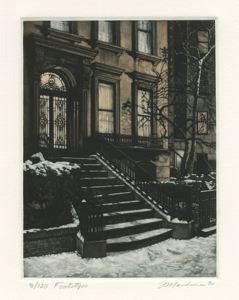 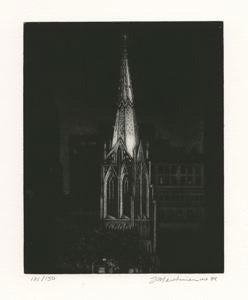 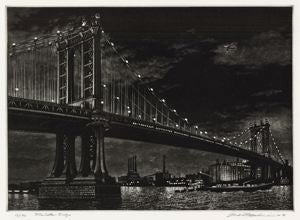 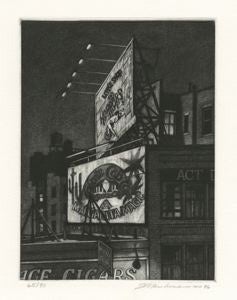 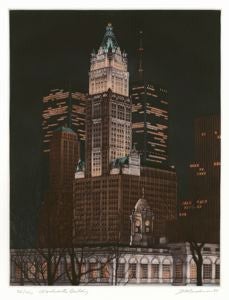 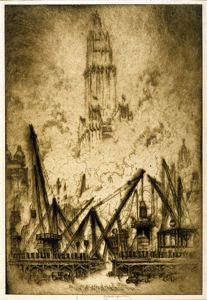 The Golden Cornice I, 1904
Etching, ed. 90 Wuerth 349
An early working proof, taken before widening the image on either side, adding foreground detail, and trimming the plate.

Times Building and 42nd Street, 1904
Etching, ed. 75?. Wuerth 342
A special impression, printed on Japon and mounted face down by the artist so that the image appears in the correct direction.  The print is thus signed on the verso. 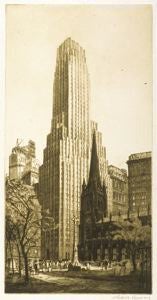 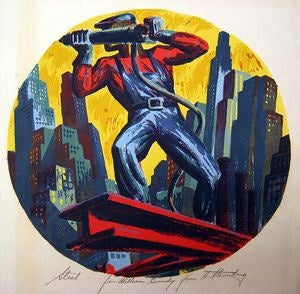 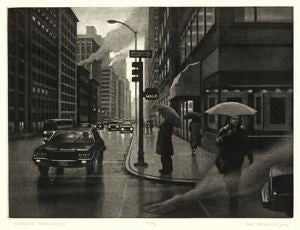 The accessioning of the Mershimer mezzotints was made possible with funds provided by the Charles M. Fairchild Memorial Endowment Fund.