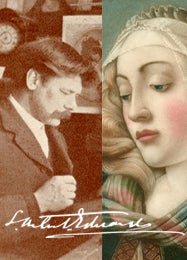 This exhibit spotlights both an artistic method and an artist too little recognized today. S. Arlent Edwards, by birth an Englishman, reinvented in his New York work the complex and time-consuming process of single-print mezzotint engraving in color. The process is unforgiving of error or impatience, but allows unsurpassed delicacy of line, color shading, and texture. It was perfectly suited to Edwards' interest in such fine aspects of old masters' work, and his attention to the details of their paintings resulted in creative reinterpretations that are far more than mere reproductions. Not only are they acts of homage, they are also original works of art in their own right.

As critic Margery Austen Ryerson put it in Art in America in 1919, "The color prints of Mr. Arlent Edwards have a mellowness of color, a soft richness like the illumination of an old Book of Hours, and his hues resemble at times those on pieces of ancient statuary found with bits of the paint still on them....He loves delicate tracery and he revels in the lace veil of some Florentine lady's headdress or the delicate designs of her jewelry and of the textile on the wall above her head. Graceful curves and spaces of rare and beautiful contour he hunts and traces with all the joy of the old master who first put them into the painting....his strength is the frail strength of a flower."

Samuel Arlent Edwards was born in 1862 in Somerset, England. He studied art and architecture at the Kensington Museum Art School from 1877 to 1881, and then continued studies in engraving with Appleton, Josey & Alais in London. He achieved early success in making mezzotint reproductions of well-known paintings, a path he was to follow all his life. In 1887, he enjoyed the distinction of having an engraving exhibited at the Royal Academy in London.

In 1890 he came to the United States and established himself in New York as a book illustrator under the name S. Arlent Edwards. He then began to work on color printing from a single mezzotint plate, an art dormant since late in the eighteenth century.

"After some years of experimenting and investigating, I believe that I have succeeded in reviving the almost obsolete art of printing in color from a mezzotint plate—done in one printing and without any retouching, as was practiced a hundred years ago by the English engravers—examples of whose works are now in such great demand. I have gone far enough in my experiments to be able to confidentially announce that all the beauties of the old printing will be retained in mine, and I can secure a depth and richness of colour that can be achieved by no other system of printing."

He abhorred the traditional practice of touching up imperfect prints by hand, and he routinely penciled in this statement just above his signature: "Engraved and printed in color at one printing without retouching." 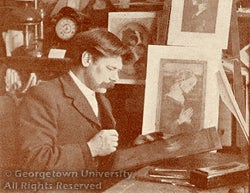 Edwards' work in New York was recognized by American and European collectors. He established a well-deserved reputation for his meticulous copies of old master paintings by such artists as Botticelli, Da Vinci, Nattier, Boucher, Gainsborough, Reynolds, and Romney. He often chose a dominating detail or image as his work's focus, however, rather than reproducing the entire painting. He also occasionally modified the colors. These changes infused his work with originality and gave a vivid sense of new life to the familiar scenes.

Edwards himself inked and printed each plate for every copy, and therefore no two prints were exactly alike. He made only a limited number of copies of each work, insisting that each be sold framed, and then he destroyed each plate. His engravings were sold to subscribers by major dealers such as D. B. Butler and M. Knoedler in New York.

In 1910 he returned to Europe, living in Bruges, Belgium, continuing to issue mezzotints from there. He remained in Bruges throughout World War I despite the German occupation. When Allied troops entered Bruges at the end of the war, he acquired instant notoriety by being the first to fly the American flag. Edwards returned to the United States in 1934, settling in Westport, Connecticut. He died there in November 1938.

Until 1642, engraving forms such as etching were limited to black lines, and gray was achieved imperfectly with fine lines and cross-hatching. In that year the German soldier Ludwig von Siegen developed the first printing process that could show tonal shading - "mezzo" or half-tints between black and white. Prince Rupert of the Rhine, a nephew of Charles I of England, brought von Siegel's process to England after the monarchist restoration in 1660, and mezzotint portraits of the notable and notorious became popular and cheap over the next century. With the gradual addition of color technique, the method was particularly good for portraits of the English aristocracy in their satins and velvets against misty romantic landscapes, and its use peaked in the late 1700s.

A mezzotint requires an intricate and time-consuming four-stage process. Mistakes are not easily corrected, if they can be corrected at all. Each copper plate could originally produce only about fifty successful prints without blurring or loss of clarity. The technique gradually fell into disuse in part for these reasons, and also because several new methods of reproduction arrived: lithography, wood engraving, and finally photography. Electroplating, developed in the 1850s, allowed many more mezzotint impressions from each plate.

1. Preparation of the copper plate: 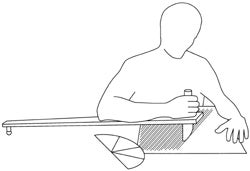 The surface is uniformly roughened to the texture of fine sandpaper with a tool called a "rocker," a chisel with a curved blade serrated with fifty to one-hundred tiny teeth per inch. The rocker is slowly, gradually and steadily worked across the entire plate in one direction and then again in another direction, sixty to eighty times or more in all. The rocking creates an extremely fine "burr" surface of tiny troughs and peaks that will hold the ink for transfer to paper. Edwards would usually take up to three weeks to prepare his plates in this manner.

2. Creation of a picture on the plate: The engraver must engrave a mirror-image of the print that he desires to see on paper. He will smooth away the burr of the plate for light areas and leave varying amounts of it to hold the pigment for darker areas. He uses scrapers of various sizes to remove the burr, and a burnisher to make delicate final adjustments and gradations of shading. A white brow will have no burr upon the burnished copper; dark eyes may be barely touched. The slightest error can ruin the image because there is no way to restore the burr that is removed.

3. Application of pigment to the plate: "Every proof in colours is practically an oil painting," Edwards wrote around 1900. "When the plate is engraved and ready to be printed, the coloured inks - which are specially ground and mixed with thick oil and varnish - are rubbed on the plate in a thick mass and then wiped off the surface, the fine indentation of the mezzotint leaving a place for the colours to lie. Each colour has to be put on and rubbed separately." To color tiny areas such as the iris of the eye, Edwards would often use a match stick.

4. Printing: "After the ink is put on and the plate wiped and manipulated in a manner which blends the colours together, so that there is no ink left except in the engraved work, the proof-paper is then laid on the plate and is passed through a heavy copper-plate hand-press, the paper being thus pressed into the engraved work in the plate and taking up the ink, and so making the finished proof."

"The same process has to be gone over for each proof, and consequently it necessitates a great amount of labour and experience, but the end justifies the means, for these engravings possess a richness of colour which can be achieved by no other process."

Jester with a Lute

Girl With a Pearl Earring

Portrait of an Old Woman Plucking a Fowl, "Rembrandt's Mother"

A Visit to the Boarding School

Portrait of a Woman, "Lucrezia Tuornaboni"

Portrait of a Woman, "Elvira"

Portrait of a Woman

Head of the Madonna

Detail of Virgin and Child with Saint John the Baptist and an Angel
Original painting c. 1490, by Botticelli workshop
National Gallery, London
K 34; B 12

Copper Plate: Head of the Madonna

Head of the Madonna

Georgetown University Library is very pleased to present this exhibition, thanks to a generous donation of twenty-six S. Arlent Edwards mezzotints from the artist's son, Sam A. Edwards. We are also grateful to Helena E. Wright, Curator of Graphic Arts at the Smithsonian Institution's National Museum of American History, for her gracious support in arranging a loan of the artist's printmaking tools. The NMAH holds a master set of Edwards' prints; there are also substantial holdings of his work at the Library of Congress and the New York Public Library, and in selected U.S. museums.

Illustrations: S. Arlent Edwards in his New York studio, from the D. B. Butler catalog of Edwards' prints, c. 1908. Demonstration of preparing the copper plate with a "rocker," a chisel used to roughen the surface so that it will hold ink for transfer to the paper.