Born the sixth of seven children in Warsaw, Poland, in 1904, Philip Reisman was the son of Max Reisman and Helen Zeidler Reisman. He was four years old when the family moved to New York.

The Reismans settled in a tenement on New York's Lower East Side. Reisman recalls seeing an older brother practicing “perspective" for an art correspondence course. At age ten Philip had decided on art as a career. His father was extremely upset by Philip's decision and urged him to consider a more practical trade. "Why don't you become a machinist and paint part-time?"

Starting with an art class in Brooklyn at the Manual Training High School, Reisman became bored quickly. As a teenager he ventured into the Art Students League and was well satisfied by the unstructured format. He studied art by day and did various jobs by night to support himself. He worked as a soda jerk and later as a waiter at Gertner's Restaurant. Soda Fountain (No. 41) and Restaurant (No. 39) depict, from memory, those places. Paying twenty-five cents per hour and all he could eat, these jobs served their purpose, but not without hard work. "I worked hard. It was hard, physical work. I was always walking, walking, walking. I was a fast soda jerker. And when I got hungry, I'd mix myself a shake. I'd put in syrup and a huge scoop of ice cream, a big handful of chopped nuts, and two raw eggs. That's how I existed." At the Art Students League Reisman learned composition and illustration from the respected illustrator Wallace Morgan and anatomy from George Bridgman. He was also influenced by George Luks, another League teacher. Later, Reisman studied graphics privately with Harry Wickey.

Wickey became a personal friend of Reisman. "He came to my studio for years as a friend, and I learned not only about etching but also the history of art. Wickey introduced me to Rembrandt, Durer, and the great French painters of the nineteenth century. He opened my eyes." Harry Wickey was "a real human being," recalls Reisman. "He wouldn't take a dime. The kind of guy who would invite you over to dinner, then read you Dickens. He was a humanist .... I'll never forget him."

Reisman later taught etching to Philip Evergood in 1923. Reisman constructed an etching press out of an old colander machine that he bought secondhand along Sixth Avenue for five or ten dollars. "I did what I had to do to become a functioning printmaker.”

Reisman produced sixty-two etchings in the short period of time between 1927 and 1931. Reisman's prints consist primarily of two major themes: New York scenes of the 1920s and 1930s, when he was young, and biblical subjects of the Old Testament.

The New York prints capture the daily routine-a vendor selling fruit, a group of construction workers engaged in the pre-Depression building boom of the city. His depictions of everyday life capture a visual history of New York because they reflect the raw and powerful activity of the day. "Artists have a responsibility to express the texture of their time and that's what I have been trying to do." Reisman seldom worked from preliminary drawings for his prints. He preferred going from a rough sketch directly to the plate to keep his subjects spontaneous and alive.

Reisman successfully captured the human condition, giving us a glimpse of the poetry of ordinary life. All his scenes are familiar to us in some way: a trip to the beach or the butcher, a woman giving herself a home pedicure, a Passover Seder. His prints have concealed elements that we find over time. These surprises include a hidden man or dog; a Reisman initial; a signature in clever, obscure places. The Knife Grinder (No. 25) has his name carefully placed in a shop sign. A boy's scooter in print Sunday Stroll (No. 44), and The Veterans (No. 56) hold his signature. The keystone of Builders I (No. 53) is initialed and dated 1928.

Reisman began painting in 1929. He was intrigued by composition with figures in motion. His subjects are never static—they are always in motion. In 1936 he was among a group of ten artists to be commissioned by the Work Projects Administration (WPA) to paint a series of murals for the new psychiatric building at Bellevue Hospital in New York City. The mural, painted in egg tempera, depicted various American industrial scenes and showed a productive, hopeful portrayal of life. Reisman's other paintings of the period depict the homeless and the downtrodden. "I do not see any romance or poetic sentiment in this very harsh economic system," he said. "I have tried to paint things as they are, and I am dissatisfied with things as they are." Reisman adhered to this strong social context throughout his painting career, unlike many of his contemporaries who moved into abstraction or landscapes when the market for lighter subjects dominated the art scene.

Reisman was drawn to the ordinary man on the street, the fishermen of Gloucester, the seedy bars, the hungry, the prostitutes. Later he chronicled the '60s, '70s, and '80s drug culture, the hippies and the punks at a time when pop art was the rage. Geometric patterns didn't interest Reisman: people ignited him. His paintings are chronicled in a 1986 book entitled Philip Reisman—People Are His Passion by Martin H. Bush. Reisman's work—graphics and paintings—has enjoyed a long, consistent, and varied exhibition history and is represented in many major collections. The recent revival of interest in American art of the 1930s has heightened the interest in Reisman. Many current economic conditions parallel those of the '30s, making his works more poignant than ever.

Note: The "R" number and page number citations for the prints in this exhibition refer to their listings and illustrations as found in the Reisman Catalogue Raisonné published in 1992 by George D. Bianco, Bedford Press, Box 441, Bedford, NY, 10506. 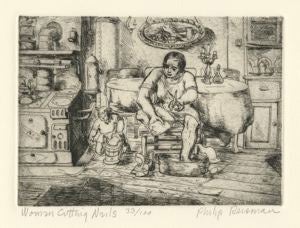 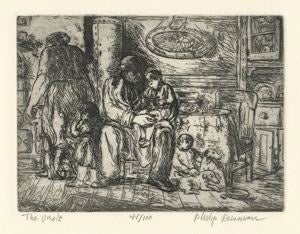 At Home: The Family Circle

At Home: A Few Friends 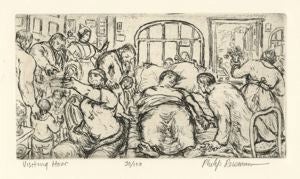 About Town: Part I 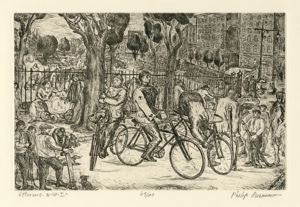 56 – Veterans, 1931 (R. 59, p.18) [Here Reisman records with all its pathos one of those not uncommon spectacles in those earlier days “before proper veterans’ benefits, (of) WWI vets entertaining for coins,” as he expressed it in a 1991 interview.]

[Reisman was commissioned by Random House to do 16 watercolors and 62 ink drawings as illustrations for the two-volume 1939 publication of this work. Exhibited here, together with a copy of the publication, are four of the 62 original ink drawings appearing in the two books. He illustrated yet another of the Russian classics, Feodor Dostoevsky's Crime and Punishment, published in 1944 by the Modern Library.]

Paintings: In the Georgetown Collections

Georgetown University’s students, faculty and friends are grateful to Mrs. Louise K. Reisman, without whose kindness and generosity this exhibition of her late husband’s art would not have been possible.