The Prints of William E.C. Morgan (1905-1979): A Retrospective of his Drypoints, Engravings, and Etchings in the Georgetown Collection

This retrospective of the graphic work of William E. C. Morgan is presented by Georgetown University in order to promote knowledge and appreciation of a not-to-be-forgotten British printmaker of the years between the two World Wars. This catalogue provides a self-guided tour of the exhibition: The text intertwines a biographical sketch of Morgan's life with a retrospective of the prints he produced in four time frames which spanned his printmaking career:

- An Eye on the Prize: his student days in London's Slade School as he pursued and won the Prix de Rome scholarship in wood engraving to the British School of Fine Arts in Rome.

- The Prix de Rome Scholar: his artisitic growth in Rome during the years 1924-27, culminating in his creation of the line engraving "The Source," which won for him the Logan Medal at the Art Institute of Chicago's international print exhibition in 1928.

- The Rewards of Success: the years of acclaim accorded him after his return to England, the growing demand for his prints in both London and Chicago, and the reproduction of four of his works in Fine Prints of the Year for the years 1928 through 1931.

- The Argyll Years: his final years of printmaking in Scotland where he sought escape from the ravages of the great depression before growing problems with his eyesight brought an end to his printmaking career in 1938.

In his book British Etchers: 1850-1940, Kenneth M. Guichard described William Evan Charles Morgan as a "London engraver and drypointer of distinction." Commenting that "barely a dozen titles" of Morgan's work were traceable, he added that "it is scarcely a tribute to such a distinguished artist that so little has been recorded about him."

Georgetown University held seven of those titles when Guichard published his book in 1977. Its curator took those observations as a challenge to locate more of Morgan's prints and discover more about his artistic career. Over the intervening years, Georgetown's holdings have grown to forty-nine prints (including five bookplates) out of a total of fifty-one titles now known to exist.

Morgan was born in London on October 19, 1903, the only child of William H. Morgan and his wife Emily. On completing his early schooling at St. Dunstan's, he enrolled at age seventeen at the Camberwell School of Art, transferring two years later in the fall of 1922 to London University's Slade School in order to study under its noted Professor Henry Tonks.

In the fall of 1923, impressed by Morgan's talents, Tonks encouraged him to try for the Prix de Rome competition. The experience, he thought, would do him good. Surviving the cuts of early 1924, Morgan was one of the four finalists along with Edward Bouverie-Hoyton and Graham Sutherland. He went on to win the competition with his wood engraving titled The Expulsion, taking the prestigious Prix de Rome Medal and the three-year scholarship to the British School in Rome. Thus began his career in printmaking, which spanned the years 1924 to 1938.

This exhibition begins at Wall Case # 1 with the following prints and related materials from Morgan's Slade School days:

Other:
His Prix de Rome Medal, 1924
His Slade School Certificate for 1922-23
A Collection of His Engraving Tools 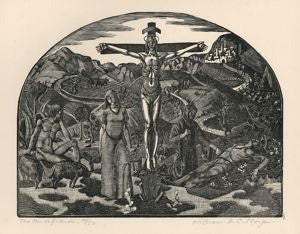 Rome and the British School brought Morgan's printmaking skills to full maturity. Finding inspiration in sketching trips into the Abruzzi hill country and in studying the prints of Albrecht Durer, Morgan created a group of remarkable rural landscapes and renderings of the human form. He also came to realize that his artistic vision was best expressed in line engraving on copper.

In October of his final year, his friend Geoffrey Wedgwood urged him to send three of his line engravings to Bertha Jaques, the executive secretary of The Chicago Society of Etchers, for consideration in their upcoming International Exhibition of Etchings at the Art Institute of Chicago. In his covering letter of October 23, 1927, he told Ms. Jaques that the prints were "for your approval ... thinking that you might be interested in my work."

The exhibition continues at Wall Case #s 2 and 3 with the following prints from his work at The British School in Rome: 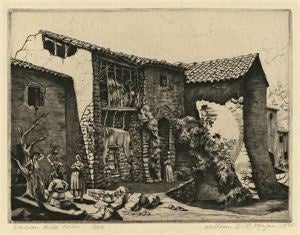 Ms. Jaques was much impressed with Morgan's print The Source, a striking Amazonian nude, spear in hand, standing guard over a tiny spring bubbling up out of its primeval source. So were the judges. They awarded him the Art Institute of Chicago's Logan Medal and its first-purchase prize.

Morgan, now back in England, learned of his award from Ms. Jaques in a letter dated February 2, 1928. She went on to ask him to "send (her) duplicates of your prints (including) The Source as no doubt other copies will be wanted." Possibly in response to that request, Morgan busied himself in transferring three more of his Italian sketches to the copper plate: Italian Cottage, Italian Hill Farm, and Italian Hill Town, all done in drypoint.

Then came the article, "The Engravings of William E. C. Morgan," by the noted British art critic Malcolm Salaman in the May 1928 issue of The Studio in London, and in its New York counterpart, Creative Art. Illustrating it with four of Morgan's British School line engravings, the author went on to extol the qualities of the young artist's achievement in both technique and invention.

Morgan's initial acclaim on returning from Rome continued to grow. His Nymphs Bathing was reproduced in Fine Prints of the Year: 1928, followed by Perseus in 1929, The Brook in 1930, and The Waterfall in 1931.

Morgan's prints were now in considerable demand. Galleries in London and Chicago were showing them. The Chicago Society of Etchers granted him active membership. The American collector Lessing J. Rosenwald purchased nine of his prints, now part of the great Rosenwald Collection in Washington's National Gallery of Art. And in London, The British Museum, which holds nineteen of Morgan's prints, had already acquired ten of them by 1932.

The exhibition continues at Wall Case #s 4 and 5 with the prints from these "Rewards of Success" years:

The Logan Prize:
The medal and its prize print, The Source - G.36

But the fine-print markets soon collapsed in the wake of the great depression. Married now and agonizing over his growing financial straits with a wife and small daughter to support, Morgan finally accepted the offer of a residence on a patron's Argyll estate in Scotland in the Spring of 1932 to wait out the depression. There he absorbed himself in teaching, doing a bit of painting, and exploring the rugged Scottish countryside. But, devastated by the state of the print markets, he could not bring himself to return to printmaking.

In 1935, however, Morgan's interests in etching seemed to revive. He wrote to Ms. Jaques that he was beginning to work on "a few ideas in biting ... carrying out various experiments in search of more varied qualities." In March his printer David Strang had pulled his large etching (248x383 mm.) Cloudburst Chaos in a Highland Burn, and he immediately dispatched a copy to Ms. Jaques in Chicago.

In April, Morgan completed Kinlock Aline Castle, an even larger etching (291x395 mm.), writing to Ms. Jaques that "the needling took me over three weeks, so you may imagine that I was glad to be etching and not engraving."

Morgan pulled his last prints in the Spring of 1938 - two wood engravings of a black cock, and two excellent line engravings, one Hind & Calf and the other Stag Calf. The close work, however, was now taking its toll on his eyesight, forcing him to the realization that his printmaking days were over.

The exhibition continues at Wall Case #6 with the following prints from his Argyll years:

By September 1938, Morgan had returned to England with a faculty appointment at The Harrow School of Art. But the winds of war were soon to intervene. His World War II years were spent as a camouflage officer, followed by a career in public service with the British Rural Industries Bureau. He retired in 1968. Wishing to be near his daughter and grandchildren, Morgan and his wife took up residence in Switzerland, where he devoted his last years to his family and his painting. He died there in 1979.

The exhibition concludes with the three table cases. Here are to be found Morgan's five known bookplates, his preliminary sketch and two working proofs for Perseus (considered by many to be his masterpiece), a reproduction of his largest print Kinloch Aline Castle, and other related materials.

Examples of Morgan's graphic work may be found in a number of public collections, including London's British Museum, Oxford's Ashmolean Museum, Washington's National Gallery of Art, and Georgetown University's Lauinger Library, where his Prix de Rome and Logan medals, his engraving tools, and all but two of his known prints are preserved in its permanent collections.