An exhibition of fine prints for the opening of the fall term, 1985.

In Rural America Revisited, the University’s fourth annual exhibition of American Fine Prints of the Twentieth Century, Georgetown offers its students, faculty and friends a unique opportunity to examine first-hand one third of the total graphic oeuvre of the three giants of American realism of a half century ago—Thomas Hart Benton, John Steuart Curry, and Grant Wood.

Although each of these artists developed his own unrelated artistic style and technique, the Eastern art establishment of the 1930’s denominated their work as “Regionalist.” And America’s depression-weary public liked what they saw—an escape into Regionalism’s nostalgic and often idealistic recreation of a rural America, presented for the most part devoid of the political and social turmoils of the day and the ravaging effects of the great depression.

Confronted by the collapse of the country’s industrial, commercial, and financial foundations of the 1920’s, many Americans found solace, inspiration, and renewed hope in looking back to the perceived roots of their nation’s democratic spirit and dynamism in the rural setting of America’s middle west.  With Time magazine’s enthusiastic review of December 24, 1934, Regionalism’s vogue was assured.

But its championed practitioners, Benton, Curry, and Wood, felt a certain unease with the term, questioning both the precision of its meaning and its validity as an emerging category into which the scholars and critics were attempting to place their art.

As Benton expressed it in his University of Kansas City Review article of 1951 entitled “American Regionalism: A Personal History of the Movement,”

Wood, Curry, and I thought of ourselves simply as American or Americanist painters, sectional at one moment, national and historical at others.  If we dealt largely with “agrarian” subjects, it was because these were significant parts of our total American experience….

However, the milk was spilt.  Regionalists we became and the victims thereby of a lot of odd and inaccurate definitions which the word suggested.  “Regional” and “provincial” were made synonymous for our cases….

Otherwise put, we were bent on returning painting to its historic representational purpose and, further, in the interests of an American art, to making it represent matter drawn from American life and meaningful to those living that life.

How well Benton, Curry and Wood succeeded is for our viewers to ponder.  Although Regionalism as a movement has been long since gone, its accomplishments are enshrined in collections such as Georgetown’s from which forty-eight of this exhibition’s fifty prints were culled, and in the art history texts of our classrooms.

Georgetown takes special pleasure in presenting this exhibition of a rural America of a half century ago.  For indeed, one of its artists, the young Tom Benton, a congressman’s son from Missouri, received his first training in art within sight of the University’s Healy Tower at our neighboring institution, Western High School in Georgetown, now the home of Washington’s Duke Ellington School of the Arts.

Catalogue of the Exhibition

The prints in this list, all lithographs, are arranged as they appeared in the six wall cases and four table cases.  As one moved along the wall, the prints told a “story without words” of a family’s imaginary return to the rural America of a half century ago with the three great regionalist printmakers serving as hosts.  The prints in the table cases add a few sidelights of interest in things seen and experienced during the visit. 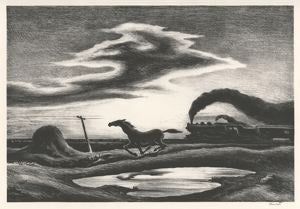 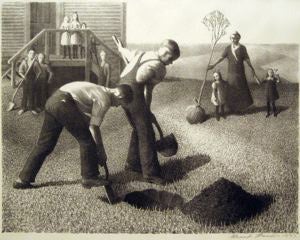 A Hand With the Chores – Thomas Hart Benton 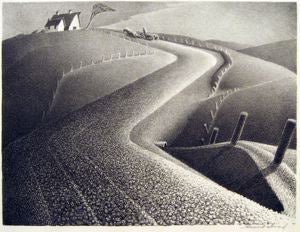 Fruits of the Field – Grant Wood 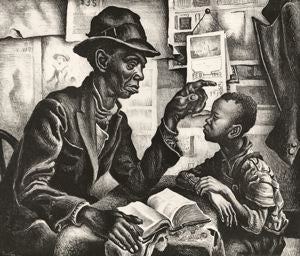 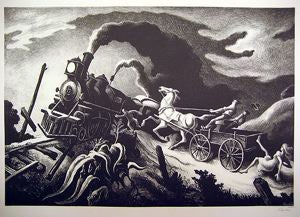