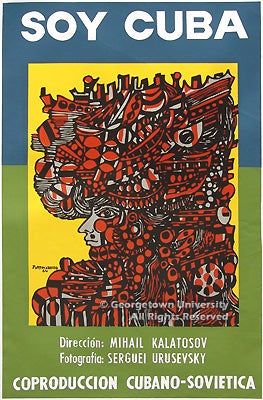 The exhibition Screening Prints: Fifty Years of Cuban Cinema Posters, 1959 – 2009 marks the 50th anniversary of the Cuban Revolution and the creation of the Cuban Institute of Art and Film Industry (Instituto Cubano de Arte e Industria Cinematográficos), or ICAIC. Founded in March, 1959 (just 83 days following the revolution) the ICAIC was one of the first institutions implemented by the new Cuban government. One of the main instruments of the Institute, the Cuban film poster was a means of promoting the work of native artists who immortalized historic films and figures in their bold and colorful designs.

Cuba’s far-reaching cultural exchanges with the world produced a unique style of silkscreen poster used to publicize widely varying activities such as health and education campaigns, historic commemoration, concerts, performances, exhibitions, rallies, and of course, movies. The exhibition is subdivided into four sections: films made in Cuba; foreign films; film festivals; and heroes and characters.

Stylistically, Cuban cinema posters combine elements of photography and photomontage with Abstract Expressionist and Pop tendencies. Works by noteworthy artists such as Eduardo Muñoz Bachs (1937-2001), Antonio (Ñiko) Marino, and Antonio Fernández Reboiro (both born 1935) focus on the essence or central character of a particular film, translating them into popular visual icons. The results are strikingly beautiful and highly original works of art that reflect the interplay of state discourse and the cultural subconscious in revolutionary Cuba.

The exhibition at Lauinger highlights approximately 25 from the Library’s collection of 322 Cuban film posters recently purchased from German poster collector Thomas Hill. Our aim is to explore the Cuban cinematic experience and corresponding silkscreen poster in order to present the artistic range of this ubiquitous medium in the production of Cuban visual culture after the revolution.

Some of the most influential Cuban films were made during the first decade of the ICAIC, usually referred to as the Golden Period of Cuban Film. Feature films included the co-production Soy Cuba (I Am Cuba, 1964) by Mijaíl Kalatazov, Memorias del subdesarrollo (Memories of Underdevelopment, 1968) by Tomás Gutiérrez Alea (aka Titón), and Lucía (1968) by Humberto Solás. These are considered among the most important titles in Latin American film history.

Although the seventies was a difficult time both politically and artistically in Cuba, some movies such as Los días del agua (Days of Water, 1971) and Retrato de Teresa (Portrait of Teresa, 1979) received critical acclaim. By the end of the decade the International Film Festival in Havana was introduced, bringing new life to the struggling Cuban film industry.

The following decade Humberto Solás’s Un hombre de éxito (A Successful Man, 1986) became the second Cuban film submitted to the Academy of Motion Picture Arts and Sciences as a candidate for Best Foreign Film. Other noteworthy movies of the 1980s included Papeles secundarios (Supporting Roles, 1989) and La bella del Alhambra (The Beauty of the Alhambra, 1989), the latter of which won a Goya Award in Spain.

I Am Cuba, directed by Mikhail Kalatozov (1964)

Synopsis: The film is divided into three episodes that describe the lives of three Cuban women, each of whom is named Lucía (played by Raquel Revuelta, Eslinda Núñez, and Adela Legrá). The three Lucías also depict three historical periods: the struggle for Cuba’s independence from Spain in 1895; the so-called revolution of the 1930s, and the 1959 Cuban Revolution. Lucía was the ICAIC’s most expensive production to date, and represented a total success. Original, exuberant, and innovative, it was an experimental film which soon became a classic and now is considered a milestone not only in Cuban cinematography but also in Latin American Film History.

Synopsis: An intellectual leaves the Cuban revolution and “underdevelopment” behind, only to find himself at odds with the ambiguities of his new life in the “developed” world. Tomás Gutiérrez Alea (also known as “Titón,” 1928 – 1996) wrote and directed more than 20 feature films, documentaries, and short films. Some of Gutiérrez Alea’s most relevant work is part of the cinematic movement of the 1960s and 70s known as the New Latin American Cinema or Third Cinema, also represented by directors such as Brazilian Glauber Rocha and films such as La hora de los hornos (Hour of the Furnaces, 1968). These films were concerned largely with the problems of neo-colonialism and cultural identity. In his last years, Titón co-directed with Juan Carlos Tabío internationally acclaimed films such Fresa y Chocolate (see below).

Synopsis: In 1830s Havana, amidst the Cuban independence movement, social climber Cecilia uses Santería to conquer the son of a rich colonialist family. Now a classic, Cecilia by Humberto Solás generated great controversy when it was released due to its free adaptation of Cirilo Villaverde’s 19th century novel Cecilia Valdés.

Synopsis: A vampire family in Cuba prepares for a showdown between vampire cartels in the USA and Eastern Europe. They want control of a vaccination that enables them to live in daylight. Animation has been a popular genre of Cuban cinema in the past decades. Two of its greatest successes were created by Juan Padrón. In 1974 he created Elpido Valdés (see below) and he also directed the full-length Vampiros en la Habana in 1985.

The Beauty of the Alhambra, directed by Enrique Pineda Barnet (1989)

Synopsis: An allegory of the Cuban republic is told through the story of a musical theatre star in Havana of the 1920s and 30s.

The Elephant and the Bicycle, directed by Juan Carlos Tabío (1994)

Synopsis: After two years in jail, in 1925 a man returns to the island of La Fe, ruled by the dictator Francisco Gavilán. He arrives with a movie projector and shows Robin Hood to the people. The next day the bridge that communicates La Fe to the mainland is destroyed, and the people plan to overthrow Gavilán. The title refers to a scene in which children argue over the shape of a cloud in the sky: is it an elephant or a bicycle?

Synopsis: An elder samurai warrior, instead of committing seppuku (ritual suicide, better known in the West by the colloquial term harakiri) after his lord was deposed, was ordered to stay alive. Reboiro’s poster for Harakiri won a prize in the International Film Poster Competition organized by The Cinema Sixteen Society of Ceylon (Cambodia) in 1965. Its forceful and simple design, a jagged red cross, suggests the violent nature of the film without being explicit.

Synopsis: A peasant goes to reclaim his stolen bull and is killed by the landowner, who organized the theft. Based on real events, the film analyzes the relationships between a group of guerrillas, a political avant-garde and the peasants in a specific area of the Andes. Jatun auka is Quechua for the principal enemy.

Whatever Happened to Baby Jane?, directed by Robert Aldrich (1962)

Synopsis: Two aging film actresses live as virtual recluses in an old Hollywood mansion. Jane Hudson, a successful child star, cares for her crippled sister Blanche, whose career in later years eclipsed that of Jane. Now the two live together, their relationship affected by simmering subconscious thoughts of mutual envy, hate and revenge.

Synopsis: A journalist involved in a political affair is chased by two strangers who beat him and snatch away the files and papers he was carrying for a minister of state. Near to death, he has recollections of his past life and the women he loved. La vida provisoria is a Brazilian film whose Cuban poster is noteworthy due to its graphic inspiration, Guernica (1937) by Pablo Picasso (1881 – 1973). The fleeting nature of life is expressed in this poster that visually echoes the suffering lives cut short by the Spanish Civil War.

Synopsis: A serial killer is murdering London women with a necktie. The police have a suspect… but he’s the wrong man.

Synopsis: Disturbed eight-year-old Ana lives in Madrid with her two sisters and mourns the death of her mother, whom she conjures as a ghost. The film subtly evokes both the complex feelings of childhood and the struggles of a nation emerging from the shadows.

Synopsis: Father Suryn has been sent to investigate a case of demonic possession at a nearby convent after a local priest was burnt for sexually tempting the nuns. He meets the abbess, Mother Joan, said to be the most possessed of all the nuns. Father Suryn will have to go to hell and back to save Joan, casting himself forever into darkness for her salvation.

The Festival Internacional de Cine Latinoamericano (International Festival of the New Latin American Cinema) is one the most important events of its type in Latin America and has been celebrated each year in Havana since 1979. The International School of Cinema, Television and Video of San Antonio de los Baños was founded in 1985 and is supported by the Fundación del Nuevo Cine Latinoamericano; its president is Gabriel García Márquez. There, hundreds of young students from all over Latin America have studied direction, script, photography and editing. This poster is significant due to the event’s prominence as well as the renown of the late Chilean artist Roberto Matta, a leading Surrealist painter and printmaker recognized throughout Europe and America.

In Memory of Marilyn Monroe

Synopsis: Cuban prima ballerina assoluta and choreographer Alicia Alonso (b. 1920) prepares for a performance. Alonso has been the subject of several Cuban documentaries at different stages of her professional career. She was the founding director of the Ballet Nacional de Cuba and the mentor of a generation of international ballet stars.

Elpidio Valdés and the Rifle, directed by Juan Padrón (1979)

Synopsis: Elpidio Valdés tells the story of a mambí who wins a modern rifle thanks to his shooting skill with his old gun. Elpidio Valdés, created by animator Juan Padrón in 1974, is the revolutionary Cuban answer to American comic books and animated movies. The hero is a mambí (independence war soldier) who fights against the Spanish colonial rulers at the end of the 19th century. This character and those around him show the values that the new revolution should embrace such as courage and faith in the revolutionary process.

Synopsis: Harry Villegas, Leonardo Tamayo and Daniel Alarcón, the only survivors of Che’s guerilla band in Bolivia, talk about preparations for their last battle in October 1967. The figure of Che appears in most aspects of Cuban daily life, from state-sponsored murals to the local currency, signifying that the revolution lives on.

Pages from the Diary of José Martí, directed by José Massip (1972)

Synopsis: Passages from the field diary of José Martí, Cuban intellectual and organizer of the War of Independence José Martí (1853 – 1895), known as the apostle of liberty, is considered the founding father of the Cuban nation. He died young during one of his first battles for Cuban independence. He is also known as one of the most influential poets and writers of the 19th century. This film mixes documentary with dramatization of some passages of his short-lived military field diary.

Fidel Demands that Cuba be Respected

Born in 1937 in Valencia (Spain), Eduardo Muñoz Bachs came to Cuba with his parents in 1941. He made his first poster (Historias de la revolución) for the ICAIC in 1960 with no formal art training; thus began a lifelong association. Member of the UNEAC, designer, drawer, illustrator and painter Bachs made over 2,000 movie posters for the ICAIC. He also received wide international acclaim and won awards in many countries, including three prizes from the Cannes Film Festival. Bachs’s legacy continues to inspire artists everywhere. In October 2007 the National Museum of Fine Arts in Havana featured a comprehensive selection of his work. He is considered the most significant artist of Cuban film posters.