Such a Plan of Education . . . . deserves public Encouragement: John Carroll's Proposals for Georgetown

In the spring of 1787, Father John Carroll circulated his Proposals for a school he intended to open in Georgetown, Maryland. By doing so, he hoped to generate both interest and financial support. He used the document to lay out his goals for the school, the subjects which would be taught, the types of students who would be able to enroll, and the reasons he selected Georgetown as the location.

This exhibition highlights key aspects of the Proposals For Establishing an Academy, at George-Town, Potowmack-River, Maryland. 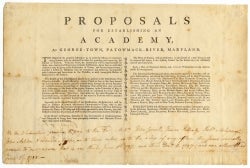 Proposals For Establishing an Academy, at George-Town, Potowmack-River, Maryland, circa 1787

Note the creative spelling of Potomac and the hyphenation of Georgetown (the spelling of proper names did not fully standardize until the end of the 19th century) and the fact that the document locates Georgetown in Maryland. The District of Columbia was not incorporated until 1802; before that Georgetown (the place and the school) was part of Maryland. This location is repeated on the University seal which was designed in the 1790s.The seal includes the Latin phrase: Collegium Georgiopolitanum Ad Ripas Potomaci in Marylandia which translates to Georgetown College on the banks of the Potomac in Maryland.

Carroll’s vision for what Georgetown College could and should be is summarized in the first line: the object of the proposed institution is, to unite the means of communicating science with an effectual provision for guarding and improving the morals of youth. This opening articulates two goals. The first is to communicate science and from other passages in the Proposals, it is evident that this word carries a much broader meaning than it does today and equates to the concept of knowledge acquired by study. The second goal is to improve morals.

An understanding of the connection and interplay between these two goals is required to fully understand Carroll’s motivations. Georgetown is the oldest Catholic institution of higher education in the U.S. Before the Revolution, there were laws, not always enforced, preventing Catholics from voting, holding office, worshiping publicly or operating schools. At one point, it was even illegal for Catholics to send their children to Europe to be educated in Catholic schools there. But independence changed everything and allowed Carroll to move forward with his long-held desire to found a school. He was looking to educate Catholic boys, although the fact that the student body would be exclusively male is not specified - it did not need to be; that was simply a given. Carroll also wanted to mold them into good citizens and prepare them to play an active role in shaping the young republic, hence the references to improving the morals and the Cultivation of Virtue.

The Proposals contain multiple examples of words printed with a long or medial s, which resembles the letter f on first inspection. The first line alone contains three examples, in the words proposed, institution, and provision. The long s began to disappear from typefaces in the mid-1790s.

This paragraph states the original admission requirement for Georgetown College, singular: students had to have learned the first Elements of Letters, meaning they simply needed some basic reading ability. As a result, children as young as six enrolled. Carroll later reworked the admission policy and introduced an age requirement: students had to be at least eight years old. It was not until 1870 that another change was made to this policy and students were required to be twelve before they could enroll. Younger students remained on campus until 1919 when what was by then called Georgetown College Preparatory School moved to the site it still occupies in Garrett Park, Maryland. The intention to admit younger students explains the inclusion of the three Rs (reading, writing and arithmetic) in the curriculum described in this paragraph, alongside the study of English grammar and the Learned Languages (Greek and Latin.)

Father Carroll hoped his school would create a pool of educated candidates for the priesthood. But it was never his intention that Georgetown be an exclusively Catholic school; in fact, the word Catholic does not appear anywhere in the document. And the third paragraph contains an unambiguous statement about the religion of those who would be accepted as students:The Seminary [which in this context is simply an older word for school] will be open to Students of Every Religious Profession. This vision of religious diversity was quickly realized when Georgetown College opened, with non-Catholics making up 20% of students in the 1790s.

Some of the Catholic schools which opened in the U.S. after Georgetown did not adopt the same admissions policy. When Holy Cross was founded in 1843, for example, it maintained an exclusively Catholic student body. As a result, the State of Massachusetts would not give it a charter and without a charter, the college was not able to award degrees. A charter was eventually granted in 1865 but Georgetown College granted degrees to Holy Cross graduates in the interim. Among them was an individual of great significance in the history of Georgetown: Patrick F. Healy. Born to an enslaved mother and an Irish immigrant father, Father Healy became Georgetown’s President in 1873 and transformed campus by building the magnificent building which today carries his name.

The fourth paragraph reveals Father Carroll’s very pragmatic approach to site selection for his school. It lists three reasons why Georgetown, at the time a town of about 1,500 and the leading tobacco port in the area, was picked over Baltimore and Philadelphia which were also considered: In the Choice of Situation, Salubrity of Air, Convenience of Communication and Cheapness of Living, have been principally consulted and George-Town offers these united Advantages. Georgetown’s hilltop was certainly seen as healthier than locations at lower elevations and the Georgetown site (next to the Potomac River and what would become the Federal City) unquestionably offered ease of access and therefore communication, but it was the cheapness of living offered by Georgetown which made it particularly attractive to John Carroll, who had very little success with his fundraising efforts.

The price of tuition will be moderate; in the course of a few years it will be reduced still lower, if the system formed for this Seminary be effectually carried into execution.

Georgetown College’s perilous financial situation after it opened ensured  that tuition was not reduced, as Father Carroll had hoped. In fact, the first printed document produced by the College was a notice that tuition would increase.

The College had been founded by former members of the Jesuit Order after the Order was suppressed by the Pope in 1773. Traditionally, the Jesuits did not charge tuition in their schools. However, Georgetown College continued charging tuition even after the Order was restored in 1814. It was not until 1827 when an explicit ruling was made by the Order’s Superior General in Rome that Georgetown stopped charging tuition. Students were still charged for board and lodging. In 1833, after a formal request for dispensation from the ban on tuition was granted by Rome, the College again was able to collect tuition payments.

The last two paragraphs of the Proposals list the individuals in Maryland, Pennsylvania, Virginia, and New York who would accept donations. Included in the list of names of Directors of the Undertaking given in paragraph eight are two future Georgetown Presidents, Robert Molyneux and Leonard Neale. Father Molyneux was Georgetown College President from 1793 to 1796 and again from 1806 to 1808; Leonard Neale, who would succeed John Carroll as Archbishop of Baltimore in 1815, served as President from 1798 to 1806.

The handwritten note at the bottom of this copy of the Proposals reads: We the subscribers promise to pay to the Reverend Messrs John Carroll, James Pellentz, Robert Molyneux, John Ashton and Leonard Neale, or to their order, or to the order of any of them the sums severally annexed to our names; that is one third, June 1st 1787; one third December 1 1787; and one other third June 1st 1788.

This wording anticipates that donors (subscribers) would pay in three installments made at six months intervals, rather than in one lump sum.

The University Archives has two copies of the Proposals and written on the back of one by an anonymous commentator is the phrase: Prospectus for building The College of G. T.  Useless.

This very succinctly sums up Father Carroll's lack of fundraising success. John Gilmary Shea notes in his History of Georgetown College published in 1891 that the responses to the appeal [in the Proposals] were not so generous or so numerous as to give much encouragement to Dr. Carroll or those who had at heart the erection of the Catholic seat of learning. The Sacred Congregation, “de Propaganda Fide,” contributed three annual payments of a hundred Roman scudi; at a later date an English gentleman, Mr. Peter Jenkins, of Market Hayborough, made a donation of 200 [pounds] sterling. The Rev. Charles Plowden was also a benefactor of the American academy ; but beyond these we find few names recorded as furnishing substantial aid.