Werner Drewes: An Exhibition of His Color Woodcuts

Welcome to Georgetown's new Fairchild Memorial Gallery, and its current exhibition of the color woodcuts of Werner Drewes from the University's collection.  Born in 1899, this renowned artist and teacher emigrated in 1930 from his native Germany to New York City, bringing with him the traditions of German expressionism and the Bauhaus in which he had been well trained.

A prolific printmaker as well as an important painter, Drewes produced during his lifetime some 732 fine prints, including 269 etchings and drypoints, 30 lithographs, 14 celloprints, a lone silkscreen, and 418 woodcuts, of which 255 were in color. All of this vast oeuvre has been fully documented and illustrated by Ingrid Rose in her monumental 456-page opus, Werner Drewes: A Catalogue Raisonne of His Prints, published in Munich and New York in 1984, the year before Drewes died.

The University began collecting Werner Drewes' prints back in 1978 when it found in a local gallery the artist's color woodcut entitled "The Adventurer," the portrait of the gallery's owner and Georgetown alumnus, Louis Andre, class of '72. With subsequent purchases and three splendid gifts later, that single holding in 1978 has grown to 69, of which 33 are color woodcuts, from which this exhibition has been mounted.

Drewes, who did two color woodcuts in 1932 and four more in 1938, returned to experimenting with color in the early 1940s. By 1944 when he joined Stanley Hayter’s Atelier 17 now moved to New York, color woodcuts had become his main interest and concentration, in fact, most of his prints made since 1944 were woodcuts, and mostly in color.

Drewes tried working with several types of wood which he found in the local lumberyards.  At first, he settled for white pine.  But after moving to St. Louis in 1946, he discovered the qualities of redwood and found it not only a little softer, but also eminently satisfactory for his purposes.  It soon became his favorite.  For inks he depended almost entirely on Shiva oil color inks.  As for paper, although he experimented in the early 1960s with a pseudo-Japanese paper manufactured by Minnesota Mining and Manufacturing Company, he found this 3M product wanting, and printed nearly all of his color woodcuts on a soft Japanese paper.

Drewes cut his images into the woodblock with knife and gauge, and printed his block by hand. Inking the block, and sometimes using more than one block, he laid his dampened paper directly on top of the block, rubbing the back of the sheet down into the ink with a spoon or similar tool, sometimes even rubbing it with his fingertips to bring up the subtleties of the block's uneven grain.

As for the importance of Drewes' artistic achievement and technical excellence in producing his color woodcuts, no one has expressed it better than Jacob Kainen, when he wrote the following in Werner Drewes Woodcuts, the catalogue of the then National Museum of Fine Arts for its 1969 exhibition of the artist's woodcuts:

These are the works of a natural expressionist disciplined by a cubist sense of order. The physical immediacy of the prints is astonishing—transparent veils of color are overlaid with thick slabs of pigment. The artist's attack with knife and gauge is spontaneous and decisive. An open-hearted response to the grandeur of nature is clearly apparent. The colors dance and vibrate in a spirit of celebration. There are quiet prints too, in which reserved grays work with blacks to create compositions of great dignity. These are the prints of a painter accustomed to working freely and resourcefully with color and texture….in quality and extent [these] woodcuts are one of the important contributions to American printmaking.

Georgetown takes great pleasure in presenting to its students and faculty and to the public this exhibition from the University’s holdings of the work of Werner Drewes, one of America’s great masters of the color woodcut.

1899  Born in Germany, the son of the Lutheran pastor, Georg Drewes.

1907-1917  Attended boarding school in Brandenburg where his studies included Latin, Greek, and drawing.

1919-1921   Studied architecture and design in Berlin and Stuttgart. Produced his first woodcuts, and an etching in 1919.

1923-1927   Took time off to travel through Italy and Spain to study the Old Masters; then on to Latin America and the States, supporting himself and his new wife by selling his prints and doing portrait commissions. Returned home via ship from San Francisco to Yokohama, the Trans-Siberian Railroad to Moscow, and then on to Berlin.

1930   Emigrated to New York, introducing the spirit of the Bauhaus and German Expressionism to his colleagues at the Art Students League, etc.

1935-1936   Taught drawing and printmaking at Brooklyn Museum's Federal Art Project. Was a founding member of the American Abstract Artists Group in 1936.

1944   Joined the circle of artists at Hayter's Atelier 17, where he created his first color intaglio print, "Praying Mantis."

1946-1965   Appointed to the art faculty of Washington University, St. Louis, teaching with Philip Guston, Max Beckmann, and Charles Quest among others. Continued to travel and exhibit both in the States and abroad. Retired in 1965, settling in Point Pleasant, Pennsylvania.

1980-1981   Summered in Switzerland where he continued his printmaking.

1984   Honored on his 85th birthday by the Smithsonian Museum's National Museum of American Art with a retrospective exhibition, "Werner Drewes: Sixty-Five Years of Printmaking."

Items in the Exhibition:

I – Corridor Wing – Introduction with Portraits

The exhibition opens with its title, “Werner Drewes: an Exhibition of His Color Woodcuts,” mounted on two placards, one above and the other below his abstract color woodcut of 1945, “Apparition,” as identified and dated on its shelf card together with its “R” number, i.e., its number in the Catalogue Raisonné of his prints by Ingrid Rose, published in 1984.

To either side are two of his self-portraits, one in color dated 1947, and the other, dated 1932.  Here we can begin to observe the relative strengths of a woodcut created to be printed in black ink versus one intended to be printed in color.

To either side of these two self-portraits, we can again ponder those strengths in the two other portraits which have particular meaning for us at Georgetown: the one at the far right in Drewes’ portrait of Hans Weigert, a member of Georgetown’s faculty in the years 1952 to 1963; and on the far left, the portrait of Louis André, a Georgetown alumnus, class of ’72. 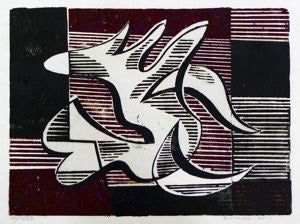 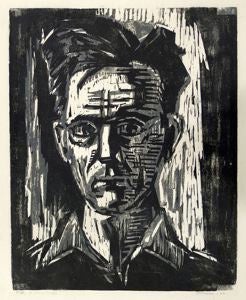 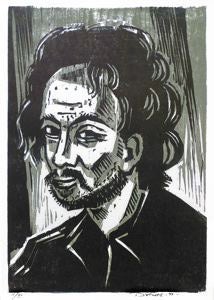 Here are eight color woodcuts, some abstract, others expressionistic. The first two, i.e., #'s 6 and 7, are dated 1944, the year Drewes joined the circle of artists working at Hayter's Atelier 17.

The next five, i.e., #'s 8 to 12, are dated from 1950 to 1964, and were created during Drewes' teaching years in St. Louis. Note especially #9, his expressionistic rendering of "Olive Trees," observed while on vacation in the environs of Lima, Peru.

Print #12, "Winter Morning," is a rendering of Drewes' view from his residence studio on Webster Avenue in St. Louis. It, as well as #11, "Gerhart Marcks," and #13, "Autumn Gold, " were printed on 3M's experimental pseudo-Japanese paper.

A close examination of "Autumn Gold" shows one of the reasons why Drewes experienced some dissatisfaction with 3M's paper. Notice in this case how the oils in some of color inks have leached out into the surrounding paper and have darkened slightly over time. 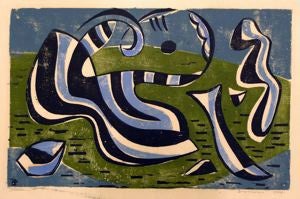 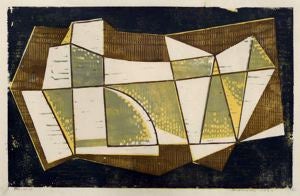 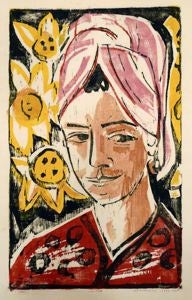 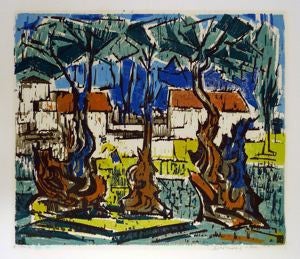 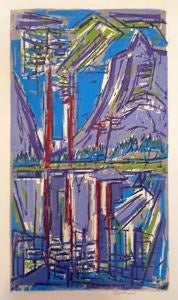 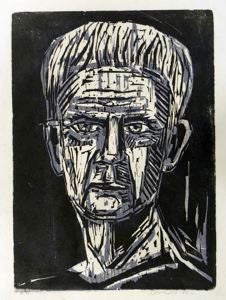 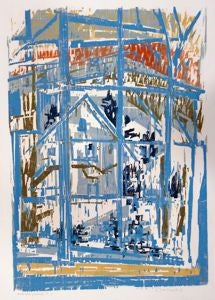 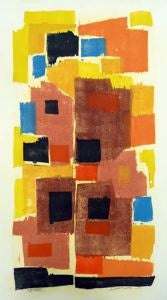 “Mechanical Ballet” and “Restrained Accents,” i.e., #’s 14 and 15 have been placed together as examples of what Jacob Kainen referred to as Drewes’ “reserved grays [at] work with blacks to create compositions of great dignity.”

The 4th print, “Swiss Village,” has been drafted from the prints of his final years to keep the peace between the quiet subdued color tones of the first three and the warm colors of the three that follow. 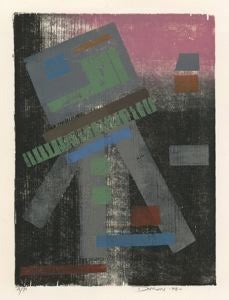 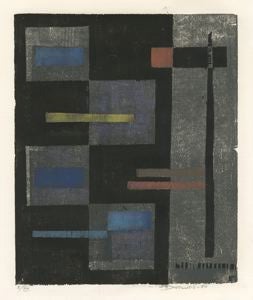 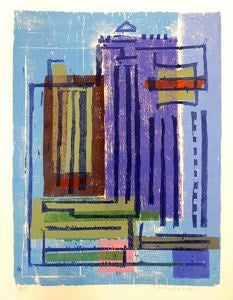 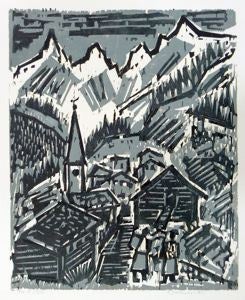 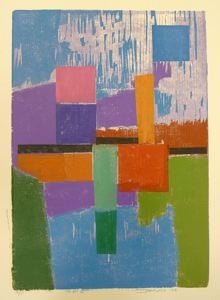 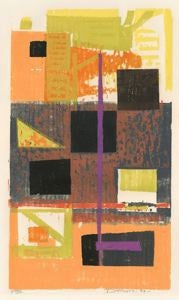 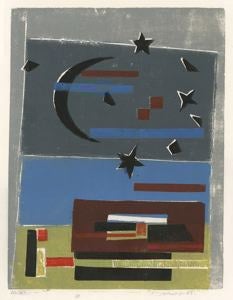 In #21, the abstract "Circle and Square,” we find Drewes at his best. This is followed by the vibrant color tones of his delightful "Aquatic Ballet," #22. This in turn is followed in #24 by his capricious ode to “Hilarity.”

The exhibition ends with #26, Drewes’ “Playful Construction” of 1983, a lively vaudevillian rendering of two vibrant sets of abstract elements skillfully performing against the rich wood-grained backdrop of the block. 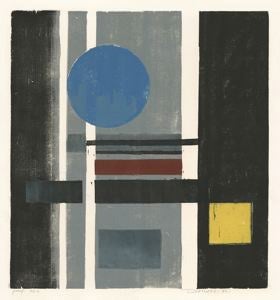 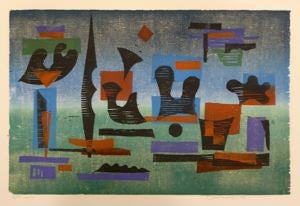 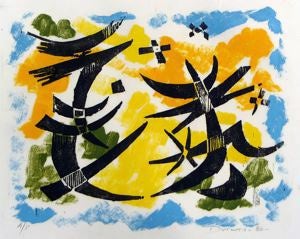 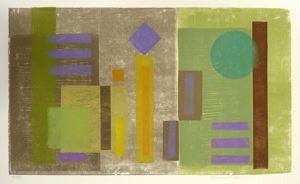 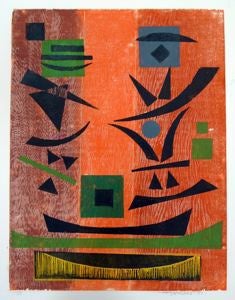