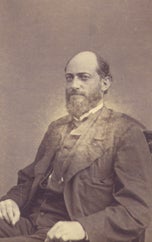 The James Ethelbert Morgan Memorial Book Fund was established with a bequest from Ethelbert Carroll Morgan. He stipulated in his will that that the money should be used in the "prosecution of research in the colonial history of Maryland and the territory now embraced in the District of Columbia and obtaining and preserving archives and papers having relation thereto." Initial interest money defrayed the costs of new and better housing for Georgetown's archives and the new Maryland Colonial Library in the basement of Healy Hall. The Georgetown College Journal of October, 1908 states that:

In order to carry out the purpose of this endowment, it was necessary in the first place to provide a fitting receptacle for documents and antiquarian apparatus. This has been accomplished by the completion of rooms devoted to the College Archives. The work was begun more than a year ago and finished last June, with results that have transformed the old gymnasium in the southeast corner of the Healy basement into a large airy room, tastefully appointed with tiled floor, finely tinted walls and antique furniture. Five ample windows admit a flood of light that lends a cheeriness to the Hall.

Income from the fund continues to support the mission of the Archives.

James E. Morgan, M.D., a professor at Georgetown University's School of Medicine, held over the course of thirty years the chairs of physiology, material medica, therapeutics, medical jurisprudence and hygiene. When he died in 1889 he was emeritus professor of material medica and therapeutics. During the Civil War he was in charge of the Soldier's Rest, an institution for sick and disabled soldiers on the way to or from the armies in the south, and was also surgeon-in-chief of the Quartermaster's Hospital. He was a member of the board of health, the American Medical Association and the Judicial Council and at various times the president of the Medical Society and vice-president of the Association of the District of Columbia. He served as a colonel of the Fourth Regiment, District Militia. He was a trustee of the public schools and a consulting surgeon and director at Columbia Hospital. 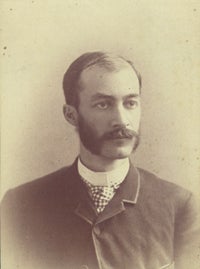 Dr. E. Carroll Morgan, son of James E. Morgan, died in 1891 at the age of thirty-five years. After attending Gonzaga College, he entered Georgetown's School of Medicine, and then the medical department at the University of Pennsylvania, from whence he graduated in 1877. He visited Europe and became a pupil of the famous French laryngologist, Charles Fauve, and for six months assisted Prof. Benjamin Schmitzen in the department of diseases of the throat and chest in the Vienna clinic. In 1881 he was elected surgeon in charge of diseases of the nose, throat and chest in the Central Dispensary and Emergency Hospital. He served as professor of laryngology at Georgetown's School of Medicine. He was a member of the Medical Association of the District of Columbia and of the American Medical Association, a fellow of the Philosophic Society, and president of the Laryngological Society. In 1889 the Faculty of Georgetown University, as a mark of their appreciation of Dr. Morgan's "proficiency and eminence in his profession," conferred upon him the honorary degree of Doctor of Philosophy.

Much of this information on the Morgans comes from the Georgetown College Journals of the time. 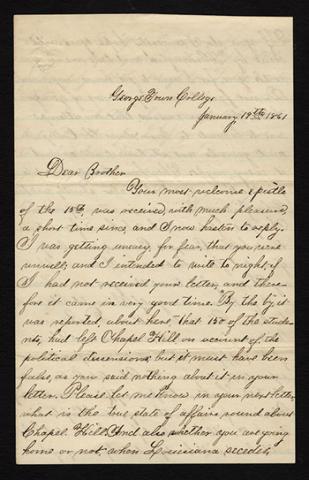 1861 letter from Georgetown student Isaiah Garrett, Jr., to his brother in Louisiana, one of more than 40 letters from Garrett acquired with this fund.