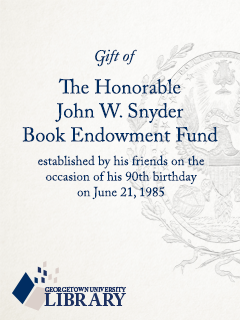 See a list of items purchased with this fund.

His eulogy was delivered by the Rev. Timothy S. Healy, S.J. at the Washington National Cathedral on October 15, 1985:

There can not be many more times when we in Washington will gather to honor a friend who came to use out of the last century. John Wesley Snyder was born in Jonesboro, Arkansas, in 1895, and after Vanderbilt University served as a lieutenant in the Field Artillery during World War I. He thus belongs to a world which has left us few of his contemporaries, and to a war that your children and my students see as history, along with Waterloo and Actium.

John Snyder entered public service in 1931 and from 1946 to 1953 was Secretary of the Treasury. He used to talk easily about his service during World War II, working for the armies that would no longer let him join, but his real pride came from what he helped do once the War was over: the reconversion of hundreds of plants to peacetime use; the stabilization of European currencies; the understandings that made commerce and business possible in the terrible winters of '46 and '47. He was proud, too, of his part in the Marshall Plan and the strong Treasury support it found, and proudest of all of the one program he himself designed and sold to the President, the GI Bill.

I had the advantage of knowing him only for the last decade of his life. His great days of public acclaim and public business were over. I think because they were, it was easier to know the man. Within weeks of my arriving at Georgetown, he took me to lunch at the Hay-Adams to point out that I came from a larger and, on the whole, kinder city than Washington. He advised that I listen to him, and for ten years I did listen, with delight, with awe, and with a growing understanding of how quietly great a gentleman he was.

John had a gift for living in the capital. His was kindness in a cruel town, honesty without a touch of acid. It was a delight to sit through a political dinner with him. He would run his eye across the dais, and as quick as a Chinese brush painter analyze and annotate the famous faces. There was never bitterness of unkindness. Those John called fools he usually saved by saying they were kindly ones; those he called unkind he pardoned for their folly. He was at his best when he himself played host, as at the parties he gave for all surviving secretaries of the Treasury each time a new one was appointed. He told me once, "It does these young'uns good to see somebody who can remember Grover Cleveland." To wander the corridors of Washington beside him was to meet everybody, for he knew everybody and everybody knew him. Here after all was a Secretary of the Treasury who had in three separate years balanced the federal budget.

He had, of course, served famously and well, but the operative word for John was always service. He gave it unstintingly and simply. He told me that when Mr. Truman (as John always called him) asked him to serve as Secretary of the Treasury, he at first hesitated, but the President insisted. The day he was sworn in he handed the President an undated letter that said simply, "Dear Mr. President, As of this date I submit my resignation as Secretary of the Treasury." As so often happened with John's stories, the compliment ended up being on someone else's shoulders. At the Eisenhower inauguration, while they were watching the parade, Mr. Truman reached into his pocket and handed him that letter from seven years ago. All he said was, "John, I don't think I'm going to need this now."

The instinct for service that marked John in politics carried on after his retirement, if one can call these last 33 busy years a retirement, marked as they were by his service on dozens of boards, public authorities and commissions. In the 1870's when this great cathedral itself needed his help, he pitched in, brought others with him, and devoted no small part of his time to making certain that the work on it continued. In his last year as Secretary of the Treasury he joined Georgetown University's Board of Regents and adopted the University, for which I am grateful, and four of its successive presidents, for which I am more grateful. He then adopted its basketball team and had a permanent seat for himself and his grandson in McDonough gym when the Hoyas played there. In 1964 the University began a fund raising campaign, which after two years was in sorry shape. Some of John's fellow regents suggested that the University ought quietly to abandon it to avoid embarrassment, and John's comment was classic. He said, "I am not in the habit of associating with causes that fail. If you can find me an office here, I'll make certain this one doesn't." The office was found, and two years later the campaign was successfully concluded.

All of these are details, stories taken out of the rich weave of John's life in retirement. But the stories fit as well his years in public service. He was something very American, the citizen in service to the nation and to the works and people that made it up. What was so beautiful and attractive about John's service was that he never called what he gave a "gift," always gave as though he paid a debt, and seemed to feel he gave no more than he owed.

He had another American mark, and that was his firm gaze towards the future, no matter how rich and exciting the past had been. He fought not to have his beloved Mr. Truman memorialized in cold stone, so that succeeding generations would walk around the statue and wonder, "Who's that?" John said to me a dozen times that he wanted a monument that was alive, and the Truman Foundation and its scholarships is just that. Hundreds of young men and women in graduate school and already in the nation's service bear the proud appellation "Truman Scholars." John took a secret joy his name was not on his design, that all the honor and all the gratitude went to the other Missouri artilleryman who for seven years kept John's resignation and his heart in his pocket.

John's sense of stewardship was profoundly Christian. Money and time he gave freely, as though they had no limit, and indeed in his wish and intention they did not. He was steward as well of harder gifts, those that take tact and kindness and a gentle touch so that they can be received without hurt and without resentment. To all who asked, his talent, his skill and his huge fund of experience were available, pressed down and flowing over. He also understood that there was a further gift, the hardest of all to give, and yet the richest, the Lord's ten talents, the gift of himself. He gave himself to those he served, to all he graced with his friendship, and above all to his family, to Drucie and John and to their children.

Our memories of John are happy, but all of us today feel a deep sense of loss, know an empty place against the sky. Part of this nation's history has passed from us. Closer to the bone, we know yet another kind friend who, as Virgil says, "Will no more hear us when we call." As fellow Christians we pray for him; "God rest him all road ever he offended."

Let us say together, "The Lord giveth," and we have known a great workman, a servant of this republic, a man of honesty and worth; "the Lord taketh away," and we have lost a friend, a piece of ourselves, a strong hand and a loving heart. If we stopped the ancient prayer there, John with a smile would have been the first to remind us that there is yet the third line, "The Lord giveth, The Lord taketh away, Blessed be the name of the Lord."

May John Wesley Snyder, counselor to America's presidents, servant to the American people, friend to all here, through the mercy of God rest in peace. Amen.

The fund is used for materials on banking, finance, and international relations. 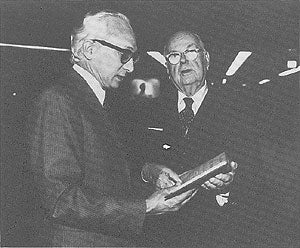