A Letter from Saint Damien of Molokai

The Francis X. Talbot, S.J. Memorial Collection, which contains manuscripts by Catholic saints and other important Catholic individuals, includes a poignant letter from St. Damien (1849-1889) of Molokai to one of his personal doctors, Sidney Bourne Swift. The letter describes an ailment affecting the priest in the last stages of his battle with leprosy.

For 15 years, Fr. Damien lived among and ministered to the persons with leprosy in the settlement at Molokai, Hawaii. He heroically served the members of his community in spite of danger to himself. Born Joseph de Veuster in Belgium on January 3, 1840, he travelled to the Sandwich Islands (Hawaii) in 1863, where he received his holy orders to become a Roman Catholic priest. Moved by the plight of persons with leprosy in Hawaii, he asked to take charge of the community who had been banished to the island of Molokai by the Hawaiian government. In 1874, Fr. Damien began his service as the first resident priest in the colony. During his time there, he provided for the spiritual needs of his congregation, built a chapel and two orphanages, constructed housing, and provided basic medical treatment for his fellow colonists.

In 1884, Fr. Damien contracted leprosy himself, but he decided to stay at his post. Over the years, several physicians attended to him. In the undated letter examined here, Fr. Damien wrote to Dr. Sidney Bourne Swift: 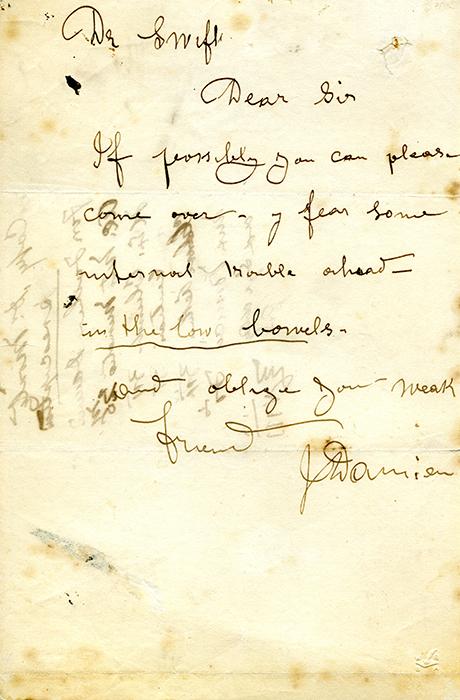 If possibly you can please

come over –  I fear some

in the low bowels –

and oblige your weak

A copy of a prescription for Fr. Damien written by Dr. Arthur Mouritz, his former doctor, appears on the back of the letter. 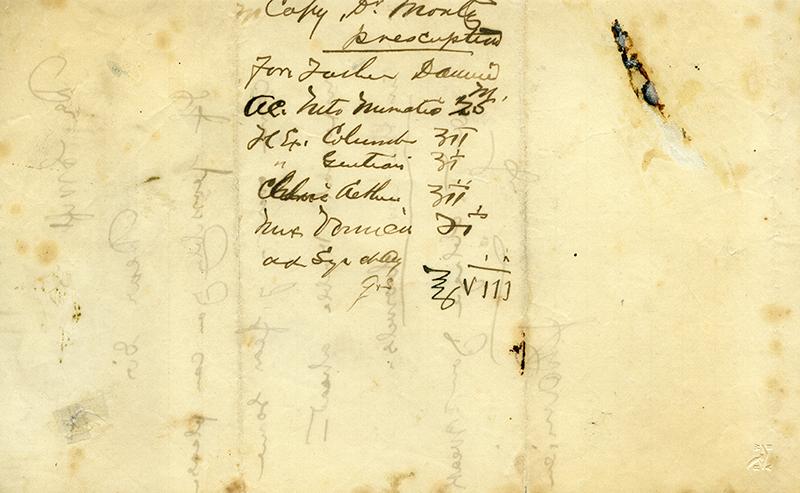 In the same folder of the Talbot Collection, several documents written in pencil in the hand of Dr. Swift are preserved. Dr. Swift monitored Fr. Damien’s temperature and pulse over time.

Dr. Mouritz became the first full-time resident doctor at the Molokai settlement in 1884. He ended his tenure as resident physician in late 1887/early 1888. He later authored the first American book concerning leprosy in Hawaii, titled The Path of the Destroyer and published in 1916.

Dr. Sidney Bourne Swift arrived on Molokai on July 1, 1888 as the new resident doctor for the settlement. Therefore, Fr. Damien’s undated letter must have been written between July 1, 1888 and April 15, 1889, when Fr. Damien died. In late 1888, Dr. Swift acknowledged Fr. Damien’s leprosy was in its terminal stage. The priest became bedridden, and was administered extreme unction.

Fr. Damien faithfully tended to the Molokai community for many years, in company with a small number of other priests, doctors, religious sisters, and nurses. This letter to Dr. Swift is perhaps one of the last letters he ever sent. On October 11, 2009, Pope Benedict XVI canonized Fr. Damien a saint in the Roman Catholic Church.