The Theodore Maynard Papers in the Booth Family Center for Special Collections contain three handwritten letters from author and Catholic nun Rose Hawthorne Lathrop, as well as manuscripts by and about her. The letters highlighted in this blog post document U.S. Catholic charitable work in the early 20th century and provide insight into Rose's dedication to the sick.

Rose Hawthorne (1851-1926) was born in Lenox, Massachusetts. She was the daughter of American author Nathaniel Hawthorne (1804-1864), who was known for the probing psychological aspects of his writing derived from his Puritan upbringing. In 1871, Rose married editor George Parsons Lathrop. Sadly, their only child died at the age of five in 1881. A writer in her own right, Rose published Along the Shore, a book of poems, in 1888. In 1891, Rose, along with her husband, converted to Roman Catholicism.

In 1895, Rose formally separated from George, who died in 1897. Rose then embarked on a career nursing people afflicted with cancer. In 1899, she established St. Rose’s Free Home for Incurable Cancer, in New York City. Rose became a Catholic nun and founded the Dominican Congregation of St. Rose of Lima, later changed to the Servants of Relief for Incurable Cancer. Rose’s religious name was Alphonsa. In 1901, she opened Rosary Hill Home in Hawthorne, New York, a town named after her.

Born in England, Theodore Maynard (1890-1956) moved to the United States in 1920, and became an authority on the Catholic Church in America. He earned a Master of Arts degree from Georgetown University, where he taught English from 1928 to 1933. In 1948, Maynard published A Fire Was Lighted, a biography of Rose Hawthorne Lathrop. During his lifetime, Maynard battled tuberculosis. He wrote A Fire Was Lighted in a tuberculosis sanatorium in Maryland. He died of a heart attack in 1956.

On January 4, 1909, Rose sent a 7-page letter to “Miss Kivlon” providing an update on work at the Rosary Hill Home in Hawthorne, New York. The first and last pages, posted here, provide a sense of where the letter was posted, the salutation, Rose’s handwriting, and her signature. 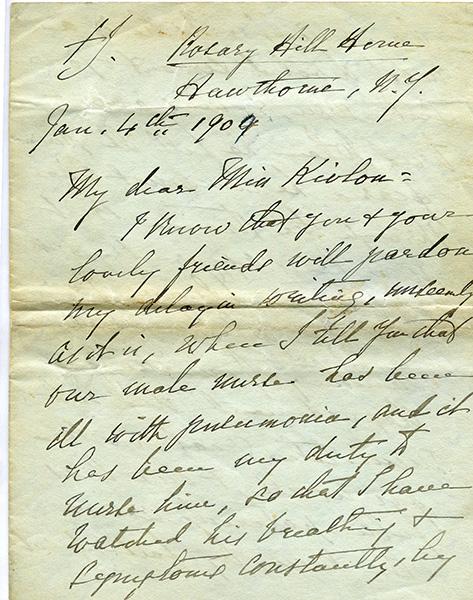 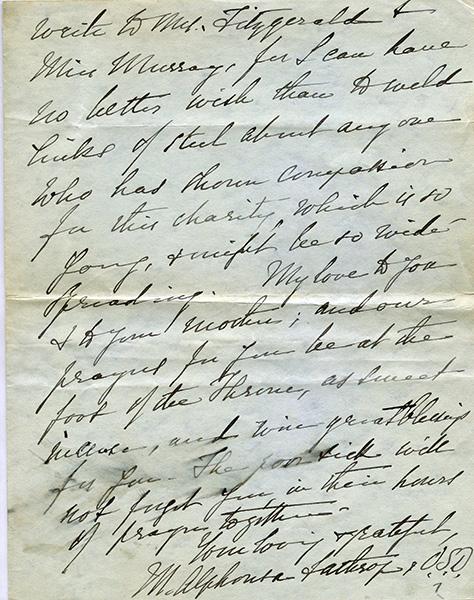 Rose revealed that a male nurse at the home was afflicted with pneumonia. Rose wrote that “it has been my duty to nurse him,” described him as a “most devoted servant of our sick men,” and said that he was regaining his strength. Rose also thanked her correspondent for a box of gifts. Receiving the box, Rose wrote, “made us exclaim with our gratification as we unpacked it.” Miss Kivlon sent much-needed linen and cotton for use in “dressings.” Rose stated, “Of course when a patient gives a sigh of relief + thanksgiving after a dressing done by a sister that sister is in a seventh heaven.” Rose concluded, “The poor sick will not forget you in their hours of prayer together.” She signed, “M. Alphonsa Lathrop, O.S.D.”

Rose sent a second letter to Miss Kivlon on June 25, 1924. Rose thanked her for a gift of $5, which would go towards the construction of a “fireproof country home here.” Rose shared, “My health has of course broken very much, from hard uninterrupted work + also my age, so that my promptness in acknowledging gifts to our Homes is very defective as you have seen.”

Rose penned her third letter on February 14, 1926. The one-page letter is presented here. 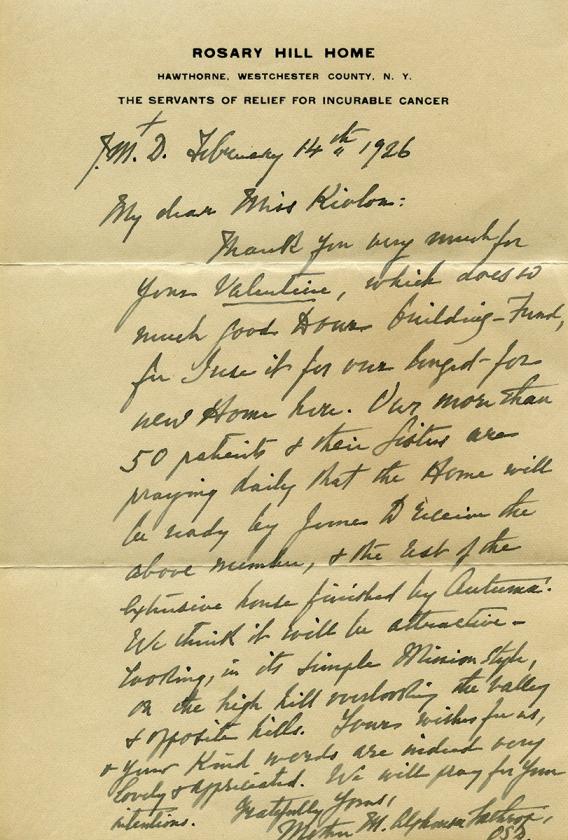 Rose thanked Miss Kivlon for a Valentine gift, which she would put towards the building fund for a “longed-for new Home here.” Rose explained that more than 50 patients along with a number of nurses were praying for the new Home. She added, “We think it will be attractive-looking, in its simple mission style on the high hill overlooking the valley + opposite hills.” In closing, Rose informed her correspondent, “Your wishes for us, + your kind words are indeed very lovely + appreciated.” This last letter was sent only a few months before Rose passed away in Hawthorne on July 9, 1929. Box 2 Folder 6 also contains an envelope, postmarked February 3, 1946, from M. T. Kivlon of Fitchburg, Massachusetts to Maynard at the Maryland Tuberculosis Sanatorium. Maynard was collecting source material for his biography of Rose. Miss Kivlon probably sent these three letters to Maynard to document part of Rose’s life. 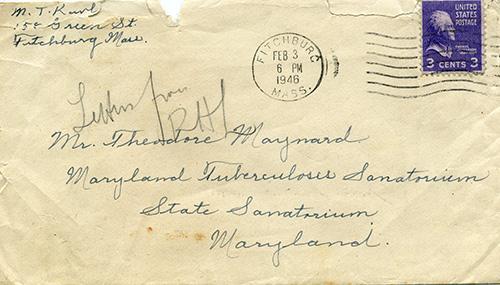 The Theodore Maynard Papers also contain manuscripts written by Rose about her life experiences, and notes written by Maynard relating to A Fire Was Lighted. These materials will be of use to scholars of American Catholic history and literature. 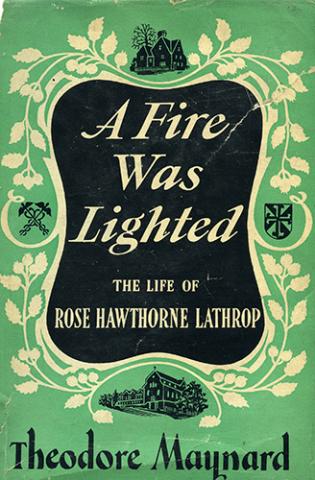 In 2003, the Catholic Church advanced the cause for canonization for Rose Hawthorne Lathrop. She is currently a “Servant of God.”