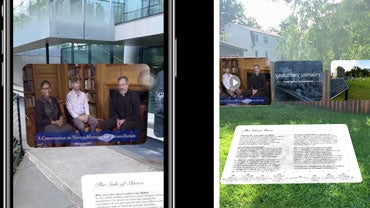 Augmented reality (AR)—in which mobile devices or other electronics display both the physical world and computer-generated enhancements in real time—is an emerging technology with exciting potential. A new AR app developed in the Library by Georgetown student Julian Dowell (C’23) with Multimedia Project Manager Barrinton Baynes aims to create an immersive walking tour of Slavery, Memory, and Reconciliation-related sites on campus that connects to SMR research and resources.

Perhaps the most familiar augmented reality application is the Pokemon Go app. Other examples include photo translation through the Google Translate app and the first-down markers superimposed on broadcasts of football games. But Dowell’s SMR AR app will apply augmented reality to an academic environment, creating a curated experience that incorporates audio, video, and direct links to website and research materials.

The app was inspired by works such as the Breonna Taylor AR Memorial Project, the Black Gotham Experience, and the Price of Georgetown StoryMap. SMR AR initially attempted to replicate and streamline a museum gallery, but Dowell and Baynes soon realized that updates were needed to adapt to the environment.

“The original design was beautiful, but we also needed to keep in mind accessibility and people who can’t move around as easily,” Baynes explained. For example, a museum’s informational panels might be positioned at eye level, but the virtual panels in the app are lower and tilted upwards to make them easier to read from a phone.

The virtual gallery can be viewed from anywhere, not just on Georgetown’s campus. But Dowell and Baynes are exploring the possibility of creating real-world anchors or using geolocation to create triggers for the app that would also allow it to function as an augmented walking tour of real-world sites.

The app is currently in its early testing phase, and Dowell and Baynes are seeking users to provide feedback. It is currently available only on iOS, though a version for Android devices will be created. To test the app, first install the TestFlight app, then download the walking tour, and open the SMARBeta app. The app includes one AR element so far, as well as a feedback survey on the user experience.

Dowell and Baynes are also interested in presenting the app to classes; contact bb286@georgetown.edu for details. See also the Library’s research guide, Augmented Reality: A Basic Guide to Building an AR Application.