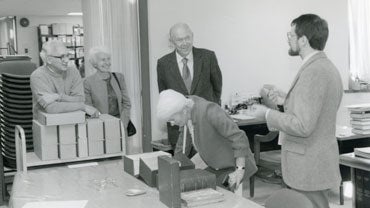 As Georgetown University Librarian from 1960–90, Joseph E. Jeffs not only oversaw the building of Lauinger Library but also the expansion of its collections. In 1979, he wrote to the acclaimed English writer and journalist Henry Graham Greene about the possibility of acquiring his remaining manuscripts, correspondence, and other personal papers. “I’m afraid that you have come a little late on the scene,” Graham wrote back, as the University of Texas had already purchased most of Greene’s manuscripts, but he did offer Jeffs a collection of letters he had received from Edith Sitwell, and a collection of postcards and letters from Evelyn Waugh. Through Joe Jeffs’ determination and charm, much more would follow.

In his most recent book, A Graham Greene Memoir (2021), written with his wife Jeannine, Joe Jeffs recounts the growth of both the Library’s Graham Greene collection and his friendship with the author. The Memoir’s narrative is revealed through reprinted letters between Jeffs and Greene, along with selected reminiscences drawn from Jeannine’s faithfully recorded diaries. From the 61 letters in the book that Jeffs and Greene exchanged between 1979 and 1991, we see an evolution from strictly professional communications to a more personal set of messages, though always with a focus on building Georgetown’s Greene collection. Letters from Greene’s sister, Elisabeth Dennys, and his partner, Yvonne Cloetta, round out the story of friendship.

Over the years, Jeffs visited Greene several times in England and also at his flat in Antibes, France, to review items that Greene was ready to sell. These collection-building trips were followed by extensive conversations between Jeffs and the Library’s trusted Curator of Manuscripts, Nicholas Breier Scheetz (C’74)—to whom the Memoir is dedicated. Together, Jeffs and Scheetz would discuss the value of Greene’s materials from both a financial and scholarly perspective. What was the cost? How well would the items fit with other parts of Georgetown’s special collections? How might the items be used then and through the years by students, faculty, and visiting scholars? Based on the results of their discussions, Jeffs would negotiate the final purchase with Greene. This cycle of tripartite exchanges occurred repeatedly through more than a decade of interactions with Greene.

In 1985 Joe and Jeannine Jeffs hosted Graham Greene and Yvonne Cloetta for a five-day sightseeing tour of Mount Vernon, Harpers Ferry, the Smithsonian, and other notable locations in and around Washington, D.C. Jeffs also invited Greene to give a lecture at Georgetown, where he addressed a standing-room-only crowd in Gaston Hall. During Greene’s visit, Nick Scheetz provided the author with a tour of the Library’s Special Collections unit. Greene expressed delight in the meticulously indexed and archived collections acquired from him, which at the time included several manuscripts, correspondence with notable writers, and various other materials.

Even as Joe Jeffs built a very significant Graham Greene collection at Georgetown, he and Jeannine also amassed a fine personal collection of first edition books (many of them signed), along with other materials by Greene. In honor of the Library’s bicentennial, Joe and Jeannine gifted their collection to Georgetown. Likewise, Nicholas Scheetz’s wife, Diana Pearson, recently donated his personal collection of books and manuscripts by Graham Greene and his biographer, Norman Sherry, along with materials by Greene’s large circle of literary friends, including Shirley Hazzard and Michael Richey. Nicholas, who passed away in 2016, established a trust to coordinate donations of his collections of more than 20,000 rare books and manuscripts. Trust donations to Georgetown have been made in honor of Nicholas’ Georgetown mentors: Professor John Hirsh, Jeffrey von Arx, and Joe Jeffs.

Nicholas’s siblings, Frederick Scheetz ’69, Raymond Scheetz, and Elizabeth von Doemming, also have helped establish a fund in Nicholas’s name to support the expansion of special collections, as well as support for exhibitions, publications, fellowships and lectures. We are grateful for the generosity of Georgetown University Library donors and for the richness that their gifts extend to others.

To order a copy of A Graham Greene Memoir, please contact Diana Pearson at pearsoninc@gmail.com.