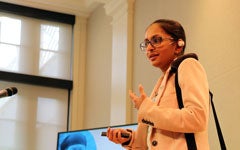 The hills of Georgetown posed a particular and potentially deadly challenge for Shavini Fernando (G’18). She lives with severe pulmonary hypertension due to Eisenmenger’s Syndrome, and doctors recommended against living alone or in areas with lots of hills and steps. While she was on campus, she experienced several cardiac arrests due to sudden drops in oxygen levels. “I’m used to it and know how to stay calm” and administer self-CPR to restart her heart, Fernando said.

But she realized that a better device for monitoring oxygen levels could be a valuable, and potentially life-saving tool for her and people with a host of conditions, including sickle-cell anemia, COPD, and cystic fibrosis. “If you monitor oxygen levels, you can predict things like seizures that can trigger a stroke or cardiac arrest,” she explained.

Pulse oximeters—devices to measure blood oxygen levels—did exist, but they took the form of bulky finger cuffs. She decided to create a smaller, wearable device that could take measurements continuously.

OxiWear started life as an independent study project while Fernando was a student in the Communication, Culture and Technology program. She was a regular user of the Maker Hub for both coursework and personal projects in addition to working there as graduate student operations coordinator, so it was an obvious choice to work on OxiWear there.

“I was a software developer, and I had no clue how to do this,” she said. In the Maker Hub she learned soldering to create the electronics, and 3D printing to develop models. “I wasted about a thousand dollars burning sensors while soldering them because they’re so tiny,” Fernando recalled.

But with training and the collaborative environment of the Maker Hub, by the end of a semester, she had created her first prototype. Fernando’s doctor had told her that the only place on the body where medical-grade blood oxygen numbers could be measured other than the fingertip was the ear, so the device was a basic sensor that could be worn there.

“The form factor was an interesting engineering challenge,” said Evan Barba, assistant professor in the CCT Program and advisor for the independent study project. “There was a question of how much pressure was needed. Shavini had to find the right spring resistance to have it clip and not slide off, but still give an accurate measurement.”

From Prototype to Product

Fernando didn’t start developing OxiWear with the intention of turning it into a business. But she entered and won the SFS Global Impact pitch competition, which gave her an opportunity to craft and refine a business pitch. The experience served her particularly well when then-Maker Hub Manager Don Undeen nominated OxiWear for the 2018 Bark Tank competition.

“When I climbed up to that stage, I remember my heart rate was close to 200.” Fernando recalls. “I cranked up my oxygen so I didn’t go blue on stage.” OxiWear won both first prize in the competition and the people’s choice vote, earning $35,000 to aid in development.

“I realized that now I have that money, I have to actually do this,” Fernando recalled.

Significant development work remained after Bark Tank. Miniaturizing the device was a major engineering challenge. “The original prototype was bigger than the ear, but the newest version is about the size of a pair of earbuds,” Fernando said. She and her team also worked to add functionality, such as the ability to send text alerts to emergency contacts, a synchronized mobile app, and a button that can call 911 for assistance.

Fernando also faced business and even logistical challenges. As an international student, she had to wait until graduation to get a work visa. She worked with a law firm to file patents and trademarks, but she also worked with the Library’s Business Liaison and Reference Librarian Jennifer Boettcher to prepare a patent search—a potentially complicated and pricey process. “I can save you money by going to a free source, and I can save you time by teaching you how to conduct the search effectively,” Boettcher said. She helped Fernando use the U.S. Patent Office’s free databases for patent applications and granted patents, and shared other marketing resources the Library subscribes to.

Boettcher and Undeen helped to introduce Fernando to Georgetown’s Entrepreneurship program. “Connecting entrepreneurs-in-residence with makers is a big chunk of what we do here,” Undeen explained. “Some of those relationships helped her connect with people in the business school to put her product forward.”

OxiWear will begin beta testing in January 2022, and Fernando hopes to launch it for consumers by June. In addition to potentially saving lives, it may reduce health care costs for both hospitals and patients by allowing doctors to monitor their patients remotely.

Another potential market has also emerged. The coach of Olympic swimmer Katie Ledecky and the Washington Wizards basketball team are both testing the device to see if it can improve performance by making high-intensity or high-altitude training safer, and to track how sleep and eating patterns may affect oxygen levels. “It’s filling a gap that wearables that currently exist can’t match,” Fernando said.

While several commercial products have had their origins in the Maker Hub, it’s also a wonderful place to bring personal projects to life. “There’s all sorts of reasons to create things,” Barba said. “If you combine physical creation with a little bit of electronics understanding, you can create viable products, or things that add convenience, joy, or interest to your day-to-day life.”

“The Maker Hub is a place where people can bring their own energy and get out everything that they’re putting in,” added Undeen.

The Maker Hub recently reopened to Georgetown students, faculty, and staff with new Manager David Strout. The Library will host the Maker Hub Expo October 15, during Family Weekend, with a button-making event in front of the Library from 2–4 p.m.