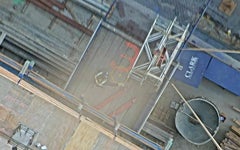 If you’ve been on campus recently, you’ve likely seen construction cranes, but you may not know that they are equipped with a safety device originally developed in the Maker Hub. Dalton Dwyer (SFS’11, L’18) developed CraneCam, a trolley-mounted camera that shows crane operators the objects they are lifting, after watching construction cranes outside his first-year law classes in 2014. “When tower cranes are used to build buildings, the operator sits in a cab at the top of the crane, and often the things they pick up are out of view,” Dwyer said.

Eventually he visited the construction site and confirmed his suspicion: The crane operators didn’t have a good view of their payload. Instead, they relied on ground workers to guide their hooks—a typical but potentially dangerous practice. “If they swing the wrong way, they could hit something or a worker can get caught in the line,” Dwyer explained. A few companies have addressed this by installing cameras on the hook of the crane, but that’s not a perfect solution: as the hook is lowered, its field of vision shrinks, so objects or workers near the payload may disappear.

Dwyer started building CraneCam in the Maker Hub in January 2015, and had a working prototype within about six months. The construction company gave him half an hour of crane time to test it, and it showed enough promise to continue development. After another year and a half, CraneCam was ready for market.

“I didn’t have a background in technology, but the Maker Hub is a space you can go to tinker around,” Dwyer said. He used tools like soldering irons, drills, and saws, learned how to build radio systems to allow the camera and monitor to communicate, and even solved a tricky issue with water getting into the system’s ethernet cords.

The Maker Hub also helped him maintain an entrepreneurial spirit. “Starting a company alone is stressful,” he said. “Being in the Maker Hub where you’re surrounded by people with the same mindset, who want to build things, was a big positive.”

CraneCam became a success. Dwyer estimates it has been installed on 70–80% of cranes in D.C., and he started to expand into Baltimore before merging with Quartz, a crane safety company in California. He now works for Quartz as product manager.

He credits the product’s success to a mix of good luck—fortuitously seeing the construction cranes, and speaking to the friendly site superintendent who gave him access to one to test his idea—and opportunity. “A school, like a student, has to have a little interest in everything,” he said. “I’m impressed by Georgetown’s willingness to invest in things like the Maker Hub, Georgetown Entrepreneurship, or the WeWork space downtown.”