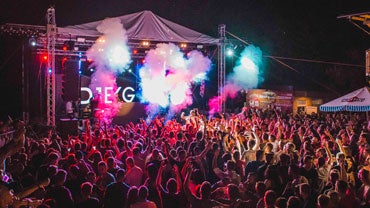 Charles Hinnant (SCS’23) is an avid fan of music festivals. “I love everything that goes on during festivals, the space of inclusion, the feeling of freedom, and seeing people have the best time.”

But any large gathering of people needs effective emergency response, as demonstrated by the 2021 Astroworld Festival, where ten people were killed in a crowd crush and more than 300 injured. Hinnant was an attendee at that event, and he saw a way to make similar festivals safer.

“The tools [emergency responders] use for a 21st century festival are pretty archaic,” Hinnant said. “Multiple paramedics have shared their stories of having paper maps and flashlight cones like on an airport tarmac, and they’ll stand on each side of a 20,000-person crowd and comb through looking for people.” As a result, it can take more than an hour to find critically injured people.

He brought some rough sketches to the Maker Hub, and Maker Hub Manager David Strout helped him identify components that might work. To allow the system to locate end users, Hinnant chose an Arduino Neo-6M GPS module, paired with an Arduino microcontroller as the core of his prototype. Hinnant also learned to solder, assemble the components, and program the Arduino in the Maker Hub. Eventually, Hinnant's design evolved to include an LED indicator light, and in the future he plans to develop a 3D printed shell to house it all.

Rave Me Away was a finalist in the 2022 Georgetown Entrepreneurship Challenge, and Hinnant was accepted into the Georgetown Entrepreneurship Summer Launch Incubator to continue development. Hinnant applied for and received a provisional utility patent for the wristband design and functionality in February 2022. “That gives me a year before I need to file a non-provisional utility patent for my product,” he said. In that time, he hopes to have a pilot launch and form a partnership or license with an event company so the device can become embedded into the festival experience. He also plans to apply for a provisional design patent for the 3D printed shell he plans to assemble in the Maker Hub.

“It’s part of a commitment to caring for others,” Hinnant said. “The ongoing problem I have seen with festival disaster care is that there is a stronger priority on managing outcomes than creating preventative measures. There’s a need to innovate in this space to prevent tragedies like Astroworld from happening and I want to give people the right tools to do the job.”