New and Notable for December 2022 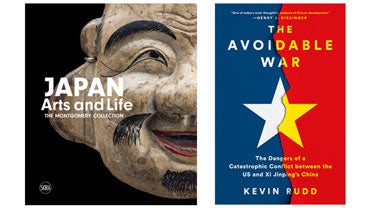 Kierkegaard’s The Sickness Unto Death: A Critical Guide, edited by Jeffrey Hanson and Sharon Krishek. A collection of new essays that guide readers through the philosophical and theological significance of one of Kierkegaard’s most important works, while clarifying the complicated ideas it contains.

The Remarkable Reefs of Cuba: Hopeful Stories from the Ocean Doctor by David E. Guggenheim. While the Caribbean has lost half of its coral reefs since 1970, Guggenheim has recently discovered surprising signs of hope in the remarkably healthy reefs of Cuba.

The Avoidable War: The Dangers of a Catastrophic Conflict Between the US and Xi Jinping's China by Kevin Rudd. Former Australian Prime Minister Rudd has studied, lived in, and worked with China for 40 years. This work demystifies the actions of both China and the United States in hopes of charting a path to avoid geopolitical disaster.

The Miniaturists by Barbara Browning. A series of short essays that blend autobiography and the author’s attraction to tininess with research on unexpected topics.

The Sunday Paper: A Media History by Paul S. Moore and Sandra Gabriele. An exploration of how the Sunday paper became an essential part of American leisure by borrowing forms from magazines, film, and radio in pursuit of mass circulation.

The Big Sick, directed by Michael Showalter. A Pakistani-American stand-up comedian falls for a white grad student, and decides to keep their uncertain romance a secret from his traditionalist, Muslim family. However, their relationship gets more serious when she develops a mysterious illness, which in turn forces him to bond with her parents.

What Comes Around, directed by Reem Saleh. A colorful documentary following the inhabitants of a poor neighborhood in Cairo over six years, revealing an intimate portrait of their everyday existence seldom found on the screen.

Platino Educa: A collection of more than 300 full-length Spanish and Ibero-American films, covering a variety of humanities and social science subjects. Our trial to Platino Educa expires at the end of December. Comments may be sent to Jade Madrid or eresources@georgetown.edu.

Early Arabic Printed Books from the British Library. A collection of digitized books from the archives of the British Library, mostly in Arabic, includes texts on a wide variety of subjects, from Quaranic studies, Islamic law, Arabic language and literature, and natural history published from 1475–1900. Trial expires December 21. Comments may be sent to Ryan Zohar or eresources@georgetown.edu.