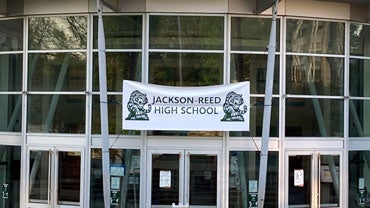 D.C. Public Schools set off a controversy in 2020 when it announced that it would rename Woodrow Wilson High School in the Tenleytown neighborhood.

There have been efforts to change the school’s name for many years, due to Wilson’s support for segregation and the effects of his policies on the Black population of the District. In 2020, Mayor Muriel Bowser created the D.C. Facilities and Commemorative Expressions Working Group to evaluate facilities named for historical figures who “contributed to our long history of systemic racism.” That group recommended renaming the school—after playwright August Wilson.

Kira Pomeranz (C’22) researched the story and developed the “From Wilson to… Wilson” StoryMap as a project for the Media and Social Justice class taught by Assistant Director and Lecturer in the Journalism Program Ann Oldenburg.

“What really drew me in to [the story] was that the name change originally suggested was deemed as not good enough,” Pomeranz said. “People were saying it might be a minor improvement, but it’s not good enough.” While August Wilson’s work is highly acclaimed and important to American theater, Wilson himself had no connection to the school or the District.

Pomeranz’s sources for her research included students and teachers at the former Wilson High School, Tenleytown residents, activists fighting for the name change, and even a staffer at the Woodrow Wilson House. The StoryMap format allowed her to combine the information she gained with maps, photos, and video into a cohesive multimedia narrative. “Sometimes it’s hard to understand writing without the visual component,” Pomeranz said. “Using StoryMaps at Lau, I was able to show how localized it is and to understand the proximity of all the places that mean so much to the story.”

Like Pomeranz, each of the students in the class immersed themselves in a community and explored it through several assignments. Library staff came to the class to help them use the StoryMaps software. “The StoryMaps tool was an ideal way for students to present multimedia projects they produced in the class,” Oldenburg said. “Not only did StoryMaps provide a beautiful scrolling way for readers to engage with the various components, but it enabled each student’s assignments to build a beautiful multimedia, deep-dive finished product.”

The name change saga ended with success for community members who opposed the Wilson name. In December, the D.C. Council decided to change the school’s name to Jackson-Reed High School, honoring Edna Jackson, who became the first Black teacher at the school in 1955 shortly after its legal desegregation, and Vincent Reed, the first Black principal of the school and later superintendent of D.C. Public Schools.

For information on using StoryMaps for your research or in your classes, see the Story Maps guide or contact the Digital Scholarship Services Unit.