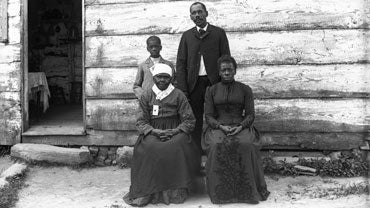 Archivists at the Woodstock College Archives at Georgetown University Library have identified a historically significant photograph of Louisa Mahoney Mason, a woman who escaped the 1838 sale of individuals enslaved by the Maryland Province of the Society of Jesus. A portion of proceeds from the sale helped to stabilize funding for the Maryland Province and Georgetown. This is the only image found to date within Georgetown Special Collections of people who were once enslaved by the Jesuits.

The photo has tremendous value for Descendants, scholars, and genealogists researching the families of the people enslaved by the Maryland Jesuits. “This photo is a powerful artifact of the relationship between the Maryland Jesuits and the Mason family,” said Mary Beth Corrigan, Curator of Collections on Slavery, Memory, and Reconciliation. “The Jesuits recognized Louisa Mahoney Mason and her son Bob Mason for their piety and faithful service to the St. Inigoes and Woodstock communities.” As the Jesuits prepared to transport people to the Alexandria slave market in 1838, the superintendent of the St. Inigoes plantation Father Joseph Carbery tipped off Louisa and her mother. They hid in the woods until the slave ships left for Louisiana.

They remained enslaved until emancipation in 1864, but she and her children continued to work in the Jesuit gardens at St. Inigoes.

As detailed in a 2019 research paper by undergraduate student, Paul Rochford (C’20), Louisa continued to be a prominent member of the St. Inigoes community throughout her life, and she also remained in close contact with the families who had been sold to the Louisiana plantation. Several of her children remained at St. Inigoes into the 1880s, and many eventually took positions working at Woodstock College, the Jesuit seminary near Baltimore. The Masons also played important roles within the benevolent associations that supported Black Catholics in the segregated parishes of Maryland during the late nineteenth and early twentieth centuries.

Woodstock Theological Library Digital and Archival Services Librarian Adrian Vaagenes discovered the image depicting four people while investigating boxes of glass plate negatives taken by Fr. John Brosnan, S.J., an early photography expert who took thousands of pictures around the Maryland area from the 1890s to the 1940s. Several of the images Vaagenes found were new to him, including one in an envelope marked “St. Inigoes - Bob Mason family + our workman.” “I wanted to check to see if these photos were simply duplicates of the already-digitized photos, or something not seen before,” Vaagenes said.

Corroborating the identity of the people in the photo required a collaborative effort. “Descendants of those who were enslaved, as well as Georgetown students and faculty provided information that helped us identify two of the people in this photo,” Vaagenes said. As with many old photos, there was not sufficient recorded information to know for certain the circumstances and identities of the people pictured. Vaagenes noted, “We were able to piece together both facts and associations from the research conducted on the community enslaved by the Maryland Jesuits.”

The photo itself provides important clues. Even though it isn’t dated, the style of clothing worn by the subjects suggests the photo was taken between 1890 and 1910. The estimated age of the older woman seems to be close to the age that Louisa would have been at that time. Archival records show that the Masons lived at St. Inigoes long after emancipation in 1864. St. Inigoes Villa ledgers and diaries mention Robert Mason and his wife, and several narratives by Jesuits, including a 1912 article by Joseph Zwingé in Woodstock Letters, recall “Aunt Louisa” and “Our Villa ‘Bob’.” Additionally, the 1900 U.S. Census confirms that Louisa was living with Robert.

The identity of the younger woman in the photo is less clear. It is possible that she is Robert’s wife, Mary Mason. But Vaagenes suspects that she may be Josephine Mason Barnes, one of Louisa’s daughters. Shortly after identifying the photo of the Mason Family, Vaagenes was encouraged by Georgetown history faculty member, Adam Rothman, to speak to Mellissa Kemp, a descendent of the Masons. Professor Rothman knew of the family connection between the Masons and their descendant Mellissa Kemp. During their conversation, Kemp mentioned that she has a family photograph of Josephine Mason Barnes. While the family photograph of Josephine was taken at a later date, it bears a striking resemblance to the woman in the Brosnan photograph. Regrettably, there is no evidence to help identify the young male child in the picture.