The Martyrdom of Saint Andrew

The Art Collection's impressive Martyrdom of Saint Andrew (ca. 1653) is attributed to Genoese painter Domenico Fiasella (1589-1669), a leading exponent of the seventeenth-century Genoese School of painting. 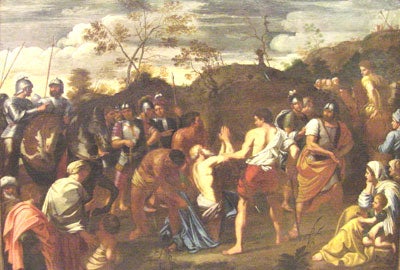 According to some accounts, seven decades after Jesus was crucified, his apostle Andrew underwent the same punishment. To disparage and mock his Christianity, the Romans tilted the cross on which he was crucified so that it appeared as an "X" rather than in the shape held in reverence by the Christian faithful. Andrew had converted multitudes to Christianity throughout the Mediterranean, including the wife of a Roman provincial governor in southern Greece; the governor, in turn, immediately ordered Andrew to be scourged and then crucified.

In the center, Andrew is shown on his knees in a prayerful pose. A sense of dramatic instability, characteristic of many Italian Baroque paintings, imbues the diagonal composition. Groups of figures and a series of hills lead the eye to the final hill in the upper right, where the cross stands awaiting Andrew's impending martyrdom. On the hill in the upper left-center of the canvas, two trees cross to form an "X," reflecting the shape of the cross on the opposite side of the painting. The leaves sprouting from the branches of these trees suggest life, in contrast to the cruciform tree trunks presaging Andrew's imminent death. A partially obscured man in the lower left corner of the canvas stares at the viewer, inviting us into the scene as part of the audience that encircles Andrew.

Most of Fiasella's works depict religious subjects, as well as mythological scenes and portraits. Fiasella was influenced by a 1607 trip to Rome, to see and copy works by Caravaggio, Guido Reni, Guercino, and other masters, and to visit the sculptural and architectural monuments of classical antiquity. He was also influenced by Flemish masters Peter Paul Rubens and Anthony Van Dyck, both of whom visited Genoa. When Fiasella returned to Genoa in 1616, he received patronage from the Genoese nobility and later founded a school to train young painters.

Unfortunately, no records survive detailing the provenance of Georgetown's Martyrdom of Saint Andrew. After extensive research, Art Collection Coordinator LuLen Walker attributed the work to Domenico Fiasella based on its stylistic similarities to his other works (including another version of The Martyrdom of Saint Andrew), such as his use of color and figure forms. The religious subject matter is compatible with other important Italian Baroque paintings in the Georgetown University Art Collection, such as Luca Giordano's The Calling of St. Matthew, and depictions of St. Sebastian and St. Jerome that are currently in the Vault awaiting conservation.

Roughly three feet tall by four feet wide, the painting is in good condition considering its manufacture more than 350 years ago. Craquelure (a networks of cracks), and loose, flaking paint, are evident in a several places in the upper-center and upper-left areas of the canvas. Recently the painting was removed from an administrative office where it was hung, to prevent further deterioration. The surface paint layer has been abraded in several places in the bottom half of the work to reveal a thin underlayer of paint through which the weave of the canvas can be seen. Brown and black spots of dirt dapple the entire surface, darkening the entire composition and obscuring the bright colors with which Fiasella likely painted. The entire work needs to be cleaned, the canvas restretched, and several areas retouched-after which it will more closely demonstrate the original work of the artist.