They Came to Georgetown: The Irish (Part II) 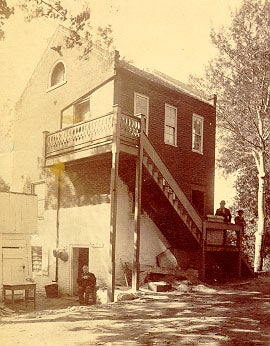 The College Bakehouse and Store

The college bakery was housed until 1908 in the basement level of a nondescript building near the southwest corner of Dahlgren Chapel. The college store was one flight up, and the shoemaking shop occupied the top of the house.

The building was constructed in 1814 for $890.93, not including excavation, carpenter work and plastering on the upper floors. It was torn down upon the completion of Ryan Dormitory with its modern kitchen facilities.

For some 40 years, from about 1856 until 1895, the bakery was tended by Brother Thomas Gavan. Brother Gavan was one of a large number of devoted coadjutor members of the Society, many of them Irish, who provided the auxiliary services upon which the college depended: cooking, carpentry, cleaning and repairing, tending such enterprises as the store and supervising allocation of locks and desks and appurtenances to the young gentlemen. 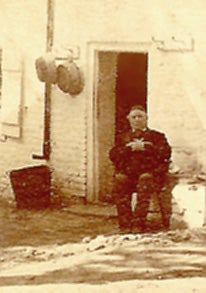 Like most of these men Brother Gavan is now little more than a name in the official records. Unlike most, he is the subject of a variety of anecdotes which tell us something about him and about the college during his tenure. Father Francis Barnum, a Jesuit and Georgetown alumnus fascinated with Georgetown's history, has left us most of what little we know of Brother Gavan.

Thomas Gavan was born December 31, 1822. We do not know where; that he was Irish will appear in the course of two of the stories about him. He entered the Society July 25, 1854, and took the first vows from Father Charles Stonestreet, president of Georgetown, on July 31, 1856. In that year he was appointed assistant to baker Brother Bartholomew Doyle. Two years later he succeeded Brother Doyle, who for reasons unknown became an assistant in the tailoring shop.

It was an auspicious change. The quality—not to mention the amount—of food served at the college was, like New York City politics, always a matter for "reform." In the late 1860s, when Father Barnum was a student, the principle fare at breakfast and supper was bread. But, as Father Barnum said (of Brother Gavan), "his bread was unexcelled. During his time the reputation of Georgetown bread extended over the entire province [of Maryland]."

Among the culinary enticements of dinner was pie, and Father Barnum describes it, and its role in college life at length in his reminiscences:

"As I have mentioned pie a few words on this great College delicacy may not be amiss. The Georgetown College pie was an institution, it was made of dried apples & formed the staple dessert during the entire year. It was made by Bro. Gavan and like everything from his bakery it was excellent. There were two, and only two varieties of pie, but the difference was only in form & they were known as square pie and round pie. The first which was for the students, was baked in great oblong pans, and then cut up into generous sized squares. The pies destined for the Fathers table were baked in the ordinary pie plates. These latter were also called Priests pies. Bro. Gavan was very stout and very good-natured and furthermore he never looked on the boys as his natural enemies. When he spread out a long row of pies to cool he certainly was well aware that it was placing a great temptation in the way of youth…

The students devoted considerable energy to the problem of stealing pies left out to cool; if not caught with the smoking pie in their hands, they were generally tolerated:

"Brother Gavan never raised any howl over a raid. The good old man rather enjoyed it and I think he used to bake two or three extra pies just for the purpose."

The two following anecdotes complete our knowledge of Brother Gavan; both are taken from one of the volumes entitled "Stray Notes" in which Father Barnum recorded aspects of college life that have only rarely intruded on its official histories.

"In person Br. Gavan was exceedingly imposing. He was tall and rather stout and with a most benign countenance. In fact, as long as he kept quiet, one would take him for a bishop or rather an archbishop. At the time of the College Centennial Bro. Gavan was standing one day at the front entrance watching the crowd. He was dressed up for the occasion, wore a long cloak and certainly presented a most dignified appearance. A Harvard Professor approached him and politely inquired whether he was a member of the Geo.town Faculty. 'I am' replied the Bro. 'May I ask what particular branch?' 'I am the baker, Sir 'said Bro. Gavan with the full Hibernian accent.

"Once while a circus was in town Bro. Gavan was allowed to attend a performance. [NB. This was during the period of the simple life, before communication with Rome became so easy and frequent.] Provided with a ticket and two five cent pieces for carfare he set out. In the circus he was accosted by a slick individual who showed such a great interest in him that the simple old Brother felt quite flattered by the attention of the kind and gentlemanly stranger. After the performance Br. Gavan boarded a street car to return to the College. When the conductor approached him for his fare he reached into his pocket for the five cent piece, but it was gone. In a loud voice he exclaimed 'I've been robbed!' The conductor and passengers all expressed much sympathy with him, but one simple soul asked how much money he had lost. In tragic tones Bro. Gavan announced the sum 'Foive Sints.' -There was lots of fun in that car."

When Brother Gavan died at the end of 1895 the College Journal made no mention of him. Yet someone connected with the college had been spurred to learn the secret of his estimable bread, and so, preserved in the University Archives, is a small manuscript entitled "Science of Bakery." For the edification of those interested in cooking, and as a tribute, however late, to Brother Gavan's skills and labors, it is transcribed here in full.

2) at 7 ¼ A.M. he works & kneeds it & puts salt and water in the sponge. [NB. In warm weather the water shd. never be hot; in cold weather lukewarm; in summer, at the ordinary temperature of the pump; else the bread will become black and sour.]

3) After the dough has been well worked up, leave it rise for one hour.

4) After the hour is passed, Br. Gavan works it again for a quarter of an hour and then leaves it again for a half an hour, a process which he calls proving it -Experience has taught him that this makes the bread fine & light.

5) After a half hour's proving he makes it into loaves and leaves it in the pans for nearly an hour.

-To a barrel of flour, a gallon of yeast. Take a bucket of potatoes, boil them skins and all, -when well boiled turn them into a tub, pour over them 4 lbs of flour; then smash them up-

Then take 3 gallons more of cold water & mix them all well. Over this pour the gallon of yeast; mix well. and leave in a tub of double capacity for the space of from 12 to 13 hours.- It ripens thus.

Then strain it well through a tin strainer-pour 2 gallons of 1. w. [lukewarm water] over the skins

-mix & with it make the sponge, as above.

3) Take an ounce of malt & put it into a pint of cold water - & then pour it over the juice of the hops.