Along the Potomac: Vintage Views by Local Etchers

This exhibition highlights some rare etchings by local artists depicting scenes in and around the community of Georgetown and Washington, D.C. in the first half of the twentieth century. Their nostalgic views concentrate on the C & O Canal, the Potomac River, and various surrounding neighborhoods. Diminutive in format, the scenes reveal the artists’ love for the natural world and their intent to capture the essence of their surroundings. The technique reflects the tradition of the 19th-century Etching Revival, when pioneers such as James McNeill Whistler and Francis Seymour Haden in England drew inspiration from the etchings of Rembrandt.

In the prints exhibited below, those that have dates and edition numbers are noted accordingly. Some of the prints have relatively little information in the margins while others have a few inscriptions. Clicking on a thumbnail will reveal an enlarged image where it is possible to examine these notations more closely. The two featured artists would typically include their initials in the bottom corner of the etched plate, as well as signing in pencil in the margin. Clicking the link in the title will take you to the art collection database where you can find additional works by these artists.

Etching is a traditional printmaking technique for creating multiple impressions dating back to the fifteenth century. In this process, a copper plate is covered with a waxy substance called ground, and a pointed tool called an etching needle is used to draw an image on the plate, exposing the copper in the lines drawn through the ground. The plate is immersed in acid which “bites” into the exposed lines, with the depth of the line dependent on how long the plate remains in the acid. The plate is removed from the acid bath, and the ground is cleaned off. Then ink is applied to the plate, usually with a roller, and the plate is wiped clean, leaving ink in the recessed lines. A sheet of dampened paper is placed over the plate and the two are rolled through a press, forcing the ink to transfer to the paper, creating a mirror image of the plate. To create effects of greater depth and shadows, the lighter areas of the composition may be stopped-out by covering with ground. The plate then gets reimmersed in acid to create deeper biting in the exposed areas. This process may be repeated until the artist is satisfied with the results.

Benson Bond Moore grew up in a genteel artistic environment. His father had a framing and restoration gallery and did work for the White House and the elite society of Washington, D.C. Moore studied at the Corcoran School of Art under noted landscape painters Max Weyl and Edmund C. Messer, among others. As a young man, he had some interesting assignments with a photo-engraving company doing technical drawings for Alexander Graham Bell and the Smithsonian Institution. By the 1940s, Moore had taken over his father’s business and was performing contracted art restoration for some prominent works in the U.S. Capitol and the House of Representatives.

The artist loved nature walks and sketching outdoors. In 1914 he was walking along Foxhall Road and encountered three other like-minded artists who had formed The Rambler’s Sketch Club. He became a member of the group and it soon grew to include others. Over the next few years, they continued to explore the surrounding neighborhoods together, sometimes via trolley car, sketching the local scenery. In 1928, Moore’s art career was officially launched with a solo exhibition of his etchings, drypoints and lithographs at the Corcoran Gallery of Art. He was a founding member of the Miniature Painters, Sculptors and Gravers Society in 1931 and became a central figure in the artistic community, teaching etching and exhibiting widely. He eventually became involved in over 40 arts organizations throughout the U.S. and abroad.

Hirst Milhollen was born in Loudoun County, Virginia and came to Washington with the intention of working with a plastering company. Due to parental intervention, however, he enrolled in George Washington University. He soon got a job at the Library of Congress in the Prints and Photographs Division where he remained throughout his career. Perhaps it was there he became inspired by the medium of etching. Milhollen also studied painting with noted Washington landscapists Lucien Powell and Felix Mahoney until 1929, and later at the École des Beaux-Arts in Paris. He traveled throughout Europe and made drawings and etchings of scenic buildings and views. After his return, Milhollen joined the Society of Washington Etchers and served for a time as its president. As a member of the Society, he exhibited his prints alongside those of the older artist Benson Bond Moore. Milhollen was fond of Whistler’s etched works and owned Whistler’s popular French Set, a series of twelve views created in 1857-61. Milhollen published two books: Best Photos of the Civil War (1961) and Presidents on Parade (1948). He also co-edited the Library of Congress journal A Century of Photographs, 1846-1946.

The Chesapeake & Ohio Canal is a man-made waterway created to expand and facilitate commercial navigation along the Potomac River. Completed in 1850, the canal is 184.5 miles long and runs from Georgetown to Cumberland, Maryland. With its gradual rise in elevation up to 605 feet, the canal required seventy-four locks along the way to transport vessels up and down stream. The last use of the canal for commercial enterprise was in 1924. 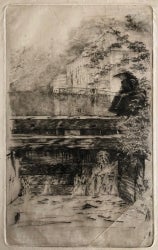 Margaret White Lesley Bush-Brown (1857-1944) was encouraged by her parents to pursue an artistic career. A native of Philadelphia, she studied at the prestigious Pennsylvania Academy of Fine Arts and later in Paris at the Académie Julian, where a number of expatriate Americans pursued their training. Margaret Lesley learned the technique of etching from Gabrielle de Veaux Clements who attended the same academies in Philadelphia and Paris. Her first etching, Study of a Girl’s Head, was exhibited at the New York Etching Club in 1884.

This rare etching of a woman fishing from the C & O Canal was created around the time of Lesley’s move to Washington, DC and her marriage to sculptor Henry Kirke Bush-Brown. She had an understanding with her husband that she would be allowed to continue in her artistic endeavors after their marriage, which at the time was not commonly practiced. Margaret Lesley evolved within a select circle of women painters including Cecilia Beaux and Ellen Day Hale. Among the highlights of her career, she painted a mural for the World’s Columbian Exposition in Chicago in 1893, and was honored with a retrospective at the Corcoran Gallery of Art in 1911.

Commerce on the C & O Canal

Eleazer Hutchinson Miller (1831-1921) was born in Shepherdstown, West Virginia into a family of artisans. He showed early talent in drawing portraits and at the age of seventeen moved to Washington, D.C. to pursue formal art training. To subsidize his studies, Miller worked for a local newspaper, The National Intelligencer. He became an established portrait painter among high society and also illustrated several books with his etchings. In his 1921 obituary in The Washington Star at the age of ninety, he was recognized as “the first artist of national reputation to establish his home and studio in Washington.” 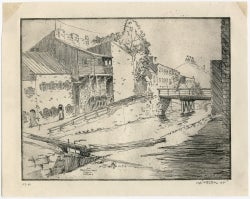 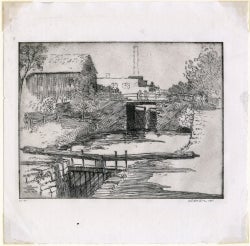 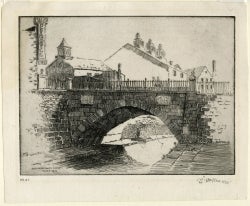 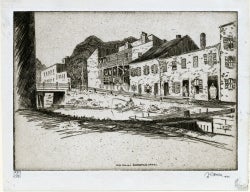 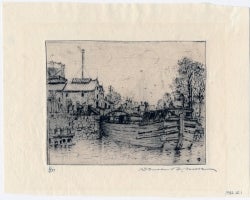 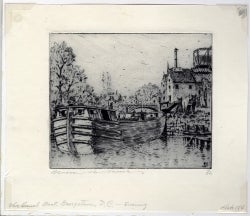 The artist was clearly fond of this scene as he has basically flipped the image in the previous print. There are very subtle differences between the two. This one does not include a man standing in the boat. 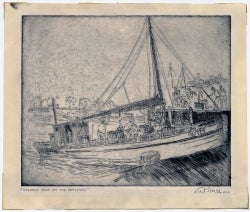 Fishing Boat on the Potomac River 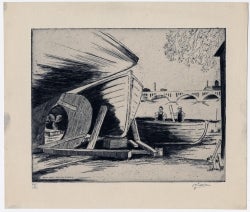 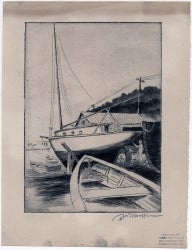 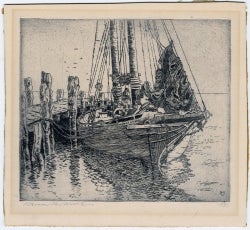 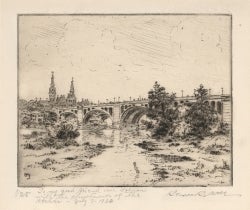 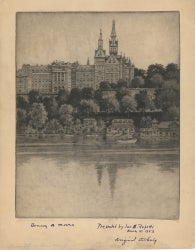 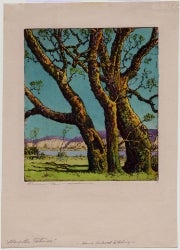 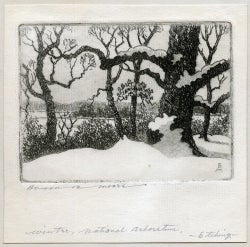 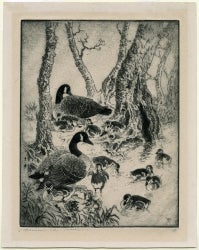 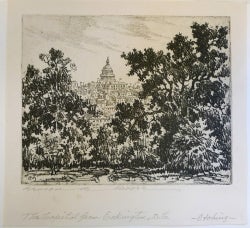 The Capitol from Eckington, D.C. 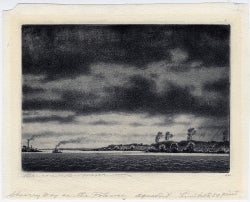 Showery Day on the Potomac 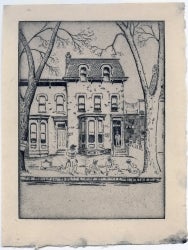 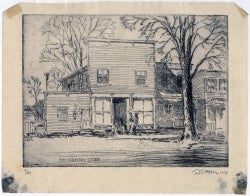 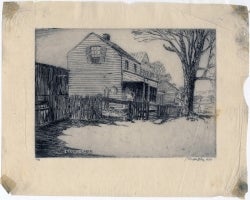 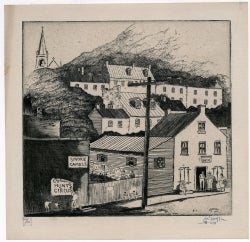