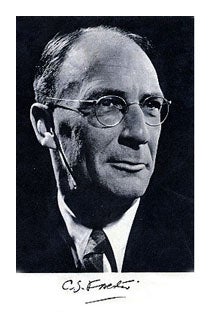 The creator of Horatio Hornblower was born Cecil Lewis Troughton Smith on August 27, 1899, the son of a minor English official in the Egyptian Ministry of Education. After his death on April 2, 1966, the obituary of C. S. Forester (who started his literary career as Cecil Scott Forester in 1921) began on the front page of The New York Times, and some 8,000,000 copies of his works had been published.

Before Hornblower, Forester's career was that of a good, if not particularly successful, novelist and miscellaneous writer. Payment Deferred (1926), his first book to achieve multiple printings, also brought him his first sale of film rights; The African Queen (1935), later to be, because of the film starring Humphrey Bogart and Katherine Hepburn, the best-known of his non-Hornblower novels, began its published life as a five-part newspaper cliffhanger serial. The General (1936), one of his best-written books, achieved far greater fame (and made its author far more money) in Hitler's Germany than it did in Britain or America. Indeed, the dust jackets of two of the first three books he saw published in America gave his initials incorrectly, the first as "B. S." and another as "C. E."

In 1937 came the great invention: the introverted, self-doubting English sea captain who would make Forester's name in the world of popular literature, Horatio Hornblower. But sales of the first three Hornblower titles were modest by the standards Forester would later reach, and even though the second and third were serialized in American pulps prior to publication, they failed to reach a true mass audience. The publication of a boxed three-volume set of the Hornblower books by the Book of the Month Club in 1940 "made" Hornblower in America, and from the publication of Commodore Hornblower (or as it was titled in England, The Commodore) at the end of World War II, with prior serialization in The Saturday Evening Post, the appearance of each Hornblower novel or book of stories was the result of a carefully orchestrated and highly remunerative publishing campaign, with both prior and secondary serial rights sold, book club publication assured.

This exhibit presents, with only a few additions, the first British and American editions of all of Forester's books, including those published posthumously. It deliberately ignores the Canadian editions, the Australian editions, the Indian editions, the English-language editions published in Sweden and Germany, and the translations into foreign languages, all of which helped bring many a quid into the author's coffers. No formal bibliography of Forester's works exists, though many are the collectors who would welcome one; a century after his birth, perhaps the time for one has come. All books displayed are drawn from the Georgetown collection of his works.

A Pawn Among Kings

London: Methuen & Co. Ltd. [1924] First edition; inscribed on front pastedown "With the compliments of C. S. Forester." There was no American edition of this title. Toronto: The Macmillan Company, 1924. First edition, Canadian issue, one of approximately 260 copies.

Napoleon and His Court

London: Methuen & Co. Ltd. [1924] First edition. There was no American edition of this title.

London: John Lane The Bodley Head Limited [1927] First edition. Indianapolis: The Bobbs-Merrill Company [1927] First American edition, in dust jacket. On both the binding and the dust jacket Forester's initials are given as "C. E."

Victor Emmanuel II and the Union of Italy

The Shadow of the Hawk

The Voyage of the Annie Marble

London: John Lane The Bodley Head Limited [1929] First edition. There was no American edition of this title.

The Annie Marble in Germany

London: John Lane The Bodley Head Limited [1930] First edition, in dust jacket. There was no American edition of this title.

London: John Lane The Bodley Head Limited [1931] First edition, in dust jacket. There was no American edition of this title.

Death to the French

London: John Lane The Bodley Head Limited [1932] First edition. New York: The Press of the Readers Club [1942] First American edition, in dust jacket; published under the title Rifleman Dodd in a volume published as Rifleman Dodd and The Gun: Two Novels of the Peninsular Wars. Barbosa. Original ink and watercolor drawing for the dust jacket of the English edition.

London: John Lane The Bodley Head Limited [1933] First edition, in the original wrappers. There was no American edition of this title. Written in collaboration with C. E. Bechhofer Roberts.

London: Michael Joseph Ltd. [1936] First edition. A purported American "edition" of this title, consisting possibly only of unsold sheets of this edition with a printed slip pasted on the title page, has not been located. London: Michael Joseph Ltd. [1936] First edition, in a later binding, in dust jacket. Inscribed by Forester on the front free endpaper: "Elizabeth Brown secretary & barber & good at both, with grateful good wishes from C. S. Forester." Elizabeth ("Betty") Brown served as Forester's secretary for a number of years.

Ship of the Line

The Captain from Connecticut

Poo-Poo and the Dragons

Boston: Little, Brown, and Company, 1943. First edition, in dust jacket (designed by Tom Lea). Inscribed before publication by Forester on the front free endpaper: "Betty Brown, with much gratitude, because without her help I don't think I could have written this any faster. C. S. Forester. April 1943." London: Michael Joseph Ltd. [1943] First English edition, in dust jacket.

Toronto: S. J. Reginald Saunders [1944] First edition, in dust jacket. Inscribed by Forester on the front free endpaper: "To Betty Brown, Maybe she still wears the scar, but I'm not sure C. S. Forester." "The scar" refers to the principal incident in the title story. This collection was never published in England or the United States.

The Sky and the Forest

Randall and the River of Time

Hornblower and the Atropos

The Adventures of John Wetherell

[New York: Life] 1955. "Advance Galley Proofs" of the novel as it was condensed to some 35,000 words to appear in consecutive issues of Life on March 14 and March 21, 1955, in the same manner as had Ernest Hemingway's The Old Man and the Sea a few years previously. Boston: Little, Brown and Company [1955] First edition, in dust jacket. Inscribed by Forester on the front free endpaper: "Betty The only person I can be sure read every single word with every good wish from C. S. Forester." London: Michael Joseph [1955] First English edition, in dust jacket.

The Age of Fighting Sail

Admiral Hornblower in the West Indies

The Last Nine Days of the Bismarck

Hornblower and the Hotspur

Hornblower and the Crisis

The Man in the Yellow Raft

Tacoma: Published for the Richard Bolitho Association by the Non-Profit Press [1976] First edition, in dust jacket. Copy #21 of 25 (of a total edition of 350) printed on special paper and signed by Alexander Kent. With a copy of the special keepsake (#21) prepared for the publication party in 50 copies. With copy #53 of the "regular" edition.