The Marino Family International Writers' Academic Workshop 2018: Do Not Say We Have Nothing

A companion exhibition to the Workshop, which this year features Madeleine Thien's novel Do Not Say We Have Nothing. 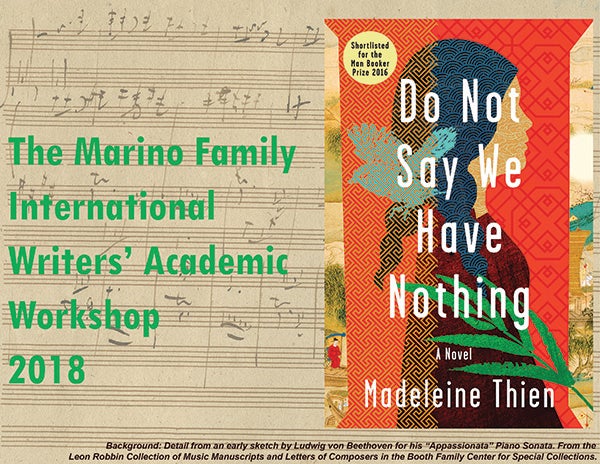 Do Not Say We Have Nothing First Editions

Mao's Talks at the Yan'an Conference

"The previous night, Zhuli had stayed awake rereading Chairman Mao’s talk on art and literature, but each time she felt a truth might be appearing, it muddied and broke away. The Chairman’s words were elegant, perfectly sharp, but when they touched her thoughts, they became crooked. Unable to sleep, she had written a long self-criticism, but it was not the kind that the Party demanded. Instead, the same reactionary words kept rising to the surface and dirtying the page."

Bonnie S. McDougall, Mao Zedong’s “Talks at the Yan-an Conference on Literature and Art”: A Translation of the 1943 Text with Commentary.
Lauinger Library Stacks NX583. A1 M3634.

Selections [in facsimile] from a postcard collection of 16 Chinese paintings, issued to commemorate the 30th anniversary of Chairman Mao’s “Speech at the Yan’an Forum on Literature and Art”, 1973.

“[Sparrow] felt the thinness of the strings and the fragility of the violin’s body. What music would best suit an instrument of this pedigree and seniority, he wondered. He wiped the strings down and considered the possibilities. Finally, he lifted he instrument and played the opening aria from Handel’s Xerxes, and then Mendelssohn’s ‘Song Without Words.’ The violin was worldly-wise and expressive.”

Felix Mendelssohn, "Ich wollt' meine Lieb' ergösse sich" from 6 duets for 2 sopranos and piano accompaniment (opus 63) [in facsimile]. Copyist manuscript with title page signed by the composer. Original manuscript is in the Leon Robbin Collection of Music Manuscripts and Letters of Composers in the Booth Family Center for Special Collections.

Carbon copy [in facsimile] of a letter from President Bunn in response to an appeal from Dr. Karl T. Compton on behalf of the organization Aid Refugee Chinese Intellectuals, Inc., March 4, 1953. Father Bunn notes that four Chinese refugee students will shortly be enrolling in the School of Foreign Service. From the Georgetown University Archives, Students 1929-1958, Box 1, Folder 5.

“The first aria of the Goldberg Variations was also its end. Could it be that everything in this life had been written from the beginning? She could not accept this.”

Find the Research and Course Guides on the Library’s website, and browse resources by subject and format, including guides for China Studies, Music, Mathematics, Foreign Affairs and Policy, International Migration and Refugees, and Asian History.