Art historians and print curators describe Piranesi as the greatest designer and innovator in the art of printmaking in the 18th century. I am a printmaker, master printer, and I teach Printmaking for the Art and Art History Department at Georgetown University.

When I was a student, my printmaking teachers praised Giovanni Battista Piranesi as one of the great print masters. Specifically they spoke of the Carceri or “Prison” images. The prints were gestural, mysterious, fantastic in design and surreal. I was incredibly lucky to have the teachers I had at university and I became a teacher myself because of influence they had on me. But Piranesi was the one printmaker I didn’t get. What were they raving about? I could see the gesture, the fantasy, the bridges going nowhere, but Piranesi didn’t affect me the way Ecce Homo (Rembrandt) and Black Lion Wharf (Whistler) did.

Why didn’t I appreciate Piranesi then? Perhaps it was because all the images I saw at first where 4 by 6 inches or smaller on the glossy pages of an art history book. They were visually flat and they still are today if you see them that way. I’m sure I saw examples of his work at the National Gallery from time to time but I didn’t really see Piranesi until I came to Georgetown five years ago. It was then I met Georgetown’s late curator of fine prints, Father Joseph Haller, who introduced me to the Special Collections room on the 5th floor in Lauinger. He admonished me not to miss looking at the Piranesi housed in the stately folios at the rear of the reading room in Special Collections. I said I would, but sadly it wasn’t until after his death in 2008 that I finally sat down to peruse the images in those folios of which there are twenty-one. I am currently through fourteen of them.

My greatest regret is that Father Haller is not here to hear me rave about the incredible facility of this man Piranesi. Opening each folio leaf reveals a competence, a skill that is almost indescribable. As a result of seeing these prints first hand, holding them, seeing the raised texture of the etched lines on the paper, I now consider Piranesi among the greatest of printmakers. I’m sure Father Haller and my teachers are nodding in an “I told you so” manner.

As visitors to this exhibition, you have an opportunity to see for yourself why such praise is bestowed on Giovanni Battista Piranesi.

Giovanni Battista Piranesi (1720 – 1778), the preeminent topographical etcher and graphic designer who produced more than 1,000 individual etchings, was the son of a stonemason and master builder. Born near Venice where he studied architecture and theater design, Piranesi first moved to Rome in 1740 as a draftsman to the Venetian ambassador, where he became fascinated with the ruins of ancient buildings that proliferated throughout the city.

As he later wrote:

When I saw in Rome how most of the remains of ancient buildings lay scattered through gardens and ploughed fields where they dwindled day by day … I resolved to preserve them by means of engravings. I have therefore drawn these ruins with all possible exquisiteness.

At the age of 28, Piranesi produced his first printed views, a group of 28 small etchings of Triumphal Arches and Other Monuments.

This exhibition highlights his most famous etched series, the 135 large Vedute di Roma (Views of Rome) which Piranesi worked on from the late 1740s until shortly before his death in 1778. These tremendously popular Italian views were circulated throughout Europe and England, helping establish Italy as the primary destination for the dilettante’s Grand Tour. However, many of Piranesi’s younger contemporaries, including Goethe and the English sculptor John Flaxman, were disappointed when they saw the actual sites, which did not live up in their minds to the majestic scale and grandeur of Piranesi’s landscapes, often embellished by theatrical artifice.

The Works of Giovanni Battista Piranesi

This is a representative volume of the Library’s complete set of Piranesi’s etched works, bound together in 21 large folio volumes. The Vedute di Roma, displayed in this exhibition, are bound together in volume 8. Published in Paris by Firmin Didot in 1835-39, the 21-volume set was once in the personal Library of Pope Gregory XVI. The volumes are available to researchers in the Special Collections reading room. They were donated by William Doniger in memory of Katherine Dimock Doniger.

The etchings displayed in this exhibition are from an earlier edition on heavy, laid paper (as opposed to wove in the Firmin Didot volumes), donated to Georgetown by a Miss Etta Brent.

The Arch of Constantine 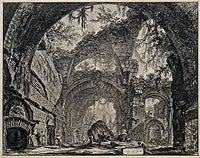 Hadrian's Villa: The Central Room of the Larger Thermae 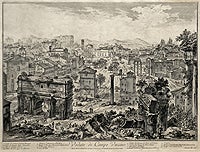 The Forum Romanum, or Campo Vaccino, from the Capitol 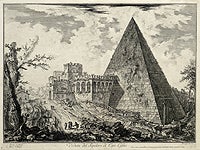 The Pyramid of Caius Cestius, with the Porta San Paolo and Adjoining Road

The Temple of Vespasian

The So-Called Temple of Hercules, at Cori 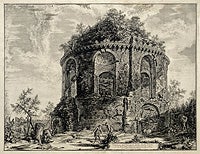 The Fontana di Trevi: Side View

San Sebastiano Outside the Walls