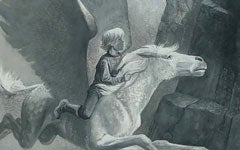 The University Art Collection has loaned an original illustration by Lynd Ward (1905–1985) to the Eric Carle Museum for the exhibition Speechless: The Art of Wordless Picture Books.

The artwork on loan is an illustration for The Silver Pony (Houghton Mifflin, 1973) about a boy who dreams of riding on the back of a winged pony into outer space. The book was awarded the Lewis Carroll Shelf Award and the Children's Book Showcase Award, and was named an honor book in the Boston Globe’s Horn Book Award.

Lynd Ward was a prolific, mid-century book illustrator, often collaborating with his wife, author May McNeer. Ward is widely acknowledged as a pioneer of the graphic novel in the United States, with his groundbreaking wordless novel Gods’ Man (1929) followed by five more in the genre the following decade, all illustrated with masterful black and white wood engravings inspired by the work of German artist Frans Masereel (1889–1972). The Library holds one of the largest institutional collections of Ward’s artwork—more than 2,000 paintings, drawings, prints, sketches, and proofs donated by the artist's daughters in the 1980s. They have been showcased in four Library exhibitions from 1983, 2001, 2005, and 2016, all of which are archived on the Library’s website.

Speechless is curated by David Wiesner, who has written and/or illustrated some thirty books for children, three of which have been honored with a Caldecott Medal awarded annually to the most distinguished American picture book for children. Speechless will showcase twenty-two titles and span almost a century of wordless picture books.

Wiesner’s encounter with Lynd Ward’s second wordless novel, Madman’s Drum (1930), in his sophomore year at the Rhode Island School of Design had a career-defining impact. His roommate at RISD brought him to the special collections at Carnegie Mellon University Library in Pittsburgh, where he held a first edition of Madman’s Drum. He was overwhelmed with the beauty of the book as an object. “The paper, the ink, the binding—I loved holding it and turning the pages. Aside from the story, it was the fact that this emotionally complex story was being told solely through pictures that astounded me,” he said. Wiesner started researching wordless novels and has accumulated a collection of first editions focused on early wordless books of the 1960s.

Wiesner had visited Georgetown’s Special Collections in the spring of 2018 to study some of Ward’s wood blocks and illustrations. It was then that he saw the Silver Pony watercolor. When he was invited by the Carle Museum in March of last year to curate an exhibition, he already had this work in mind. The Silver Pony was Ward’s only wordless picture book for children.

Wiesner explained that wordless picture books enable children to “be a partner in the storytelling process, which is very empowering.” Also, researchers in literacy have discovered that when parents engage children in “reading” from wordless books there is greater opportunity for free-flowing discussion which contributes to building vocabulary and critical thinking in the child.

Viewers may access the Silver Pony illustration on the art collection’s database, or in person at the Carle Museum from July 17 to December 5th of this year. Located in Amherst, Massachusetts, the museum was founded in 2003 by the late children’s book author Eric Carle to “foster connections between visual and verbal literacy” and to celebrate the genre of the picture book through exhibitions and programs. Researchers are also encouraged to visit Special Collections to see more of Ward’s work by contacting speccoll@georgetown.edu.