Women’s History Month in the Archives 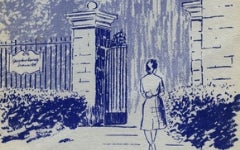 As we celebrate Women's History Month, the Georgetown University Archives is looking back on the decision to admit women to the College of Arts and Sciences in 1969. Since the opening of the School of Nursing in 1903, women have continuously formed part of the Georgetown student body. However, it was not until 1969, 180 years after the University's founding, that the College of Arts and Sciences opened its enrollment to women as well as men. The College was the last of the schools at Georgetown to admit women and the move came as part of a deliberate effort to increase undergraduate numbers without diluting the quality of students. Below are some records documenting how and why the decision to admit women was carried out. 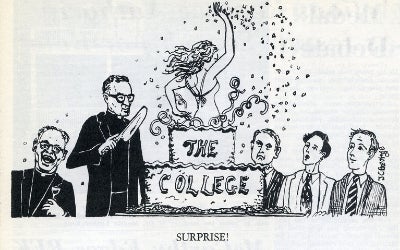 At the time this cartoon appeared, the idea of admitting women to the College was being seriously considered on campus. An editorial in the same issue of The Hoya notes that: Actually the College is all male only in a limited sense. Already most classes have girls in them, usually from the East Campus [the Schools of Business, Foreign Service and Languages and Linguistics], something that amounts to a kind of underground co-education . . . If for all practical purposes, they are here, and they are, then the College should go ahead and accept girls formally. 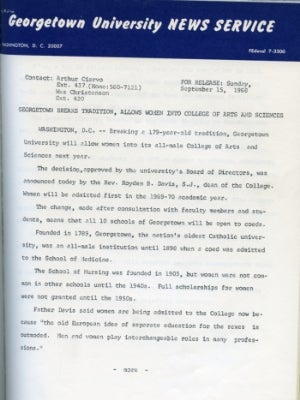 After University administrators consulted with faculty, students and alumni, final approval for the admission of women to the College was given by the Board of Directors at their August 1968 meeting.

Extract from the College of Arts and Sciences Annual Report, 1968-1969 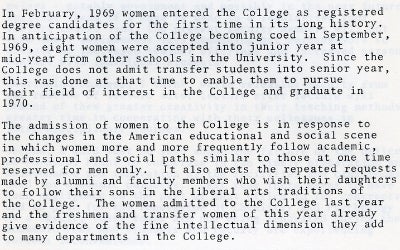 The introduction of women students into the College began in spring 1969 when a small number of women enrolled in other Georgetown schools were allowed to transfer in. 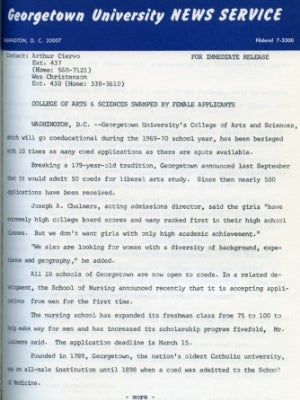 The College, which planned to accept up to 50 women, received over 500 applications for those 50 spaces. 51 women ultimately enrolled in the fall of 1969. 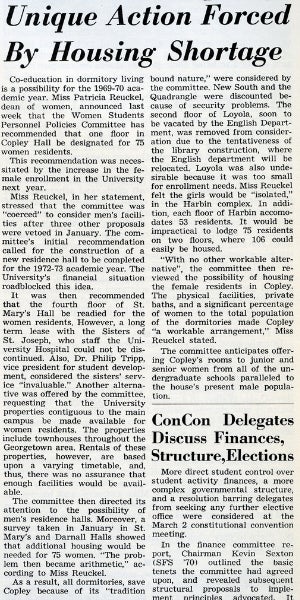 One of the challenges of increasing the number of women students on campus was that there was finite space in the women's dormitories (St. Mary's and Darnall.) As a result, other housing options had to be considered. 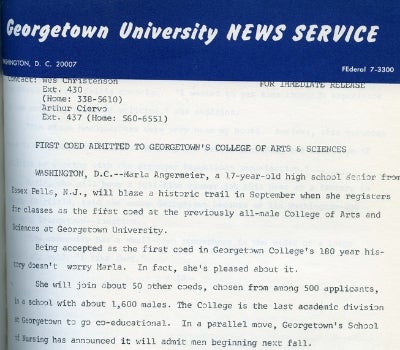 Such was the interest in the College's decision to admit women, the University produced a press release to publicize that the first woman had been admitted as a freshman. 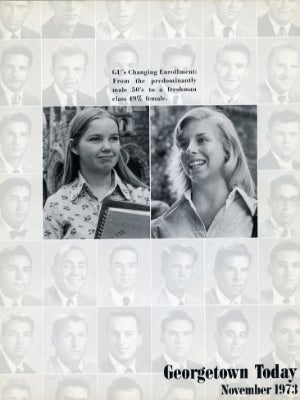 The College Class that entered in 1974, the year following this issue of Georgetown Today, was the first to have a women’s majority, with a freshman class composed of 654 women and 617 men.