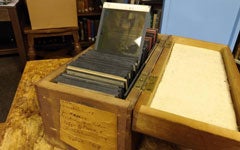 Thousands of glass plate lantern slides created by an early Jesuit photography expert, held in storage for nearly a century, will be preserved for future researchers thanks to a project currently underway in the Woodstock Theological Library.

Glass plate lantern slides were an early form of photography, and were used for both entertainment and education. Most of the more than 3,000 slides in the Woodstock College Archives were shot, developed, and hand-colored by John Brosnan, S.J., the Maryland Province’s resident photographer. Brosnan was renowned for his skills, publishing articles on the process for the Bulletin of the American Association of Jesuit Scientists. 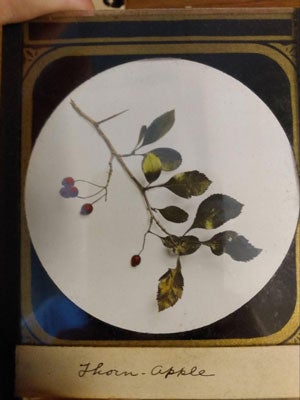 One of Brosnan’s original slides, showing a Thorn-apple from near Woodstock, Maryland.

The slides form a disparate collection. Brosnan documented the people and places of the Maryland Province, and was particularly enamored of the wildlife around Woodstock, Maryland. The collection also includes a small number of slides from outside photo companies. Many were used for class lectures on the Middle East, China, geology, botany, and astronomy.

These slides are frequently beautiful, and they also contain a wealth of information for scholars on the Maryland Province and Jesuit pedagogy. But most of the slides are more than 100 years old, and like all early photo material, they could suffer irreversible deterioration if not cared for properly. 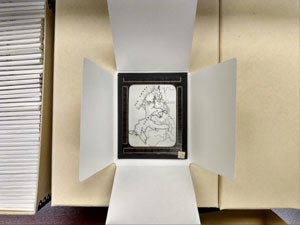 A slide mounted in one of the new, acid-free enclosures, which will protect it from deterioration.

The immediate threat to these slides is their original wooden storage boxes. Wood is slightly acidic, and those acids can eventually deteriorate the slides. To prevent that, Woodstock Theological Library Archivist Adrian Vaagenes is rehousing the slides in specially created, acid-free paper enclosures, which are themselves stored in chemically safe cardboard boxes. This is a slow and delicate job, because some of the slides have cracks or chips from poor handling in the past.

The Library is also creating a spreadsheet with the details about each slide, such as its subject, creator, and creation date. This will make it easier for future scholars to use the collection.

April 25–May 1 is Preservation Week, an American Library Association observation that highlights the need to preserve historic artifacts both in libraries and in personal collections.