In celebration of Women's History Month, we are introduced to four religious sisters who received bachelor's degrees from Georgetown University in 1925.

In the first decades of the 20th century, Georgetown University was conferring degrees upon religious sisters.

While this was relatively unusual at the time, degrees were awarded to Sisters of the Visitation of Holy Mary from neighboring Georgetown Visitation Preparatory School, and to the Sisters of Saint Francis (SSF or OSF), who administered Georgetown’s hospital and nursing school.

For instance, almost 100 years ago, in 1925, four religious sisters received their bachelor’s degrees at Georgetown. Sister Rosaline Doyle (OSF), Sister Josetta Frank (OSF), and Sister Rosella Delaney (OSF) received the bachelor of arts degree. Sister Flavia Egan, likely with the Sisters of Charity of St. Vincent de Paul, earned the bachelor of science degree in nursing. While the women’s names were not included in the 1925 Commencement program, they were recorded as graduates of the College in the published alumni directory of 1957.

When Sister Rosaline reached 100 years of age, a contemporary campus publication, Georgetown Today, ran an article, “At 100, Her Service Continues,” written by student Steven Lauria (SFS’75). Georgetown Today is available in the GU Archives. Lauria’s January 1974 article begins, “On December 1, Sister M. Rosaline Doyle, O.S.F. (C’25) did something few others have done: she celebrated her 100th birthday. Sister Rosaline, one of the first four women religious to receive a degree from Georgetown, has been a member of the Order of St. Francis since 1890, when she entered the novitiate at the age of 16.” Rediscovering Sister Rosaline’s place in Georgetown history resulted from recent archival sleuthing done by archivist Ann Galloway while researching an inquiry from Bill Cessato. 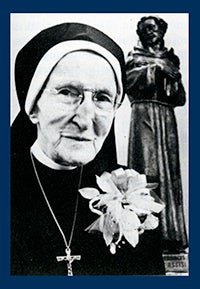 First, Galloway found—in an official Georgetown record in the GU Archives—that a Sister Flavia Egan had received the bachelor’s degree at Georgetown in 1925. Further official records searches revealed that University leadership, in 1925, had approved College coursework and the conferral of bachelor’s degrees for the sisters. “The question of conferring degrees upon the sisters was considered,” a contemporary record reads. “Because of the peculiar situation at the time, the following sisters were allowed by the President [and] Directors of Georgetown College to enter our college courses [and] have completed the requirements for a degree[.]” (It remains unclear what the “peculiar situation” was, but the document did name the four women, albeit with a couple misspellings.) 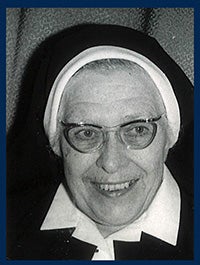 The Sisters of Saint Francis of Philadelphia Archives in Aston, Pennsylvania provided copies of biographical, news (including a copy of the Georgetown Today article), and other materials about Sisters Josetta, Rosaline, and Rosella (see photo of Sister Rosella, left). According to the biographical material, Sister Rosaline (1873-1975), received a master’s degree in English from Villanova University in addition to her Georgetown B.A. Sister Rosella (1901-1985) went on to earn a master’s degree (thesis: “Demonstrative Pronouns in Late Latin”) and a Ph.D. (dissertation: “A Study of Clausulae in the Works of St. Ambrose”), both from The Catholic University of America. (Thanks to the CUA archives for confirming the degrees and sending the project titles.)  An obituary for Sister Josetta (1895-1965) in the North Adams (Massachusetts) Transcript noted, “She received her high school and college training at the Mother House . . . .”  Lastly, Sister Flavia (1877-1935, per a biographical outline provided by the Daughters of Charity in Emmitsburg, Maryland) served as the principal of St. Vincent’s Hospital’s School of Nursing in Bridgeport, Connecticut, according to obituaries in the Scranton (Pennsylvania) Republican and an unsourced news article preserved by the Bridgeport History Center. (Reviewed sources mention no Georgetown connection, so it is possible this is not the same person. However, in terms of timing and location, a December 1925 article in The Washington Post does list a Sister Flavia on the nursing staff at Providence Hospital in D.C. The biographical sheet and Scranton newspaper obituary place her at this facility as well.) 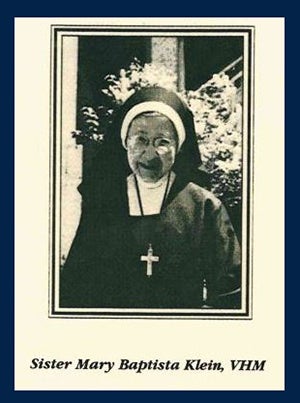 While it is unclear if the four women religious attended College classes with men on the University’s campus, it is important to note that they were not the first sisters to receive Georgetown degrees. (That said, Sister Flavia may be the first person to have received a bachelor’s degree in nursing – something that would need to be investigated with more research.) Sisters from Visitation had already been receiving instruction from Georgetown professors at their monastery—adjacent to the university’s campus—and produced their first bachelor’s graduates in 1919.

“We were strictly cloistered during those days, and professors from Georgetown would come over and would teach a sister (or sisters) from behind a grille,” explained Sister Mada-anne Gell, VHM, the monastery archivist at Georgetown Visitation. “It was usually just one sister at a time in a class, but the Visitation rule required that no one sister could be with a man alone, so another sister was always assigned to be present in the class as well,” she noted. “No other sisters of any order accompanied them.”

The sisters received bachelor’s, master’s, and doctoral degrees, and one, Sister M. Baptista Klein, is listed in the 1935 Commencement Program as having received a Master of Arts in English.

Additionally, two Georgetown-educated nurses who were members of the Sisters of Saint Francis—Sister Mary Euphrasia Markham (Diploma 1920, John Carroll Award 1957) and Sister Joanilla Knott (Diploma 1916)—were recorded in the 1957 alumni directory as having received bachelor’s degrees in nursing at Georgetown in 1926. The women were not included in the 1926 Commencement program. Other sources—such as newspaper accounts and advertisements, archival records, and a written history of the nursing school by Dr. Alma Woolley—collectively seem to indicate that the two women, who were nursing school administrators, held their bachelor’s degrees.

Certainly, Georgetown’s conferral of degrees upon women religious in the early decades of the 20th century is an area that merits much more thorough research, to gain a better understanding of the women’s biographies, the timelines and “firsts,” and how instruction itself occurred.