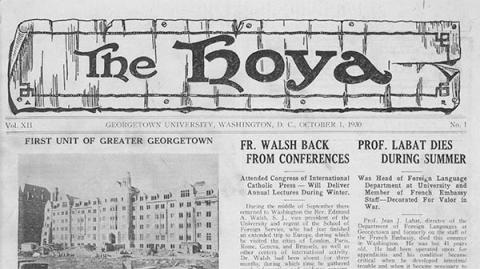 The Hoya has been Georgetown University's newspaper of record since 1920. The digital collection of The Hoya in DigitalGeorgetown contains back issues for the period 1920-1999, and reflects Georgetown students’ perspectives on campus events and, at times, local and national events during the 1960s and 1970s.

The first issue of The Hoya appeared on January 14, 1920, under the editorship of Joseph R. Mickler, Jr. Student journalism at Georgetown can be traced as far back as 1824 and the appearance of a hand written and hand copied publication titled Minerva. The Hoya, however, was distinguished from previous student publications by its intent to be a comprehensive University newspaper, with coverage of the professional schools (at that time, Law, Dental, Medical, and Foreign Service) as well as the College of Arts and Sciences. The intent to be comprehensive was reflected in the choice of the paper’s name, as the word “Hoya” was not exclusive to any group on campus. Of obscure and debated origin, the word formed part of a well-known Georgetown yell (or cheer): Hoya, Hoya, Saxa! Hoya, Hoya, Georgetown! – Hoya! Less than a decade after the founding of the newspaper,“Hoya” began to be applied to Georgetown athletes and teams, both on and off campus – a process that was undoubtedly accelerated because the name of the newspaper was often cited by sportswriters covering Georgetown sports.

Weathering the Depression, World War II, student unrest in the 1960s, and funding cuts in the 1970s, The Hoya has appeared more or less continuously since its founding, providing a student perspective on issues and events, trends and controversies, decisions and policies, on campus and sometimes beyond, that have impacted and molded the university and those associated with it.

In its early years The Hoya, published once a week, focused mainly on internal campus affairs, promoted student organizations and school functions, and devoted a large part of its coverage to sports. The quality of reporting was such that in 1930 the paper received the highest rating given to a college weekly publication by the National Collegiate Press Association. Initially, the paper displayed no political or ideological leanings. This changed in the mid-1930s and from 1939 to 1941 editorials strongly advocated a neutral stance for the U.S. At the same time, international events began to flavor news stories. After December 7, 1941, Allied war efforts were supported unreservedly. The Hoya was one of the few student groups to remain active during the war years and its pages at this time juxtapose coverage of blood drives, war bond programs and alumni casualties with details of tea dances and intramural athletics.

In the post-war era, the paper’s focus returned to internal campus issues, perhaps reflecting the desire of veterans who made up most of the student body to return to normal life. The 1950s saw the introduction of two recurring features: the Basketball Preview Issue, which first appeared on December 3, 1957, and the April Fools’ issue. The first April Fools’ issue appeared in 1954 reporting among other things that Mount St. Mary’s College, Emmitsburg, Maryland, had recently been discovered to own the Georgetown campus and that five extra days had been added to the Easter vacation.

This decade saw major changes for both the paper and the campus. In 1964, The Hoya announced that it would accept editorial candidates from outside the College in an attempt to broaden its campus perspective. The same year the paper resigned its seat on the Yard (the College student government), stating that it could not objectively report on a body to which it belonged. Women joined the paper, first as office staff, then as copy and news staff. In 1966, they achieved representation on the editorial board, although it was not until 1972 that the first female editor-in-chief, Bernadette Savard, was selected.

These changes to The Hoya presaged two significant changes on the campus as a whole. In 1969, three distinct student governments (one for the Nursing School, one for the Schools of Foreign Service, Business Administration, and Languages and Linguistics, and the Yard for the College) were unified into one and Georgetown became fully coeducational when women were admitted to the College. Developments in both areas can be tracked in the paper. The late 1960s also saw a growth in efforts to recruit minority students, and articles in The Hoya begin to reflect their attitudes and activities.

But, even in the midst of change, The Hoya’s editors continued to focus primarily on campus news and events – a stance motivated both by tradition and by the belief the paper lacked adequate staff to cover off-campus events. Those who consult The Hoya will not find reaction to the election or inauguration of John F. Kennedy (who had once lived only three blocks from campus), the Tet Offensive, or the Woodstock Festival. Even when off-campus events are alluded to, it is from a campus-based perspective. For example, the assassination of President Kennedy is not reported, although the December 12, 1963 issue does contain a tribute to him. And mention is made in the March 26, 1965 issue of the civil rights protests in Alabama but in the form of an account of thirteen Georgetown students who traveled south to participate. The paper did report on the Vietnam War and associated issues but only as far as they impinged on the university.

This editorial stance led to debate, both internal and external to the paper, over what its focus should be. A faction of students demanded that it provide more coverage of anti-war protests, accusing the editors of being too conservative and not adequately reflecting student opinion. One result of this debate was the founding of another student newspaper, The Georgetown Voice, which first appeared on March 4, 1969, promising to “present and analyze national and local issues of concern to the student, whose concern should spread beyond the campus.” The Hoya, despite significant pressure to disband – including the burning of hundreds of issues on March 6, 1969, by student protestors singing “This Will Be The Last Time”– continued publication.

Any description of The Hoya’s content from the 1960s cannot be complete without reference to a second U.S. president, William Jefferson Clinton, who enrolled in Georgetown’s School of Foreign Service in 1964. A number of articles between 1964 and 1968 chronicle his campaigns, both successful and unsuccessful, for positions in student government and his work in that arena.

In the 1970s, University financial support for the paper fell significantly; funding was cut, for example, more than 55% between 1971 and 1975. As a result, the newspaper was forced to increase its advertising fourfold and full page advertisements became common. The paper changed its format from tabloid to broadsheet in the fall of 1976.

As the Georgetown student body became more diverse, coverage of minority student groups increased and articles on the activities and concerns of African American and the Jewish students appeared. Women’s athletics received more detailed coverage, as did the impact of Title IX, and, by the end of the decade, references to “girls” and “hoyettes” had been eliminated from the sports pages. Issues in the spring of 1973 contain coverage of attempts by gay students to organize and obtain official recognition – later attempts at securing recognition can be followed in articles from 1978 to 1988. No doubt as a corollary to increasing diversity, articles began to appear questioning how “Jesuit” the University actually was.

1973 and 1974 saw a number of articles on the Nixon Administration and Watergate. Coverage of the latter topic is possibly linked to the fact that a number of players in the Watergate investigations had Georgetown connections, including John Dean (a 1965 graduate of the Law School), Samuel Dash (a Law Center professor who was appointed chief counsel to the Senate Select Watergate Committee), and Judge John J. Sirica (a 1926 graduate of the Law school who presided over the original Watergate trial.)

In the post-Watergate era, perhaps influenced by that event, perhaps as a reaction to the paper’s lingering reputation for conservatism, The Hoya began to run some investigative journalism pieces. As a result, the paper went from being viewed as generally supportive of the Georgetown administration to being one of the university’s chief antagonists. The spring of 1977 brought perhaps the most significant example of this when a story about the firing of five resident assistants led to a University hearing about the entire residence life system and, ultimately, to the resignation of both a vice president and a dean.

A number of significant changes to The Hoya’s production occurred during the 1980s. The initial issue of 1980, produced on January 25, was the first to appear without the approval of a faculty moderator, a position which had been a member of the editorial board. And, after six decades of appearing once a week, The Hoya moved to a twice-weekly schedule, beginning in the fall of 1987. Other changes included the adoption of the current Hoya masthead in 1982 and the development of standard typefaces for headlines and copy.

In a departure from the reporting of the previous decade, the paper focused somewhat less on campus politics in the early 1980s – perhaps the student body, and the student reporters, had grown weary of years of turmoil. Coverage of a unifying rather than divisive storyline dominated headlines, on the front pages as well as the sports pages, as the men’s basketball team rose to national prominence and won the NCAA basketball championship in 1984 under Coach John Thompson, Jr. Issues in the 1988-1989 academic year, Georgetown’s Bicentennial year, cover Bicentennial celebrations as well as the controversy surrounding the award of an honorary degree to Ronald Reagan at the Bicentennial Opening Convocation.

The 1990s saw the consolidation of The Hoya’s entertainment coverage into a pullout titled The Guide. The paper already had a long tradition of providing coverage and reviews of both on-campus and off-campus entertainment, with reviews of off-campus plays and movies first appearing in 1929. One of the high points of The Hoya’s entertainment reporting came in 1964, when one of its reporters managed to interview The Beatles, who were in Washington for their first live concert appearance in the U.S. The interview appeared in the February 20, 1964, issue.

The paper’s production became digitized during the 1990s and articles from fall 1998 to the present are available on the paper’s website at: thehoya.com.

Users of this site are reminded that details and facts in The Hoya’s articles, as with any newspaper, should be verified before reliance is placed upon them. Particular caution needs to be exercised over April Fools’ issues which are, by definition, intended to confuse and mislead. Articles in April Fools’ issues and in “regular” issues display exactly the same way when a search is made and the only means for a user to distinguish the former from the latter is by date. As an added complication, however, The Hoya April Fools’ issues did not always appear on April 1, with production dates ranging from March 27 to April 20. The following are the dates of the April Fools’ issues produced between 1959 and 1980 (an issue did not appear every year) :

Scanned copies of The Hoya in DigitalGeorgetown