We're celebrating #AmericanArchivesMonth this October with reflections on the subject from some of our archivists here at the Library.

In honor of American Archives Month for October 2020, I decided to write about one of my favorite documents in the Booth Family Center for Special Collections. Archivists collect, describe, preserve, and make available primary source documents, which are documents that were written or created at a specific time describing events taking place at that time. One of our most compelling documents is a detailed baseball box score from an amateur baseball game played in New York State in 1864. Yes, 1864! The American Civil War was still being fought at that time.

A box score is a list of statistics providing information about how players and teams performed in one game. It summarizes the results of the game. As an avid baseball fan, I was amazed when I first saw this 1864 document. I had not realized that the box score has been part of baseball, the national pastime, for so many years.

The McHarg Family Papers, one of our manuscripts collections, includes three amateur baseball box scores. A manuscripts collection is essentially a collection of personal papers generated by an individual, family, or organization. Several men in the McHarg family from New York State served in the Union Army during the Civil War. Henry King McHarg was a young member of the family, living in Geneva, New York in 1864. His friend C. D. Sheldon, who lived in Albany, New York, wrote letters to Henry describing the amateur baseball games of his team, the Hiawathas. The McHarg Family Papers include five such letters and three box scores. I have chosen to write about the first letter and the box score it contains found in box 1 folder 40 of the McHarg Family Papers.

On September 26, 1864, on page 1 of his letter, Sheldon wrote to Henry informing him about one of his baseball games. It should be noted that the game was played in late September so the team played some games into the cooler weather. Sheldon stated that the “Times and Courier” reported on the game and that the Hiawathas were playing a team named the Alpines. Of course, media coverage of baseball is vast in our own time. 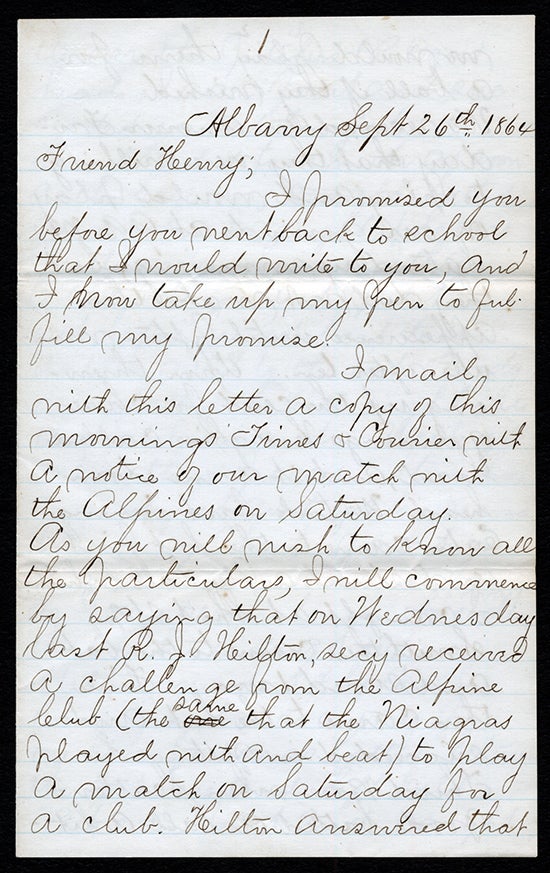 The box score shown below, from page 5 of the letter, documented a 34-25 win for the Hiawathas. The box score can be compared and contrasted with modern, Major League box scores. To begin with, in C. D. Sheldon’s box score, the players’ personal statistics are recorded in neat, uniform columns. Sheldon batted fifth and played shortstop. He had 5 runs and 2 outs. Modern-day box scores always include at bats, runs, hits, and runs batted in, and list each batters’ batting average at the end of the game. They also list extra base hits, including doubles, triples, and home runs. 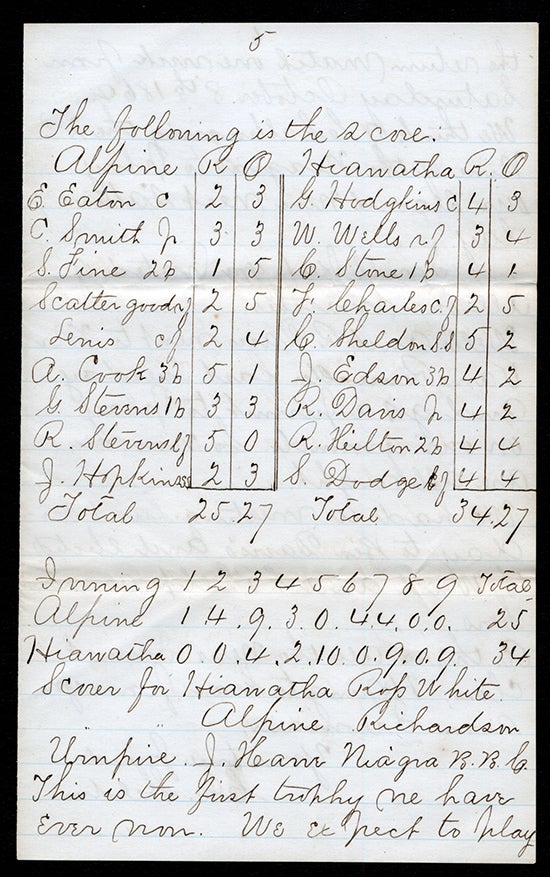 In Sheldon’s box score, both pitchers batted. There were no designated hitters.  In the box score in question, each pitcher also pitched a full nine innings, which rarely happens today. As each pitcher gave up so many runs, their earned run average (number of earned runs allowed per nine innings pitched) would have been astronomical. (The year 2020 is the first season in Major League Baseball that the designated hitter was used in both the American and National Leagues; no pitchers batted this year.)

Statistics have always been important in baseball, and baseball has always been important in American culture. A continuum can be seen from this basic box score in 1864 to modern Major League Baseball analytics, which provide scientific, statistical analysis of players’ performances. This box score shows how it is useful for archives to preserve primary source documents to shed light on the past. One can see the similarities and differences between past events and current ones. Sheldon would have liked to keep this box score to be reminded of his youth. He would probably never have expected that it would provide meaningful information to historians and people of today. That is the value of archives.