Working with manuscript collections over the years, I have become accustomed to the occasional surprising discovery—perhaps an unexpected letter addressed to someone else whose papers I have worked with, or a fragile piece of ephemera that, against all odds, survives to connect us with the past. One manuscript category that rarely fails to surprise is the personal diary. The W.H. Chesson papers, a collection of 11 composition notebooks kept primarily as diaries, is a collection full of surprises; this is about one of those surprises.

In his diaries from 1905, Wilfrid Hugh Chesson recorded an uncanny and difficult few months in his life. The story begins to unfold in the entry of April 5th: “A Markona planchette arrived for Nora. I experimented with it without success.” The planchette, a tool developed in the mid-nineteenth century to assist spiritualists in communicating with the spirit world or afterlife, had become quite popular by the end of the century. The planchette is still in popular use today in the form of the pointer used with the Ouija board, though these planchettes no longer produce automatic or “spirit” writings. Chesson and his wife had won their particular model in a magazine quiz-game, and they approached its use as something of a parlor game. While there are manuscript collections of prominent spiritualists and mediums in North America and the United Kingdom that contain automatic writing produced by hand while in a trance state, I haven’t yet found any evidence of other surviving spirit writings produced by planchette. 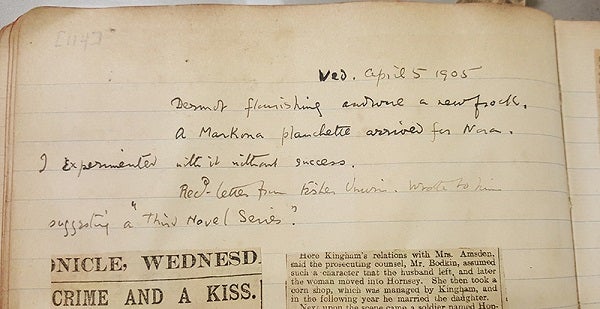 Wilfrid and Nora quickly became enthralled by the spirit writing accomplished using the planchette. Nora was the primary producer of such writing at first. The questions they put to the planchette ranged from where hidden treasure could be found, to whether Wilfrid should write another novel, to the nature of the soul and the afterlife. Wilfrid saved many examples of these, pasting them into his diary along with his interpretations of the writing. Before long, a number of the spirit communicants were tentatively identified as being near or distant deceased relatives. The writings became more verbose and the interpretations more complex. By the 9th of May, Wilfrid had begun to produce spirit writings himself, from the spirit he identified as “Edith,” and he even walked “with Edith” in nearby Kew Gardens. There is a break in the diary from May 17th to Christmas 1905, a period when Wilfrid became “dreadfully ill in mind body and estate,” and Nora took him on a tour of Ireland to aid his recovery. 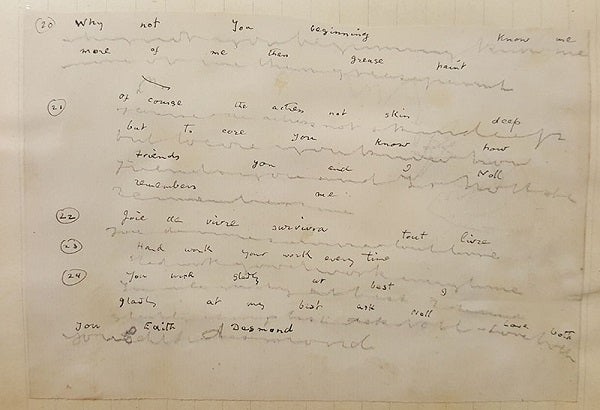 What was Chesson’s take on what he had experienced? The short answer is found in his Christmas entry: “The wisdom that comes to me out of this trial whose effect was to banish me from journalism and send me away from home for five months, is simply: Do not ask advice of strangers.”